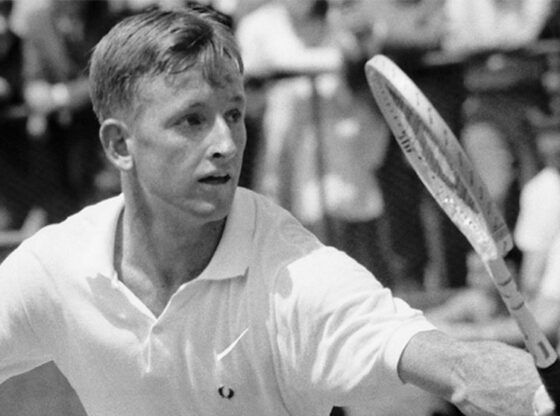 Rodney George Laver is the only player in tennis history to win two Grand Slams.

Born in rural Rockhampton, Queensland, Australia, on August 9, 1938, Laver was the third of four children born into a tennis family. His father, Roy, was a cattle rancher and butcher who was one of 13 children, all tennis players. Roy met his wife, Melba Roffey, in Dingo—less than a two hour drive from his ranch–where she was playing in a tennis tournament. The Lavers had a court on their property and young Rodney was introduced to tennis at six, playing with a hand-me-down wooden racquet with a sawed-down handle. At 13, he narrowly lost to his older brother, Bob, in the final of the Central Queensland Championship despite being barely tall enough to see over the net. Shortly thereafter, he was selected to attend a tennis camp sponsored by a Brisbane newspaper and met Harry Hopman, captain of Australia’s Davis Cup team and legendary instructor. Hopman liked Laver’s grit and determination, gave him the nickname “Rockhampton Rocket” and tutored him. At 15, Laver quit school, moved to Brisbane to work on his tennis full time, and started working for Dunlop Sporting Goods Company. Three years later, he stormed onto the American tennis scene and won the United States junior championship. After serving in the Australian Army in 1957, Laver helped Australia beat the U.S. in the 1959 Davis Cup matches and, as an unseeded player, reached the singles final at Wimbledon before losing to Alex Olmedo.

Laver won his first major singles title at the Australian Championships [now Open] in 1960. The following year, he captured his first Wimbledon singles crown. In 1962, Laver became the first player since Don Budge to win all four Grand Slam singles titles in the same year—a feat Budge accomplished one month after Laver was born in 1938—and went on to win 18 more events. After winning another Davis Cup with Australia, Laver turned pro in December 1962. During the next seven years, he won the U.S. Pro Tennis Championships five times. In 1965, he won 17 titles and was the top-ranked player in the world. The following year, he won 16 events and followed that with 19 titles in 1967. Prior to 1968—the dawn of the “open era” of tennis—professionals were not allowed to play in Grand Slam events. Laver won his third Wimbledon crown in 1968 and claimed his second Grand Slam the following year, this time as a pro. He entered 32 tournaments in 1969, winning 17 of them, and compiled a 106-16 match record. From 1966 to 1970, Laver won 19 consecutive events on the pro circuit and, in 1971, became the first tennis millionaire, earning $300,000 in prize money—an amount unheard of up to that time. From 1970-75, “Rocket” won 44 titles, earning enough in winnings, endorsements and sponsorships to pave the way for modern tennis. The left-hander retired in 1976.

Rod Laver was the greatest tennis player of the 20th century. He won 228 career titles, was 771-213 overall and 536-136 in singles. Laver was 20-4 in Davis Cup play, winning five times and was the number one-ranked player in the world for four years. He won 11 of 16 major singles titles and two Grand Slams, totals that he would likely have doubled had he been eligible between 1963 and 1967. Although diminutive at 5’8”, 145 pounds, Laver introduced power tennis, turning topspin into an offensive weapon and using aggressive play and rapid movement to excel from the baseline. “Rocket” was a left-hander whose left wrist was one inch larger than his right. His left forearm was the same size as heavyweight champion Rocky Marciano and over an inch larger than boxer Floyd Patterson [Daily Dose, August 18]. He calls Wimbledon the “Greatest tennis club in the world” and considers Roger Federer [Daily Dose, July 6] the greatest men’s tennis player of all time. Rod Laver holds the record for most titles won in a single year in the amateur era, touring pro era and open era. He is a member of the Sports Australia and International Tennis Halls of Fame, is classified an Australian National Living Treasure, and is a member of the Order of the British Empire [MBE]. In 2000, Centre Court Stadium at Melbourne Park—home of the Australian Open—was renamed Rod Laver Arena.

On this date in 1969, Rod Laver beat Andres Gimeno [6-3,6-4,7-5] to win the Australian Open, the first leg of his second career Grand Slam and first as a professional.

“I remain unconvinced that there was ever a better player than Rod Laver.”– Tennis writer and historian Bud Collins