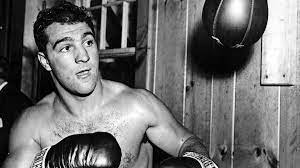 Rocco Francis Marchegiano is the only boxing champion to ever retire undefeated.

Born in Brockton, Massachusetts on this date in 1923 as one of six children born to Italian immigrants, he played football and baseball at Brockton High School before dropping out after 10th grade in order to work as a laborer. He was drafted into the U.S Army in 1943 and was stationed in Wales, where he helped ferry supplies across the English Channel to Normandy. After the war, he completed his service at Fort Lewis, Washington and took up boxing, winning the 1946 Amateur Armed Forces boxing tournament before being discharged later that year. Still in pursuit of his boyhood dream of playing professional baseball, Marchegiano tried out as a catcher for the Chicago Cubs in 1947 but was cut and returned to Brockton to pursue a boxing career.

Marchegiano was 8-4 as an amateur before stepping into the ring for the first time as a professional on March 17, 1947 when he knocked out Lee Epperson in three rounds. He immediately returned to the amateur ranks and lost in the Golden Gloves All-East Championship Tournament one year later. He competed in the AAU Olympic tryouts in the Boston Garden that spring but withdrew due to a hand injury. It was his last fight as an amateur. Marchegiano began his professional career permanently in July of 1948 with a win over Harry Bilzerian. He won his first 16 fights by knockout, nine of them in the first round and did not have an opponent go the distance against him until his 17th fight, a unanimous decision over Don Mogard at the Rhode Island Auditorium on May 23, 1949. During this time, a ring announcer in Rhode Island could not pronounce “Marchegiano” so his manager suggested the name be shortened to “Marciano”.

Rocky Marciano continued his rise through the heavyweight division, winning his first 37 fights before facing an aging Joe Louis, his boyhood idol, in Madison Square Garden in 1951. Marciano upset the 37-year old former champion with an 8th round knockout in what would be Louis’ last fight. He fought four more times before earning a title shot against heavyweight champion “Jersey” Joe Walcott in September of 1952. “The Brockton Blockbuster” knocked Walcott out in the 13th round after being behind on every judge’s scorecard to become World Heavyweight Champion. The two squared off eight months later in a rematch at Chicago Stadium and Marciano retained his title by knocking out his 39-year old challenger in the first round. Marciano defended his title five times, including back-to-back wins over former heavyweight champion Ezzard Charles, before retiring following his knockout of Archie Moore in his 49th and final bout.

“The Rock From Brockton” announced his retirement on April 27, 1956. He was 32 years old and had compiled a record of 49-0, 43 by KO, the highest knockout percentage in heavyweight history. He died in a small private plane crash on August 31, 1969, onthe eve of his 46th birthday. He was named “Fighter of the Year” by Ring magazine three times over the course of his nine year career and was awarded the Hickok Belt as best professional athlete in America in 1952. He is a member of the International Boxing Hall of Fame and World Boxing Hall of Fame and in 2005 was voted fifth greatest heavyweight of all time by the International Boxing Research Organization. ESPN.com rated Rocky Marciano # 14 on its list of greatest boxers of all time in a 2007 poll. He was the inspiration for the “Rocky Balboa” character in Sylvester Stallone’s classic Rocky movie series. 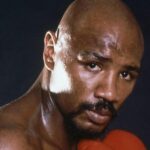 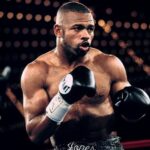 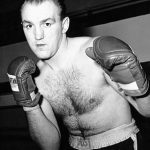 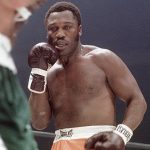 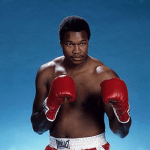 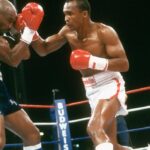 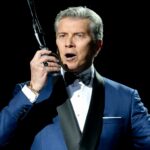