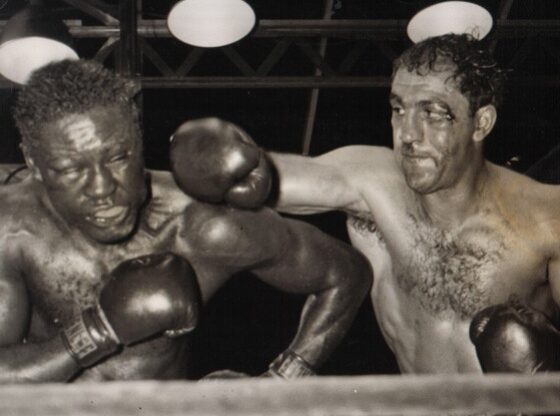 “Why waltz with a guy for ten rounds if you can knock him out in one?”

Rocky Marciano is the only boxer in heavyweight history to retire as the undefeated champion.

Known for his relentless fighting style, stamina, durable chin, and formidable power, Marciano held the world heavyweight title from 1952 to 1956.  He compiled a record of 49-0, 43 by knockout, and defended his title six times.  A late bloomer with little training and a short amateur career, Marciano was a swarmer, slugger and a brawler inside the ring.  A crude fighter who lacked the grace of Joe Louis or Muhammed Ali, the wild-swinging Marciano had an awkward style.  But he was tough.  A heavyweight legend, he beat every opponent he ever faced.

Rocky Marciano was the inspiration for the name and fighting style of Rocky Balboa, the title character from Sly Stallone’s Rocky movie series.  The three-time fighter of the year had his punch scientifically tested by Boxing Illustrated.  In December 1963, the magazine revealed their findings, saying, “Marciano’s knockout blow packs more explosive energy than an armor-piercing bullet and represents as much energy as would be required to spot lift 1,000 pounds one foot off the ground.”

Marciano, who holds the record for longest undefeated streak by a heavyweight, has the highest knockout percentage [87.76%]  of any heavyweight champion in history.  He was only knocked down twice in his professional career: first by Jersey Joe Walcott and later by Archie Moore.

A high school football and baseball player, Marciano dropped out of Brockton High in tenth grade.  He worked a variety of odd jobs, including sweeping floors at the shoe factory where his father, Pierino, worked.  In 1943, he was drafted by the U.S. Army and sent to Wales.

While awaiting discharge in March 1946, Marciano took up boxing.  He won the 1946 Amateur Armed Forces boxing tournament, then stepped into the ring as a professional on St. Patrick’s Day 1947.  Fighting in Holyoke, Massachusetts, as “Rocky Mackianno,” he knocked out Lee Epperson in three rounds.  A few weeks later, Marciano traveled to North Carolina to try out as a catcher for the Chicago Cubs farm team there.  Unable to throw accurately to second base, he was cut, and returned to Brockton to pursue boxing.

Rocky Marciano fought under his own name as a professional for the first time July 12, 1948, beating Harry Bilazarian in the first round.  He won his first 16 fights by knockout, all before the fifth round, and nine before the end of the first round.  In March 1950, Marciano faced Roland La Starza, who came into the bout at 37-0.  Marciano won by split decision in what would be the closest fight of his career.

On October 26, 1951 – three weeks after Bobby Thomson hit “The Shot Heard ‘Round the World” to give the New York Giants the pennant, The Rock faced an aging Joe Louis in Madison Square Garden  Millions of dollars in arrears to the IRS, the 37-year-old Louis accepted the match needing the $300,000 payday.  Reluctant to step into the ring with his idol, who was well past his prime, Marciano told his handlers, “This is the last guy on Earth I want to fight.”  Before the eyes of the nation, Louis — the greatest fighter in heavyweight history — took a vicious, savage beating.  Marciano knocked his hero out in the eighth, then cried in Louis’ dressing room after the fight.

Now the top challenger in the division, Marciano took his 42-0 record into the ring to face Jersey Joe Walcott for the heavyweight championship of the world in September 1952.  Well behind in points before a capacity crowd at Municipal Stadium in Philadelphia, Marciano caught Walcott with an overhand right in the 13th, knocking the champ unconscious.

The two met in a rematch in Chicago eight months later, with Rocky Marciano knocking Jersey Joe out in the first round.  The Rock would defend his title five more times.  In July 1954, he won a decision over Ezzard Charles, then almost lost in a rematch later that year before recovering to knock Charles out in the eighth.  Marciano’s last bout came against Archie Moore at Yankee Stadium.  More than 400,000 watched on closed-circuit television as Marciano knocked out the Mongoose in the eighth round to run his record to 49-0.

Marciano retired as a prizefighter at 32.  Wanting to spend more time with his family, he explained, “I thought it was a mistake when Joe Louis tried a comeback.  No man can say what he will do in the future, but barring poverty, the ring has seen the last of me.  I am comfortably fixed, and I am not afraid of the future.”  After his retirement, Marciano worked as an actor, hosted a weekly televised boxing show, and worked as a boxing referee and commentator.  He built a custom home in Fort Lauderdale and was a partner in a restaurant chain. On the day before his 46th birthday, Marciano was a passenger in a single-engine Cessna 172-H that was headed from Chicago to Des Moines, Iowa.  The Brockton Blockbuster intended to deliver a speech, then return to Florida the following day to celebrate his birthday at home with family.  The plane crashed in a storm 30 miles east of Des Moines, killing all three people – including the pilot — aboard the aircraft.  Marciano was survived by his wife of 19 years, Barbara, and their two children.

The finest Italian-American fighter who ever lived, Rocky Marciano was named the fifth-greatest heavyweight of all time by the International Boxing Research Organization in 2005.  In 2007, ESPN.com ranked him 14th on its list of the 50 Greatest Boxers of All Time.  A member of the International Boxing Hall of Fame and World Boxing Hall of Fame, Mr. Marciano received the 1952 Hickok Belt as top professional athlete of the year.

“What could be better than walking down the street knowing that you’re the heavyweight champion of the world?”