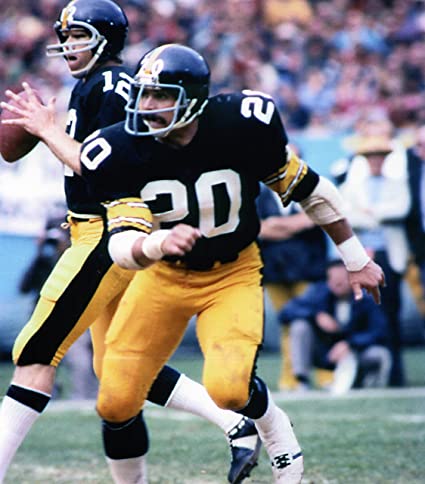 The Rocky Bleier story is a gripping tale of courage and determination.

After leaving the NFL to serve in Viet Nam, Bleier had part of his foot blown off by an enemy grenade.  He was told his football career was over but never gave up, returning to the league and becoming a four-time Super Bowl champion with the Pittsburgh Steelers.

A recipient of a The Bronze Star, Purple Heart and Combat Infantryman Badge, Bleier played in 150 regular season games after returning from Viet Nam.  In 11 NFL seasons, his teams won 13 of 15 postseason games, including four Super Bowls.

The Rock retired at 34 as the Steelers’ fourth all-time leading rusher.  He scored 30 NFL touchdowns, the longest of which was a 70-yard romp against the Cleveland Browns in 1979.  Bleier rushed for 3,865 career yards and caught 136 passes for 1,294 more.

His best season came in 1976, when he gained 1,036 yards to become, with Franco Harris, the second backfield tandem in history to each rush for over 1,000 yards in the same season.

Born in Appleton, Wisconsin – a paper mill town situated along the Fox River and home of Harry Houdini – on this date in 1946, Robert Patrick was the eldest of Bob and Ellen’s four children.  The parents ran Bleier’s Bar, and the family lived above it.  When the bar’s patrons would ask Bob Bleier about his newborn son, the proud father would say the infant “looked like a little rock sitting in that crib.”  The “little rock” became Rocky, and the name stuck.

Bleier attended at Xavier High School, where he was a team captain and standout in in basketball and track.  A two-way football player, Bleier was a three-time All-State selection at running back and twice made All-Conference as a defender.

A solid blocker, reliable pass catcher and nifty runner, the 5’11”, 210-pounder enrolled at Notre Dame.  As a junior, he led the team in rushing during the “Game of the Century,” an epic showdown between top-ranked Notre Dame and number two Michigan State that ended in a 10-10 tie and sealed the 1966 national championship for the Fighting Irish.  Bleier then served as team captain as a senior.

The Pittsburgh Steelers selected Bleier in the 16th and final round of the 1968 NFL/AFL Draft, 417th overall.  A perennial bottom-dweller, the Steelers were coming off a league-worst 2-11-1 season.  Owner Art Rooney, who was a devout Catholic, insisted on drafting Bleier, believing the undersized running back was also Catholic [despite attending a private Catholic high school and college, Bleier was actually Presbyterian.

Bleir played sparingly as a rookie, gaining 39 yards on six carries and catching three passes.  With two games remaining in the season, Bleier learned he had been drafted into the Army.  In May 1969, he was shipped to Viet Nam, where he served as a grenade launcher for Company C in the 196th Light Infantry Brigade.

On August 20, while on patrol in Heip Douc in South Vietnam, Bleier’s platoon was conducting a rescue mission when it was ambushed in a rice paddy.  An enemy bullet went through his left thigh, missing the bone.  After scrambling for cover, a grenade exploded at Bleier’s feet, badly injuring his right foot, knee and thigh.

Four soldiers carried Bleier to safety on a pancho liner, each holding a corner.  He was flown to a Tokyo hospital and underwent surgery – one of several he’d undergo to address his injuries — to remove more than 100 pieces of shrapnel from his right foot and leg.  The grenade cost Bleier part of his foot and doctors told him playing football “would be impossible.”

Shortly thereafter, Bleier received a postcard from Mr. Rooney which read “Rock – the team’s not doing well.  We need you.  Art Rooney.”  Rather than waiving his halfback, Rooney put Bleier on injured reserve for the 1970 season.  “When you have somebody take the time and interest to send you a postcard,” Bleier later said, “you have a special place for those kind of people.”

When Bleier was discharged from the military in July 1970, he was 30 pounds below his playing weight and couldn’t walk without pain.  He rejoined the Steelers, was placed on waivers twice, then earned a spot playing on special teams.

Following a rigorous offseason training program in 1974, The Rock became a Steelers starter.  It was a spot he would not relinquish until he retired in 1980.

Rocky Bleier is an author, actor and motivational speaker.  His 1975 autobiography Fighting Back: The Rocky Bleier Story, became a made-for-television movie.  Bleier has starred in The Play, a one-man stage performance in Pittsburgh theaters.

As a former NFL player and war veteran, Mr. Bleier is clear on his views regarding players’ protests during the National Anthem.  “This is a workplace, you are at the stadium, you are working that day, this is not a platform for protest.  You have off days, you can do it outside the stadium or on other platforms, but not the gameday platform.”