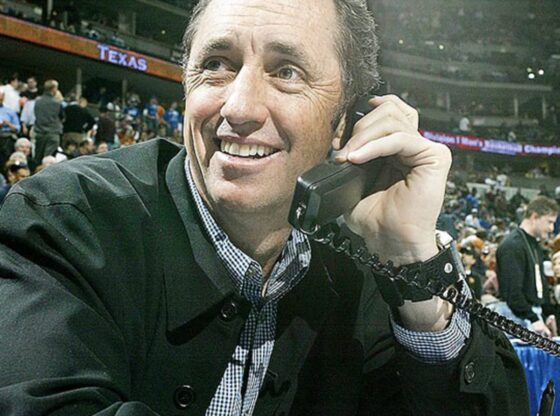 “Exactly how intricate a sport is jogging?  You were two years old.  You ran after the cat.  You pretty much had it mastered.”

Rick Reilly is the most-read sportswriter of his generation.  USA Today called Reilly “the closest thing sports writing ever had to a rock star.”  In a career than spanned 36 years, Reilly made readers laugh, cry and wonder in amazement about the people he introduced them to.  The father of three has been described as witty, irreverent, opinionated and honest.  The New York Times described him as “one of the funniest humans on the planet.”  They were right — Reilly is funny.  Laugh-out-loud funny.

“Golf is the cruelest game, because eventually it will drag you out in front of the whole school, take your lunch money and slap you around.”

For nearly 23 years — from 1985 to 2007 — Rick Reilly’s writing graced the pages of Sports Illustrated.   He anchored the back page column, Life of Reilly, which defined his career at the magazine.  It was the first signed weekly opinion column in the history of the publication.  In seven of the ten years he wrote the column, Reilly was named National Sportswriter of the Year.  He won the award 11 times.  Only Reilly’s idol and mentor, the legendary Los Angeles Times sports journalist Jim Murray, has more, with 14.

“The best thing ever to happen to marriage is the pause-live-TV button.”

The youngest of four children born to an alcoholic father and a terrified mother who spent much of her time protecting their children from their father’s rage, Richard Paul Reilly was born February 2, 1958.  The baby of the family, Reilly was the mascot – the funny one.

He began his career in 1979 working for his hometown Boulder Daily Camera while a sophomore at the University of Colorado, from which he graduated in 1981.  Reilly wrote for two years at the Camera, two more at the Denver Post and two more for the Los Angeles Times before moving to Sports Illustrated in 1985.

Reilly’s work was unparalleled.  First a feature writer and later a columnist, his prose has been recognized by the prestigious New York Newspaper Guild’s “Page One Award.”  During the Steroid Era, one of the darkest periods in MLB history, Reilly correctly called out Sammy Sosa and Barry Bonds for blatant PED use.  But he was not always right.  In January 2013 — after years of denials — Lance Armstrong confessed to using illegal PEDs.  Reilly had staunchly defended Armstrong, believing the cyclist’s lying proclamations that he was clean.  Hurt and embarrassed, Reilly criticized Armstrong in his ESPN.com column of January 17, saying that he had spent “14 years polishing a legend that turned out to be plated in fool’s gold.”

In May 2006, Rick Reilly wrote a single column that changed the lives of millions.  In that piece, Reilly asked SI readers to send ten dollars each to provide malaria nets to kids in Africa.  It created a foundation called Nothing But Nets, which raised $ 100,000 in the first week.  Today, the cause has raised over $ 50 million.

“I write the story that nobody reads.  Someday, I’m going to write it in German to see if anyone notices.”

After leaving SI in 2007, Reilly wrote for ESPN.com and ESPN The Magazine, where he continued to write Life of Reilly until 2010.  Reilly delivered essays for ESPN’s SportsCenter as well as from live sporting events.  He hosted 16 episodes of Homecoming with Rick Reilly, an hour-long television show in which he would interview popular American sports figures in front of a live audience in the subject’s home town.  Reilly penned his last column in 2014 to focus on books and screenplays.

Author of 11 books, including Tiger, Meet My Sister: And Other Things I Probably Shouldn’t Have Said, Reilly won the 2009 Damon Runyan Award for outstanding contributions to journalism.

“I’m afraid Wisconsin is you, Nebraska, only with much better parties and more wins.”

Rick Reilly has come full circle.  What started with winning a sportswriting contest as a kid culminated with his induction into the National Sportswriters and Sportscasters Hall of Fame in 2014.  With John Elway as his presenter, Reilly joined his heroes — Murray, Red Smith and Damon Runyon — in having sports journalism’s highest honor bestowed upon him.

Mr. Reilly wrote his last column June 10, 2014, then, for the first time in his life, spent Father’s Day with his kids instead of covering the U.S. Open golf tournament.

“Never let anyone tell you sports doesn’t matter.  Never let them tell you it’s all about the wins, the losses and the stats.  Sports is so much more than that.”

To read some of Rick Reilly’s most memorable work, click here: https://www.si.com/vault-authors/rick-reilly