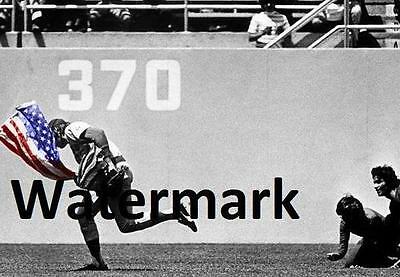 Today marks the 43rd anniversary of Rick Monday’s Run for Old Glory – the day he saved the flag from being burned at Dodger Stadium.

After earning All-America and College Player of the Year honors, the Kansas City Athletics chose Monday with the top pick of the inaugural MLB draft in 1965.  Following one season with Single-A Lewiston, the 19-year-old centerfielder joined the U.S. Marine Corps reserves, where he served six years.  He made his major league debut in 1966.

A two-time All-Star, Monday hit the game-winning home run in the ninth inning of the decisive game of the 1981 NLCS to give the Dodgers the pennant.  In the year of Fernandomania, L.A. went on the beat the Yankees in the World Series.

The smooth left-hander retired in 1984 with a .264 lifetime batting average.  In nearly two decades in the big leagues, Monday collected over 1,600 hits, belted 241 home runs and drove in 775 runs.  He enjoyed his greatest success against Tom Seaver – arguably the best pitcher of his generation.  Monday batted .349 off Tom Terrific, going 30-for 86 with 11 homers.

In its Bicentennial year, America was a country reeling from the embarrassment of Watergate and humiliation of losing the Vietnam War.

On this date in 1976, Rick Monday performed his own Patriot Act.  It came on a hazy Sunday afternoon in Los Angeles, where the Cubs were concluding an early-season series with the Dodgers.  While warming up with left fielder Jose Cardinal in the middle of the fourth inning Monday, who had scored in the third to give the Cubs a 1-0 lead, noticed one person – and then another – run onto the field.

The men unfurled the American flag like a picnic blanket on the outfield grass in left-center.  As the smell of lighter fluid wafted through the air, they knelt over the flag and tried to light it.  The wind blew out the protestors’ first match.  They struck a second one and set the match to the material just as Monday bolted toward them and snatched it out of their hands.

If you’re going to burn the flag, don’t do it around me.  I’ve been to too many veterans’ hospitals and seen too many broken bodies of guys who tried to protect it.

Monday ran to the home dugout and handed the flag off to Dodgers pitcher Doug Rau, who had come out to get it.  Tommy Lasorda raced toward the outfield from the third base coach’s box and cussed out the would-be flag burners.  The sodden flag, unlit, was preserved as the crowd broke into impromptu versions of God Bless America.

When Monday came to bat in the top of the fifth inning, the 25,167 in attendance rose to their feet to applaud the Star-Spangled hero.  The Dodger scoreboard read: “Rick Monday – You Made a Great Play!”  A grainy photo of Monday’s snag was captured by the late James Roark, a photographer for the now-defunct Los Angeles Herald-Examiner.  Famed sportswriter Jim Murray called it “the most famous picture if it’s kind since the flag raising at Iwo Jima,” while The Sporting News described it as “Paul Revere at full gallop.”

The intruders were escorted off the field by security.  The instigator was William Errol Thomas, an unemployed 37-year-old from Eldon, Missouri.  His accomplice was his 11-year-old son.  Elder, who was attempting to draw attention to what he claimed was his wife’s imprisonment in a Missouri mental institution,  pleaded guilty to trespassing and was sentenced to three days in jail and one year probation.  His son, whose name was not divulged because of his age, was held in juvenile hall.

Monday has been offered as much as one million dollars to sell the flag but has declined all offers.

Although the Dodgers won the game 5-4 in ten innings, it was an outstanding day for Monday.  He went 3-for-5 with two runs scored and an RBI, which tied the game in the eighth.  The Bicentennial season was Monday’s best.  The southpaw posted career highs in home runs [32], runs [107] and RBI [77].  He was traded to the Dodgers the following season, where he played for Lasorda, who had replaced Walter Alston as manager.

In the aftermath of Monday’s heroics in Dodger Stadium in 1976, Mayor Richard J. Daley named the Cubs’ leadoff hitter grand marshal of Chicago’s Salute to the American Flag parade later that summer.  President Ford awarded him with a Bicentennial Commendation.  Former Dodger vice president Al Campanis called the ex-Marine outfielder “Mr. Red, White and Blue.”  In 2008, Monday was presented a flag flown over Valley Forge National Park at a ceremony at Dodger Stadium in honor of his bicentennial rescue.

I still get goosebumps.  The fans made it clear they had a total dislike for what those guys were trying to do.  The crowd reaction was inspiring.

Rick Monday became an icon to millions of American war veterans and their loved ones.  A broadcaster with the Dodgers since 1985, he never tires of answering questions about the memorable day.  The flag he saved was presented to him on Rick Monday Day during a pregame ceremony at Wrigley Field in May 1976.  The baritone broadcaster still has the well-worn flag, which he keeps in a safe deposit box.  Today, Monday travels the country bringing the flag to military hospitals, parades and charity events raising money and awareness for wounded soldiers.

In 2000, the Baseball Hall of Fame named Rick Monday’s quick-thinking act one of the 100 classic moments in the history of baseball.