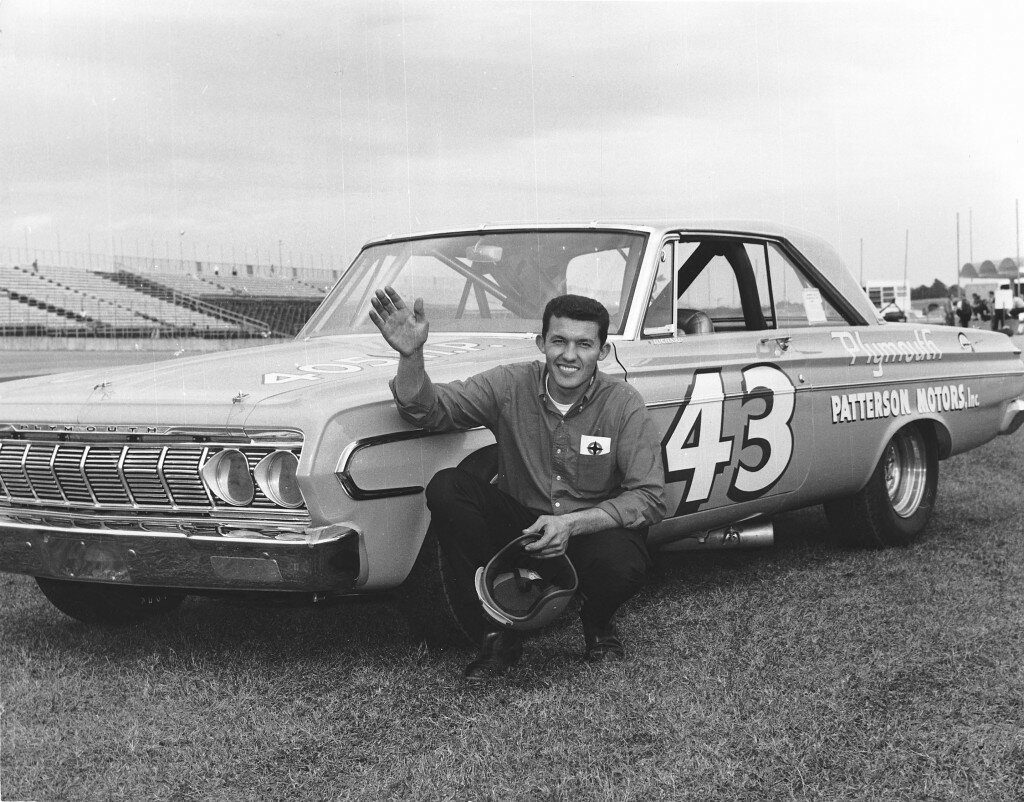 Richard Lee Petty is the greatest stock car driver of all time, and it’s not even close. Born on July 2, 1937 into a racing family in Level Cross, North Carolina, he is the older of two boys born to Elizabeth and Lee Petty. Richard’s brother, Maurice, is 21 months younger and had a brief driving career from 1960-64 before becoming one of the top engine builders in auto racing. Lee Petty was a stock car driver in the 1950s and 1960s and was one of the pioneers of the National Association for Stock Car Auto Racing [NASCAR], competing in its first race at the Charlotte Speedway, winning the circuit’s championship three times and taking the checkered flag at the inaugural Daytona 500 in 1959. Richard entered his first race on July 18, 1958, just days past his 21st birthday, in Toronto and crashed on lap 55 to finish in 17th place out of 19 drivers while earning $ 115. He raced in nine events that year and did not lead even one of the 977 laps he completed to finish the season in 37th place. The following year, Petty had nine top-10 finishes and was named Rookie of the Year. In 1960, he won his first race—in Charlotte—and went on to win three events that season to finish second in the Grand Nationals Points Race. Four years later, he captured his first Daytona 500, the most prestigious race in NASCAR, en route to nine victories and his first Grand National Championship [now Sprint Cup Series] by earning the most points during the season for finishing position and laps led. In 1966, Petty became the first driver to win the Daytona 500 twice. The best year of Richard Petty’s career was 1967. He won 27 of the 48 races he entered, a NASCAR single-season record, including ten in a row [also a record] and claimed his third Grand National Championship, earning him the nickname, “King Richard.” Petty reeled off 44 wins over the next three years and had the second-best season in stock car racing history when he took the checkered flag 21 times in 1971 and became the first driver to earn more than $ 1 million in career earnings while earning his third Winston Cup. In 1972, Petty began what would become a successful 28-year sponsorship with STP and his 43 car went from the all “Petty blue” paint job to the now-familiar STP orange/”Petty blue” scheme. He won at Daytona for the third straight year in 1974 and won 13 races the following season en route to his sixth Cup Series crown. In 1978, “The King” went winless for the first time in 19 years. He came back to win Daytona the following year and again in 1981, outfoxing Bobby Alison to grab his seventh and final Daytona 500 victory. Dale Inman, Petty’s longtime crew chief, left the team after the Daytona victory and Mr. Petty would win just seven more races in his career, including his final victory at the Firecracker 400 at Daytona Speedway on July 4, 1984. Richard Petty won 200 races in his 26-year career, nearly twice as many as David Pearson, the next driver on that list. He started a record 1,184 races and finished in the top ten in 712 of them. Petty won seven Winston Cups, tying him with Dale Earnhardt for most of all time, and is the all-time poles leader with 123. Mr. Petty was voted NASCAR’s Most Popular Driver eight times and, along with his brother and father, is a member of the NASCAR Hall of Fame. His only son, Kyle, won eight races and had 173 top-ten finishes on the NASCAR circuit. Richard Petty was awarded the Presidential Medal of Freedom in 1992 and was named, along with his father, as one of NASCAR’s 50 Greatest Drivers in 1998 as part of its 50th anniversary celebration. He is currently an owner of Petty Motorsports, a two-car race team based in Mooresville, North Carolina.

“Cats know, comin’ out of four, they better be standin’ on it, else they’ll be standin’ in it.”– Richard Petty