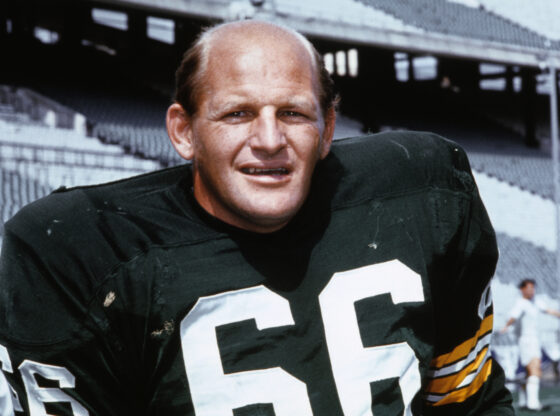 The Green Bay Packers won five NFL titles between 1961 and 1967. Raymond Ernest Nitschke anchored the defense for every one of them.

Born in Elmwood Park, Illinois—a few miles west of Chicago—on this date in 1936, Nitschke was the youngest of three boys. His father was killed in a car accident when Ray was three and his mother died of a blood clot when he was 13, so his brothers, 21 and 17 at the time, raised him. The loss of his parents enraged Nitschke, who got into fights and challenged authority while growing up. He attended Proviso East High School—alma mater of NBA stars Glen “Doc” Rivers and Micheal Finley—in nearby Maywood, where he was a three-sport standout his freshman year. Rebellious and angry, Nitschke’s grades slipped and he was ruled academically ineligible his sophomore year. He returned as a junior, where he played quarterback and safety on the varsity football team while setting scoring records in basketball. In his senior year, he led the Pirates to the state baseball championship and was offered $ 3,000 to sign with the St. Louis Browns [now Baltimore Orioles] but turned it down in order to pursue his dream of playing football in the Big Ten Conference and leading his team to the Rose Bowl.

Ray Nitschke accepted a football scholarship to the University of Illinois and arrived in Champaign in the late summer of 1954. During Nitschke’s sophomore season, Illini head coach Ray Eliot moved him from quarterback to fullback, as the offensive backfield was decimated by injuries, while also playing him at linebacker. Nitschke’s sour demeanor served him well as a defensive player and he blossomed at linebacker. Illinois only had one winning season in his four years in Champaign and Nitschke never fulfilled his dream of playing in the Rose Bowl, but his play earned the respect of pro scouts. By his senior year, legendary Cleveland Browns head coach Paul Brown considered Nitschke the best linebacker in college football.

Ray Nitschke had grown up idolizing his hometown Chicago Bears but it was the Green Bay Packers that selected him in the third round of the 1958 NFL Draft with the 36th overall pick. The Packers had a pivotal 1958. First, scouting director Jack Vainisi selected two future Hall of Famers—Jim Taylor and Ray Nitschke—along with perennial Pro Bowlers Dan Currie, Jerry Kramer and Ken Gray. Next, Vainisi convinced New York Giants offensive coordinator Vince Lombardi to take the head coaching job in Green Bay following the 1958 season. In 1960, the Packers made it to the NFL Championship game before falling to the Philadelphia Eagles, 17-13. It would be the only playoff game that Vince Lombardi would ever lose, as they won five championships in the next seven years.

Nitschke was ferocious, roaming sideline to sideline while leading the defense. He recovered two fumbles and forced an interception to earn MVP honors—and the 1963 Chevrolet Corvette that accompanied the award–in the 1962 NFL Championship Game and was a first team All-Pro selection in 1964, 1965 and 1966. He led the Packers to a victory over the Dallas Cowboys in the famous “Ice Bowl”–the 1967 NFL Championship Game—and captained the Packers to wins in the first two Super Bowls before retiring in 1972.

The gruff and tough Ray Nitschke personified Vince Lombardi’s Green Bay Packers. He anchored the Packers defense and was one of the most fearsome middle linebackers in the history of pro football. Nitschke’s gritty style, ferocious tackling and toothless scowl struck fear in the hearts of his opponents. “Number 66” recorded 25 interceptions and 23 fumble recoveries in 15 NFL seasons. As violent as he was on the field, he was even more gentle and caring off of it and is one of the most popular Packers ever. Ray Nitschke was elected to both the NFL’s 50th and 75th Anniversary All-Time Teams, the only linebacker to earn that distinction. He was listed # 18 on The Sporting News’ list of “100 Greatest Football Players” in 1999, with Lawrence Taylor and Dick Butkus—who followed Nitschke as a middle linebacker at the University of Illinois—as the only linebackers ahead of him. In 1983, the 6’3”, 235 pound Nitschke was elected to the Pro Football Hall of Fame, the first defensive player from the Packers dynasty to be inducted. The Packers retired his number 66 in 1983, the fourth of five numbers ever retired by the organization.

“If you’re not willing to hit people, you don’t belong on the field.”– Ray Nitschke