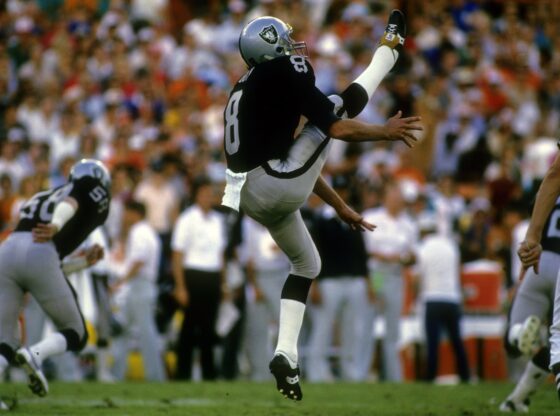 William Ray Guy is the only punter ever elected to the Pro Football Hall of Fame.

Born in Swainsboro, Georgia, the “Crossroads of the Great South,” on December 22, 1949, his family settled in Thomson, about two hours east of Atlanta. Guy attended Thomson High School, where he earned 16 varsity letters playing four sports. As a pitcher, he had good control and regularly reached 98-100 miles per hour with his fastball, attracting enough attention that he was selected in Major League Baseball’s amateur draft in four straight years. When not playing baseball, Guy competed in track, setting school records in the discus throw and triple jump. As a junior, Guy led the Bulldogs to an undefeated season and state football title, breaking his thumb while blocking a PAT in the championship game to seal a 7-6 win. The injury forced him to miss the basketball season but, after leading the football team to another undefeated season and state title as a senior, he returned to score 39 points in the first basketball game he had played since his sophomore year. Guy also punted, averaging 52 yards per kick with a season-long boot of 88 yards in his senior season. When Paul “Bear” Bryant offered a scholarship to punt for the Crimson Tide, Guy declined, citing a desire to punt and continue as a position player at the next level.

Guy accepted a scholarship to Southern Mississippi, playing baseball and football for the Golden Eagles. The 6’3”, 195 pound right-hander threw 14 complete games in 31 starts with 266 strikeouts in 220 innings of work. He also tossed two no-hitters, something major league scouts could not ignore. The Cincinnati Reds drafted Guy in the 14th round in 1969, the Houston Astros picked him in the third round one year later and the Atlanta Braves took Ray Guy in the 17th round in his junior campaign. In football, Guy kicked a 61-yard field goal [then an NCAA record] in a snowstorm against Utah State and set school records for longest punt, single-game average, single-season average and career average. In a game against Ole Miss his senior season, Guy lined up five yards deep in his own end zone and booted a punt that traveled 80 yards in the air before bouncing into and through the Rebels end zone before coming to rest nearly 120 yards later. As a safety, he intercepted a school-record eight passes in 1972 and finished his career with 18, still second-most in school history. Guy led the nation in punting his senior year with a 46.2 yard average to become the first Southern Miss player ever named All-American. His 44.7 yard-per-kick career average remains the best in NCAA history.

After being named MVP of the 1973 College All-Star Game, the Oakland Raiders selected Ray Guy with the 23rd overall pick in the NFL Draft, making him the first punter ever picked in the first round. He also handled kickoffs in place of the aging George Blanda while serving as third-string quarterback. Prior to the 1974 season, the NFL implemented a new rule that allowed only two players [gunners] to release downfield at the snap of the ball, with the remaining nine having to wait for the ball to be kicked before crossing the line of scrimmage. This created a new element to punting, known as “hang time,” that required a kicker to boot it high in order to allow his teammates to cover the kick. No punter in football kicked the ball as high as Ray Guy, and his value was felt immediately. He led the NFL in punting in 1974, 1975 and 1976, was second three more times and was third once. Guy was named to seven Pro Bowl teams—the most of any punter in history—and once booted a ball that hit the hanging scoreboard in the Superdome. He played 14 seasons, all with the Raiders, and averaged over 40 yards a punt in 13 of those years. Guy played in 207 NFL games and did not miss a start. He won three Super Bowls, played in seven AFC Championship games and holds the record for longest [71 yards] and most [111] postseason punts. He was masterful at the corner kick, pinning opponents inside their own 20 yard line 210 times. Only three of his 1,049 career kicks were blocked, including a streak of 619 straight, and he had five punts of over 60 yards during the 1981 season.

Football coaches want three things from their punter; the ability to hit a long punt when deep in their own territory, pin the ball inside their opponents’ 20-yard line, and give coverage teams time to get downfield. No punter in history did those things better than Ray Guy. He is the first and only punter to be selected in the first round of the NFL Draft, is the first punter enshrined into college football’s Hall of Fame and is the first and only punter elected to the Pro Football Hall of Fame. In 1994, Guy was elected to the NFL 75th Anniversary All-Time. Five years later, he was elected to its All-Century Team. Guy is a member of the National High School Sports Hall of Fame and is the first Southern Miss player ever to have his jersey retired, something Brett Favre would experience several years later. The Ray Guy Award is presented annually to college football’s top punter.

On this date in 2014, Ray Guy was elected to the Pro Football Hall of Fame.