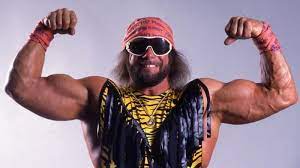 “Macho Man” Randy Savage was one of the greatest pro wrestlers in history.

Randall Mario Poffo was born in Columbus, Ohio, on this date in 1952.  The elder son of Judy, who was Jewish, and Angelo, an Italian-American, Poffo attended middle school in Zanesville, an hour east of Columbus along Interstate 70.

Angelo Poffo played catcher for DePaul University’s baseball team and was a competitive chess player.  A physical education major, he set a world record for sit-ups while serving in the Navy in 1945.  Angelo completed 6,033 [after 6,000 sit-ups he did 33 more, one for each year of Jesus Christ’s life] in four hours and ten minutes.  In 1948, he started wrestling as “The Masked Miser” and a decade later won the NWA United States Heavyweight Championship.  Anthony Poffo wrestled in the 1970s and 1980s under a mask as “The Carpet Bagger.”

In the late 1960s, the Poffo family moved from central Ohio to Downers Grove, Illinois, a quaint village about 30 miles west of downtown Chicago.  Randy attended Downers Grove North High School, alma mater of Cammi Granato, one of the first women inducted into the Hockey Hall of Fame.  DGN was also birthplace of the Daily Dose, as the Publisher honed his craft at the town’s original public secondary school less than a decade after Poffo was a student there.  Poffo was an outfielder for the Trojan baseball team and attracted the attention of some major league scouts.  After graduating from North in 1971, he played in the minor league organizations of St. Louis, Cincinnati and the Chicago White Sox.  “Randy was a super athlete,” recalled Pete Rose, a spring training teammate in 1974. “He was very limber, flexible, so it didn’t surprise me he was a pretty good baseball player.”  Poffo moved from the outfield to catcher, which better suited him, but with a lifetime average of .254, he never rose above Class A ball and, after four years in the minors, was released in 1975.  After weighing his options, Randy Poffo decided to follow in his father’s footsteps and try professional wrestling.

At 6’1”, 195 pounds, Poffo was a muscleman in baseball but was considered skinny for a wrestler.  He worked on his physique and learned the nuances of the sport from veteran grappler “Handsome” Harley Race, who was a family friend.  Randy soon joined the pro circuit, where he took on the ring name “Macho Man Savage.”  He was joined by his younger brother, “Leaping” Lanny Poffo.  In 1978, three years after Savage retired from baseball, Angelo Poffo—who trained both of his sons—started the “outlaw” International Championship Wrestling circuit in the Midwest.  While working the ICW shows, Poffo met and married Elizabeth Ann Hulette. The ICW disbanded a short time later, and Savage signed with Vince McHahon’s World Wrestling Federation [WWF] in June 1985.  Later that summer, Hulette—“Miss Elizabeth”—became his manager and an integral part of his act.

Savage became a staple of the sport early on, making his debut at WrestleMania II.  He won his first WWE Championship in 1988 and later paired with Hulk Hogan [Daily Dose, 8/11/15] to form one of the most formidable tandems ever to set foot in a ring.  Savage went on to dub himself “Macho King” after defeating “Hacksaw” Jim Duggan for the King of the Ring title in 1989.  In 1991, he and Miss Elizabeth very publicly tied the knot during a pay-per-view event billed as “The Match Made in Heaven,” when they exchanged vows in the ring at Madison Square Garden [Daily Dose, 12/15/15].  Savage beat Ric Flair for a second WWE title at WrestleMania VIII before defecting to World Championship Wrestling in 1995.  He also won WCW’s “World War 3” title and later did color commentary for various pro wrestling events.

Macho Man Randy Savage won 29 titles in his 32 year pro wrestling career.  He held six world championships between WWF and WCW and was named by World Wrestling Federation as “Greatest Champion of All Time.”  Savage was noted for bringing a higher level of credibility to the title through his amazing in-ring performances.  Savage was a major pay-per-view attraction in the 1980s and 90s, headlining WrestleMania IV, V, and VIII as well as four of the first five Summerslam shows.  At the height of his popularity, Macho Man held similar drawing power to Hulk Hogan.  Recognizable for his deep and raspy voice, ring attire, and Pomp & Circumstance entrance music, Savage was the consummate showman.  Known for his signature catch phrase was “Oooh, yeah!” Macho Man’s best match took place at WrestleMania III, where he fought Ricky “The Dragon” Steamboat in front of 93,000 fans at the Pontiac Silverdome outside Detroit.

Randall Poffo retired from professional wrestling in 2005.  On the morning of May 29, 2011, he died of cardiac arrhythmia while driving with his second wife, Barbara Lynn Payne, in Seminole, Florida.  Macho Man Randy Savage was posthumously inducted into the WWE Hall of Fame in March 2015, 20 years after his father, Anthony Poffo, was enshrined into the WCW Hall of Fame.

“I’m the tower of power, too sweet to be sour.  I’m funky like a monkey. Sky’s the limit and space is the place.” – Macho Man Randy Savage