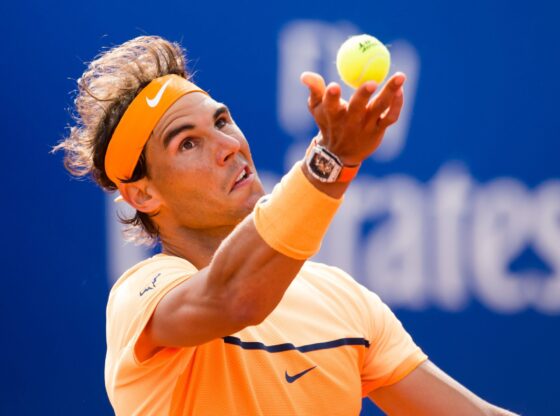 Born in Manacor—the largest of the Balearic Islands off the coast of Spain—on June 3, 1986, he was the older of Sebastian Nadal and Ana Maria Parera’s two children.  He began playing tennis at three, having been introduced to the game by his uncle, Toni Nadal, a former professional tennis player.  At eight, Nadal won an under-12 regional championship.  The right-handed Nadal played forehand shots with two hands, so his uncle encouraged him to begin playing left-handed to gain an advantage.  Nadal was also a talented soccer player.  After winning Spanish and European age group tennis titles at 12, Sebastian Nadal asked his son to choose between soccer and tennis so his schoolwork would not suffer.  “I chose tennis,” Nadal recalled, “football had to stop right away.”  When he was 14, Nadal defeated former Wimbledon champion Pat Cash in a clay-court exhibition match.  The following year, he turned pro, winning his first ATP match in April 2002.  At 16, he reached the semifinals of the Boy’s Singles at Wimbledon, in his first ITF junior event.  The following year, he became the youngest male to reach the third round at Wimbledon since Boris Becker. Nadal was ranked world No. 762 when he joined the Tour in 2002.  Three springs later, he dominated the clay court season, winning 24 consecutive singles matches—including the 2005 Monte Carlo Masters and Rome Masters—to vault to world No. 5.  On his 19th birthday, “Rafa” defeated top-seeded Roger Federer [Daily Dose, July 6] in the 2005 French Open semifinals.  Two days later, he became the second player, after Mats Wilander, to win the French Open [Daily Dose, May 26] on his first attempt.  After claiming the French Open title four straight times, Nadal added a victory at Wimbledon to his resume in 2008, beating Federer in the longest final in Wimbledon history.  He capped the season by taking the gold medal in the 2008 Olympic tournament in Beijing.  Mr. Nadal claimed the one and only Australian Open crown of his career the following year before winning three of four Grand Slam events in 2010, including his first U.S. Open title, giving him the career Grand Slam.  After injuring his knee and taking time away in 2012, many thought Nadal’s career was over.  Several months later, he claimed his eighth championship at Roland Garros in nine starts.  “I never like to compare years,” said Rafa,” but it’s true that this year means something very special to me.  Five months ago nobody on my team dreamed about a comeback like this.”  In 2015, Nadal saw his streak of ten consecutive years with at least one Grand Slam title come to an end, and he failed to win the French Open for the only the second time since 2005. Rafael Nadal has won the French Open a record nine times and has claimed a record 49 clay court titles, earning him the nickname, “The King of Clay.”  Clay courts favor topspin, which Mr. Nadal delivers like no player in history.  A study conducted to measure spin revealed Andre Agassi’s shots to rotate an average of 1,900 times per minute, while Federer’s average was 2,700 revolutions per minute.  Nadal’s topspin rotates an average of 3,200 times per minute.  Roger Federer has won more Grand Slam singles titles than any player in history, yet has not been successful at the French Open, saying, “I don’t think the clay has been my problem.  My problem has been Rafa on clay.”  Nadal’s game is based on tenacity, grit and strength of character, traits he learned from his famously aggressive soccer-playing uncle, known as the “Beast of Barcelona.”  Nadal has won 14 Grand Slam titles, 28 Masters 1000 events and has led Spain to four Davis Cup championships.  The King of Clay won a record eight straight Monte-Carlo Masters titles and, along with Agassi, is one of only two men to win all four majors and an Olympic gold medal in their careers.  In 2011, Mr. Nadal was named Laureus World Sportsman of the Year. On this date in 2010, Rafael Nadal beat Robin Soderling of Sweden [6-4, 6-2, 6-4] to win the Men’s Singles championship at the 109th French Open.  Nadal did not drop a single set during the entire tournament en route to his fifth French Open title.