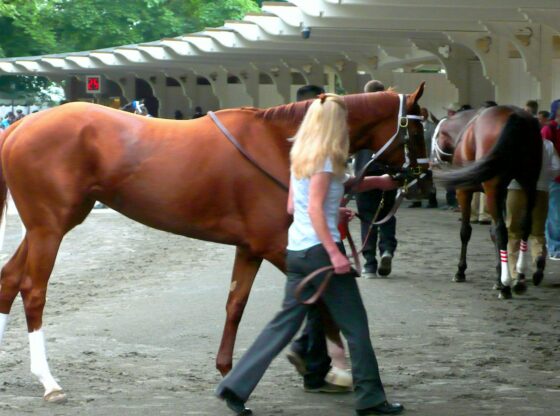 Today we explore some of the best names in the history of thoroughbred racing.

I’ll Have Another has nothing to do with drinking. The chestnut colt’s name was inspired by owner J. Paul Reddam’s reply when his wife asks if he wants more of her fresh-baked cookies. In 2012, the three-year-old won the first two legs of the Triple Crown, then scratched the day before the Belmont Stakes due to tendonitis and retired from racing.

Foaled in 1991, Go For Gin is the second-oldest Kentucky Derby winner, behind Sea Hero. Grandson of Stage Door Johnny, who won the 1968 Belmont to end the Triple Crown bid of Forward Pass, Go For Gin won the 1994 Kentucky Derby before finishing second in both the Preakness and Belmont.

Sunday Silence nearly died twice. First from a freak virus as a weanling, then as a two-year-old, when the driver of his van had a heart attack and flipped the vehicle. The black and brown stallion won the 1989 Kentucky Derby and Preakness before losing the Belmont to Easy Goer, who ran the second-fastest time [behind Secretariat] in Belmont history to win by eight lengths.

In 1921, Behave Yourself was the upset winner of the Kentucky Derby over his stablemate, Black Servant. A mediocre racehorse, he won only four of 18 career starts, with career earnings of less than $ 60,000. Owner Colonel Edward R. Bradley thought his horse had poorly conformed legs and did not want to breed him. Bradley donated Behave Yourself to the United States cavalry, where he sired cavalry horses for the Army until his death in 1937.

The offspring of Really Blue and Quiet American, Real Quiet won the first two legs of the 1998 Triple Crown before losing the Belmont by four inches – the smallest margin in history. Nicknamed “The Fish” by his trainer due to his narrow frame, crooked knees did not prevent this bay stallion from finishing in the money in 17 of 20 races. The 1998 Eclipse Award winner as best three-year-old of the year won over $ 3.2 million in his racing career.

Three-time Horse of the Year Spectacular Bid won 26 of 30 career races and finished in the money 29 times. He won 12 in a row — including the Kentucky Derby and Preakness — leading up to the 1979 Belmont Stakes. The grandson of Step on Red, stepped on a safety pin in the days before the Belmont, causing an infection. He ran despite the injury, losing the lead down the backstretch and finishing third. Legendary jockey Bill Shoemaker said Spectacular Bid was the best horse he ever rode.

Dammed by Fool Me Not and sired by What a Pleasure, Foolish Pleasure won the 1975 Kentucky Derby before finishing second in both the Preakness and Belmont. In July 1975, he famously met the undefeated filly, Ruffian, in a match race at Belmont Park. Before 50,000 fans and 20 million television viewers, Ruffian broke her leg during the race and was later euthanized. Winner of nine stakes races, Foolish Pleasure was inducted into the National Museum of Racing and Hall of Fame in 1995.

In 1990, Genuine Risk became the second filly ever to compete in all three Triple Crown races. She won the Kentucky Derby, then finished second in the Preakness and Belmont Stakes. The granddaughter of British thoroughbred Due Respect, the chestnut mare was one of the top ten female racehorses of the 20th century.

With bloodlines that include Secretariat, Bold Ruler, Seattle Slew and Northern Dancer, Rags to Riches in 2007 became the first filly to win the Belmont Stakes in over a century. The event was voted National Thoroughbred Racing Association Moment of the Year, and earned Rags to Riches a nomination as best female athlete at the 2007 Teen Choice Awards [won by tennis’s Maria Sharapova]. A leg injury ended the chestnut filly’s career in 2008.