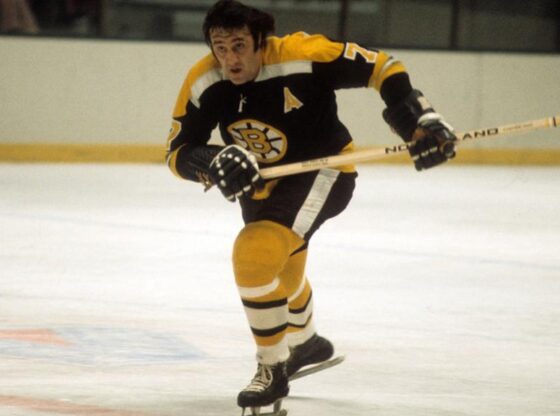 Phil Esposito scored 118 game-winning goals in his hall of fame career, more than any player in National Hockey League history.

Esposito was the greatest goal scorer of his day.  He led the league in goal scoring five times and was second twice.  In the NHL’s first half-century, only four players had scored 50 or more goals in a season, including the great Bobby Hull [Daily Dose, 3/25/16], whose 59 goals in 1961-62 set the mark.  Phil Esposito scored 50 or more goals five times, including 1970-71, when he tallied 76.  Prior to 1968, no player in history had recorded 100 points in a season—Hull held the record with 97.  “Espo” had six 100-point seasons, including 152 in 1970-71, when he handed out 76 assists to go with his 76 goals.  Esposito was the Babe Ruth of hockey, setting scoring records that had never been dreamed of.  He scored over 40 goals in seven straight seasons and had 13 consecutive years in which he scored 30 or more.  Mr. Esposito was the first NHL player to score 1,000 points in a decade [1970s].  The 6’1”, 205-pound centerman holds the record for most shots on goal in a single season [550] and retired as the second leading goal and points scorer in league history, behind “Mr. Hockey”—the legendary Gordie Howe.

Born February 20, 1943, in Sault Ste. Marie, Ontario—across the St. Mary’s River from the Upper Peninsula of Michigan—Phillip Anthony Esposito signed with the Chicago Blackhawks as a teenager.  Like Hull, he played for the St. Catherines Teepees of the Ontario Hockey Association, then spent two seasons with Chicago’s minor league affiliate, the St. Louis Braves.  In his first season in St. Louis, Esposito scored 90 points.  In his second, he tallied 80 points in only 46 games.  The Blackhawks called him up for the final 27 games of the 1964 season and he started at center the following year.  After averaging over 20 goals and 50 points in each of his first three full seasons in Chicago, the Hawks sent Esposito, Ken Hodge, and Fred Stanfield to the Boston Bruins in a six-player deal before the 1967 season.  It was one of the most one-sided trades in history, as the trio became stars, joining the great Bobby Orr [Daily Dose, 8/26/15] to lead Boston to two Stanley Cup titles in three years.

In his first year in Boston, Esposito led the NHL in assists.  In year two, he became the first player to break the 100-point plateau.  After helping the B’s to their first Stanley Cup title in 29 years in his third year with the Bruins, Esposito scored 152 points [breaking his own record of 126] in 1970-71.  In eight-plus years in Boston, Espo won two Stanley Cups, claimed five Art Ross Trophies as the league’s leading scorer, was twice awarded the Hart Trophy as league MVP and was a first-team All-Star five straight times.  A dozen games into the 1975 season, Boston traded Esposito to the New York Rangers.

The Summit Series [Daily Dose, 9/28/15] was an eight-game match between Canada and the Soviet Union held in September 1972.  Canada was expected to win handily.  Series promotor Alan Eagleson said, “Anything less than an unblemished sweep of the Russians would bring shame down on the heads of the players and the national pride.”  Team Canada was coached by Harry Sinden, who had guided the Boston Bruins to the 1970 Stanley Cup title.  “Canada is first in the world in two things,” Sinden said.  “Hockey and wheat.”  After winning only one of the first three games, Team Canada was booed during warm-ups of Game Four in Vancouver.  The situation deteriorated quickly when the Soviets dominated the game to claim a  5-3 victory.  In an emotional post-game interview on national television, team captain Phil Esposito told Canadian fans, “To the people that boo us, all of us guys are really disheartened and were disillusioned and were disappointed in some of the people.  We cannot believe the bad press we got, the booing we’ve gotten in our own  building…we’re here because we love Canada, it’s our home and that’s the only reason why we came.”  The captain’s words galvanized Canada and likely turned the tide in the greatest, most meaningful game of hockey ever played.  When the final four games of the Series moved to Moscow, Esposito was dominant, leading Canada to victory while topping all scorers with 13 points.  He was so good in the Summit Series that his name—Phil Esposito-became a bona fide swear word in the Soviet Union in the aftermath of the event.

While not as glittery an offensive player as he once was, Esposito remained an effective scorer in New York, leading the Rangers in points in each of the five full seasons he played there.  He scored his 600th NHL goal in November 1977, becoming the first player to reach that milestone in a Rangers uniform.  In 1979, the 37-year-old captain led the Blue Shirts to the Stanley Cup Final, where they succumbed to the Montreal Canadiens in five games.  He retired as a player in 1981 as second most prolific goal-scorer in league history and third on the all-time assists list.

Esposito served as general manager and head coach of the Rangers in the late 1980s, earning the nickname “Trader Phil” for the numerous transactions he made.  During his three-year tenure as GM, he made more trades that the Vancouver Canucks had made in the entire decade.  After failing to reach the playoffs in 1989, Esposito was fired by New York.  The following year, he became part of an ownership team that brought an expansion franchise—the Lightning—to Tampa Bay, beginning with the 1992-93 season.

Phil Esposito played 19 NHL seasons, all with Original Six franchises.  He scored 717 goals and 1,590 points in 1,282 regular season games and 137 points in 130 career playoff games.  Although he lacked a graceful style and was a below-average skater, Espo redefined scoring.  Only five players in NHL history have scored more goals than Phil Esposito.  A ten-time All-Star, he was the recipient of the Lou Marsh Award as Canada’s top athlete in 1972 and Lester B. Pearson [now Ted Lindsay] Award as the NHL’s most outstanding player.  Mr. Esposito was elected to the Hockey Hall of Fame in 1984, where he was joined by his brother Tony—a goaltender for Team Canada in the Summit Series and six-time All-Star with the Chicago Blackhawks–four years later.  Sadly, one of the greatest players in Bruins history has no relationship with the franchise—he is an outcast in Boston—yet the the B’s retired his number 7 in December 1987.  Phil Esposito currently serves as color analyst for Tampa Bay Lightning radio broadcasts.

On this date in 1974, Phil Esposito became the sixth player in NHL history to score 500 career goals when he snuck one past Jim Rutherford of the Detroit Red Wings to reach the milestone in his 803rd career game.

Walter Hagen
Running of the Bulls