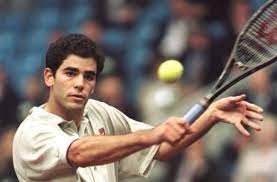 Petros Sampras held the No. 1 ranking in men’s tennis for six straight years, more than any other player in the history of the sport.

Born in Potomac, Maryland on this date in 1971, he began hitting tennis balls against the wall at the age of three. His family moved to Palos Verdes, California in 1978 and the warmer climate allowed him to play more tennis. He played his boyhood idol, the great Rod Laver, when he was eleven and his family joined the Jack Kramer Club, where he met Peter Fisher, who coached him until 1989. He turned professional in 1988 and started the year at World No. 893 but rose to World No. 97 by the end of his first season. Sampras improved in his second year on Tour, winning his first Grand Slam singles match at the French Open in 1989 and defeating defending champion and fifth-seeded Mats Wilander in the second round of the U.S. Open to finish the year at World No. 80. In 1990, he moved from World No. 61 to World No. 5 and won his first singles title in Philadelphia. He captured his first Grand Slam title with a victory in the U.S. Open, defeating Ivan Lendl, John McEnroe and Andre Agassi along the way to become, at age 19, the youngest-ever U.S. Open male singles champion.

He failed to defend his U.S. Open title in 1991 but went on to win Wimbledon and the U.S. Open in two years later, a season in which he rose to World No. 1. He set a new ATP record that year by becoming the first player to serve more than 1,000 aces in a season. Except for a loss in the 1996 quarterfinals, Sampras continued to win at Wimbledon for the rest of the decade, winning 7 singles titles in all, a feat matched only by Roger Federer. He won 40 of the 42 matches he played at Centre Court and 63 of the 70 matches he played at the All England Club. He won the Australian Open twice, in 1994 and 1997 and the U.S Open four more times, including 1993, ’95, ’96 and 2002. He never won the French Open as the clay surfaces at Roland Garros were always considered his weakness. He played on Davis Cup-winning teams in 1992 and 1995 and won the ATP World Tour Finals five times. He also won two Grand Slam Cups.

Mr. Sampras had a career singles record of 762-222 [77.43%] and won 64 career singles titles. He spent 286 weeks as the number one ranked player in the world, second only to Federer on the all-time list, and retired just prior to the U.S. Open in 2003. Sampras and Ken Roswall are the only men to have won Grand Slam singles titles in their teens, 20s and 30s. He won $ 43,280,450 in official prize money, 14 Grand Slam singles titles and was inducted into the International Tennis Hall of Fame in 2007. He was named ATP Player of the Year six times and was crowned ITF World Champion six times.