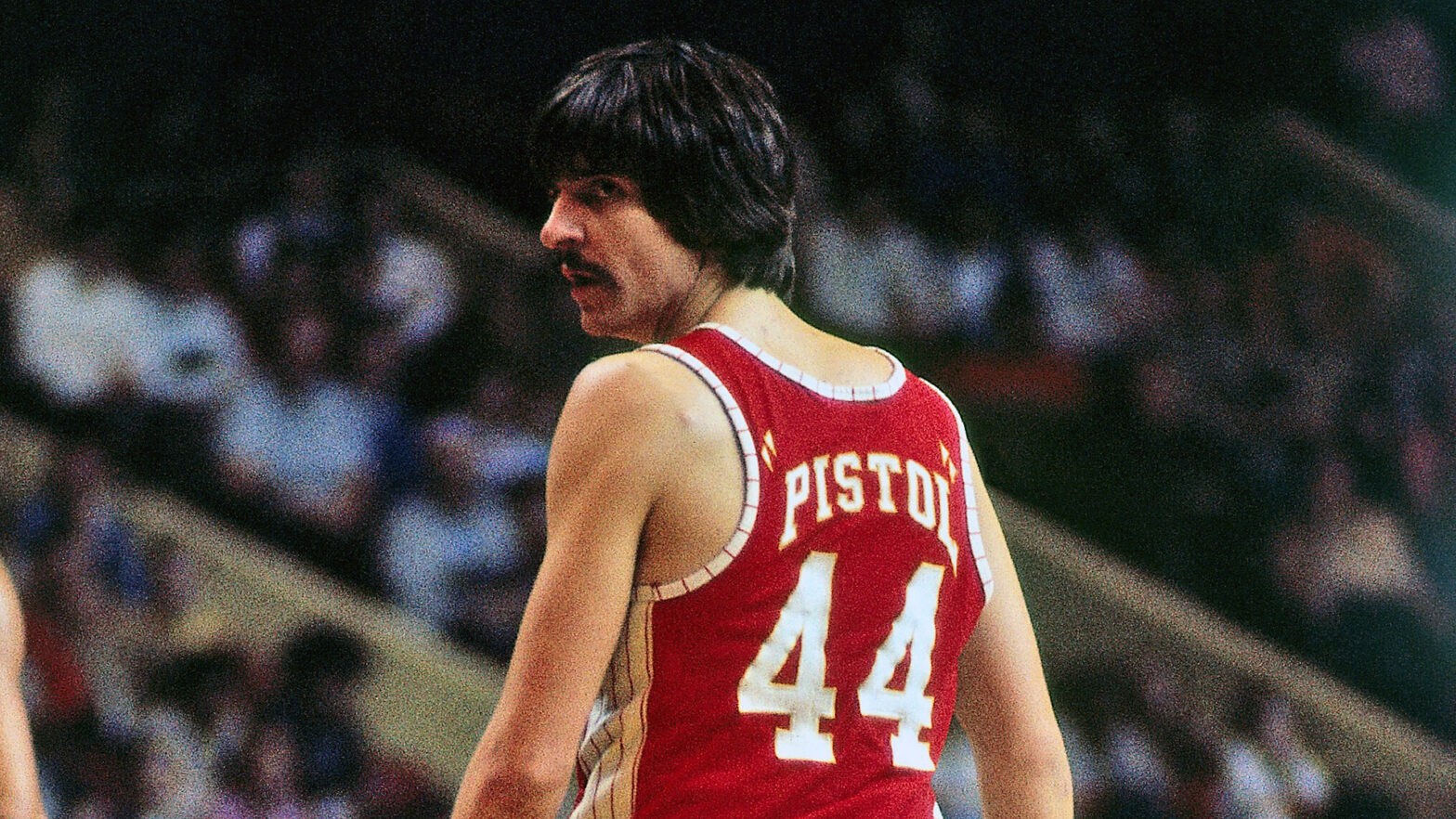 Born in Aliquippa, Pennsylvania—a steel town outside of Pittsburgh that produced NFL stars Mike Ditka, Tony Dorsett and Darrelle Revis—on Jun 22, 1947, Maravich was the second of three children. His father, Press, played guard for the Youngstown Bears of the National Basketball League in 1945-46 and Pittsburgh Ironmen of the Basketball Association of America in 1946-47 and taught his son the fundamentals of basketball when Pete was seven. Maravich spent four to five hours a day practicing; obsessively shooting, passing, dribbling and working on his game. When his playing days were over, Press Maravich went into coaching and, in 1956, accepted the head basketball job at Clemson University and the family moved to South Carolina. As an eighth-grader, Pete Maravich played for Daniel [Clemson, SC] High School’s varsity basketball team, whose star was his older brother Ronnie. In 1963, Press took an assistant coaching position at North Carolina State and Pete enrolled at Needham B. Broughton High School in Raleigh, regularly scoring over 40 points. When Press was promoted to head coach in 1964, he envisioned his 6’3”, 150 pound son playing for him at N.C. State, but Pete dreamed of following in the footsteps of his idol, Jerry West, and attending West Virginia University. As an Atlantic Coast Conference School, N.C. State required a minimum SAT score of 800 and Pete Maravich did not meet that standard upon graduation from Broughton in 1965. Press Maravich sent Pete to Edwards Military Institute in Salemburg, North Carolina, for a year in hopes of giving Pete time to gain weight while also improving his academics. Pete averaged 33 points per game, grew to 6’5” and 170 pounds, but never got his SAT score to 800, meaning he could not attend an ACC school.

Louisiana State University, which required no minimum SAT score for scholarship athletes, offered Press Maravich a $5,000 raise and an athletic scholarship for his son if he were to accept their vacant head coaching position. Press accepted but Pete balked, insisting on going to West Virginia. Press Maravich issued his son an ultimatum—either play for LSU or never come home again—and “Pistol” Pete Maravich arrived in Baton Rouge as the savior of basketball in the South. NCAA rules prohibited freshman from playing varsity sports at that time, so Maravich played on the freshman team, pouring in 50 points, 14 rebounds and 11 assists in his first game. He led the Tigers frosh team to a 17-1 record while the varsity went 3-23 under his father’s direction. Maravich joined the varsity team as a sophomore and instantly became a national sensation. He led the nation in scoring and was named first team All-America in each of his three years at LSU. Maravich set NCAA records for several “mosts,” including career points, single season points, field goals attempted and field goals made. He scored 3,667 points—still the most in NCAA history—and is ahead of Freeman Williams, who is second on the list, by over 400 points, and Williams played four seasons [106 games] while Maravich only played three [83 games]. Additionally, “Pistol” played before the advent of the three point line. He was a long range shooter who averaged 44.2 points per game. Former LSU assistant coach Dale Brown charted every shot Maravich scored and concluded that if three pointers were counted, his average would have been 57 points per game. Maravich was a three-time SEC Player of the Year and was twice named national player of the year. LSU played 31 games in “Pistol’s” senior year. He scored 50 or more points in ten of them, including a career-high 69 against Alabama.

The Atlanta Hawks selected Pete Maravich with the third overall pick in the 1970 NBA Draft and, following a bidding war with the ABA’s Carolina Cougars, signed him to a five year, $1.9 million contract, the richest in the history of pro basketball. Maravich played four seasons in Atlanta before being traded to the expansion New Orleans Jazz in 1974 for Dean Meminger, Bob Kauffman, two first-round and two second-round picks. In 1976-77, he led the league in scoring before knee problems forced him into retirement in 1980. Maravich was a five-time NBA All-Star and was voted as one of the 50 Greatest Players in NBA History. In 1987, he became the youngest player ever inducted into the Naismith Hall of Fame and was elected into college basketball’s Hall of Fame in 2006. One of the most indelible images in basketball history is that of “Pistol” Pete Maravich, wearing floppy socks and shaggy hair, flying down the floor and making a no-look pass, between-the-legs dribble or pulling up for a seemingly impossible jump shot. The great John Havlicek called Maravich the “best ball handler of all time.” Mr. Maravich died in 1988 of an undiagnosed congenital heart defect while playing pickup basketball. He was 40 years old.

On this date in 1969, Pete Maravich set an NCAA record by making 30 of 31 free throws in a game against Oregon State.