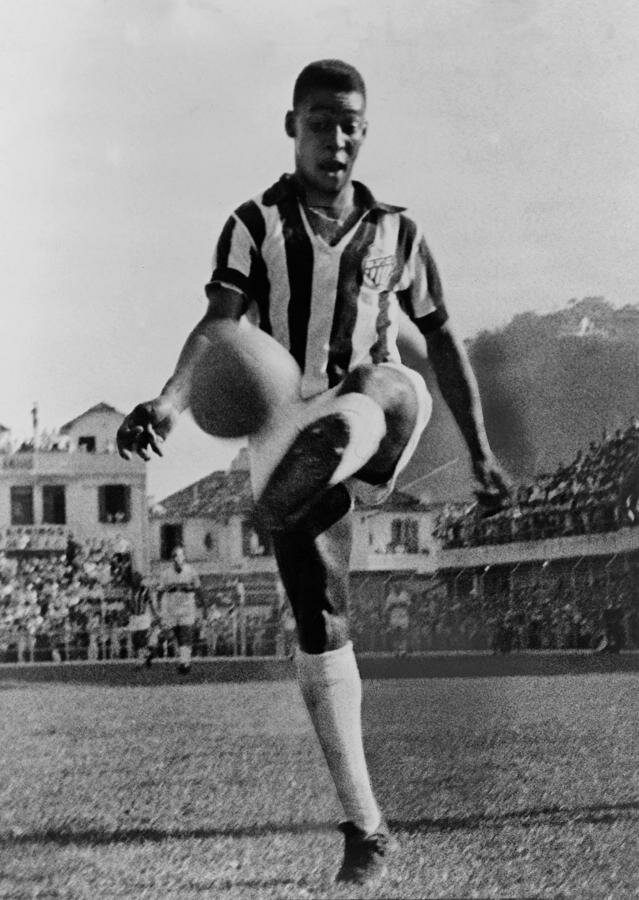 Pele is widely regarded as the greatest soccer player of all time. Edson Arantes do Nascimento was born October 23, 1940, in Tres Coracoes, a Brazilian town located about 225 miles south of Rio de Janiero.  The older of two children, he was named after American inventor Thomas Edison. He was called “Dico” by his family and was later nicknamed “Pele” when he mispronounced “Bile” [BEE-lay], his favorite player for the local soccer team.  He grew up in poverty in Bauru, a town in Sao Paulo, where his father taught him to play soccer.  At 14, Pele joined Bauru Athletic Club and led them to three straight Sao Paulo state youth championships.  In 1956, his coach took Pele to Santos, a port city near Sao Paulo, to try out for the professional club Santos FC.  After making the team and signing his first professional contract, he made his senior team debut at 15, scoring the first goal of his record-setting career in his first match.  A year later he earned a starting position and led the league in scoring.  Ten months after signing professionally, Pele was called up to the Brazil national team. In 1958, Pele scored 58 goals—still a record—while leading Santos to the Campeonato Paulista title.  In that year’s World Cup, he scored three goals [hat trick] against France in the semi-final and two goals in the final as Brazil beat Sweden 5-2.  His first goal was voted as one of the best in the history of the World Cup.  Following his second, Sweden player Sigvard Parling said, “When Pele scored, I have to be honest and say I felt like applauding.”  The 17-year-old Pele set several World Cup firsts, including youngest to score a goal, youngest to score a hat trick, and youngest to play in a World Cup final match.  In 1959, he was named “Best Player” in the South American Championship while leading Brazil to a second-place finish.  By 1962, Pele was rated as the best player in the world.  Despite Pele suffering an injury in that year’s World Cup, Brazil won the title.  Afterward, wealthy teams such as Real Madrid and Manchester United tried to sign him, but the Brazilian government declared Pele an “official national treasure” to prevent him from being transferred out of the country. Pele played for Santos for 19 years, touring internationally in order to take full advantage of his popularity.  His favorite goal was scored during a Campeonato Paulista match against rival Juventus in August 1959.  In March 1961, he scored the gol de placa [goal worthy of a plaque] against Fluminense at the Maracana Stadium in Rio.  Pele received the ball on the edge of his own penalty area, eluded opposing players with feints while running the length of the field, and struck one past the goalkeeper.  A plaque was later dedicated to “the most beautiful goal in the history of the Maracana.”  In 1967, the two factions fighting in the Nigerian Civil War agreed to a 48-hour ceasefire so they could watch Pele play an exhibition game in Lagos. He led Brazil to three World Cup titles; in 1958, 1962 and 1970.  In 1970, he won the Golden Ball as player of the tournament while leading what is often considered the greatest football team in history to the Jules Rimet Trophy.  Pele retired from the national team in 1971 after leading Brazil to a record of 67-14-11 during his career. After the 1974 season, Pele retired from Brazilian club football.  The following year, he joined the New York Cosmos of the North American Soccer League [NASL].  Though well past his prime, he raised the popularity of soccer in the United States.  Pele led the Cosmos to the 1977 NASL championship in his third and final season with the club.

Pele is the most successful goal scorer of all time.  He scored 541 league goals and 1,281 overall, including friendlies and tour games.  Pele played with a style and grace that led to futbol being called “The Beautiful Game.”  His penchant for electrifying play and penchant for spectacular goals made him an international star.  A global soccer icon, he was named one of the “100 Most Influential People of the 20th Century” by Time magazine in 1999 and is a national hero in Brazil.  “The Black Pearl” won three FIFA World Cups and was named, along with Johan Cryuff [Daily Dose, 6/27/16], to the World Cup Dream Team in 2002.  The most recognizable athlete in the world was also, for a time, the highest paid.  In 1999, he was voted “World Player of the Century” and “Athlete of the Century.”  Christiano Renaldo [Daily Dose, 10/23/15] said, “Pele is the greatest player in football history, and there will only be one Pele.”  Pele visited the White House in 1982, where America’s Commander in Chief said, “My name is Ronald Reagan, I’m President of the United States of America.  But you don’t need to introduce yourself, because everyone knows who Pele is.” On this date in 1977, Pele played in his final match in a game between the New York Cosmos and Santos FC.  “O Rei” [The King] played the first half with New York and the second with Santos.

The Daily Dose would like to know who you consider to be the greatest footballer of all time?