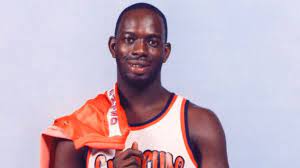 Dwayne Washington is the most important player in Syracuse University basketball history.

Dubbed the “Pearl” because his game resembled that of the great Earl “The Pearl” Monroe, Washington grew up in the Brownsville section of Brooklyn.  He excelled at Boys and Girls High School in Brooklyn, and was the nation’s most sought-after recruit in 1983.

When Washington, a point guard, committed to Syracuse, Jim Boeheim said the program was changed forever.  “I can’t underscore how big a moment that was for our program,” said the long-time coach of the Orange.  “I believe at that point we officially went from being an Eastern program to a national program.  Everybody knew who the Pearl was.  I’d get off a plane in L.A. and somebody would say, ‘There’s Pearl’s coach.’

“He was the guy who opened the door for us and enabled us to land recruits not just from the East coast or the Midwest, but from the entire country.”

The Pearl put on a show but was never a showboat.  The king of the crossover, Washington brought his playground style to Syracuse and helped forever change the Big East Conference.  Along with Chris Mullin and Patrick Ewing, Washington shepherded the Big East from infancy to adulthood.

They always lined up to see the Pearl.  He once dropped 82 in a high school game.  A six-foot, two-inch human highlight film, thousands would crowd around the courts at the King Towers high-rise apartments in Harlem to watch the Pearl play.  “He was electric, just electric,” marveled Boeheim.

With some 300 scholarship offers on the table, Pearl announced his college choice by telling Al McGuire during halftime of a nationally televised game between St. John’s and DePaul.  The reason he chose Syracuse was to play in the Carrier Dome, a 30,000-seat colossus that opened before the 1980-81 season.

While Yankee Stadium is the House That Ruth Built, the Carrier Dome is the place Pearl Washington filled.  Mullin and Ewing were better players, but the Pearl is who people came to watch.  A press-breaker and zone-buster, Washington was a one-man fast break.

Washington’s biggest moment came in January 1984.  In just his 15th game as an Orangeman, he made a running 45-foot buzzer beater to give Syracuse a 75-73 win over 16th-ranked Boston College.  Before 30,000 screaming fans in the Carrier Dome, Pearl ran off the floor — arms aloft – and straight into the tunnel leading to the locker room.

Unranked at the time, the Orangemen cracked the Top 20 the next week and remained there for the rest of Pearl’s Syracuse career.  A year after his game-winner against BC, Pearl knocked down a 15-footer as time expired to beat number-two Georgetown on ESPN’s Big Monday.

Quiet and unassuming off the court, Washington was a masterful showman on the floor.  A three-time All-American, Pearl was named Big East MVP in 1986.  One of the most legendary players in Syracuse history, Washington led the Orangemen in assists and steals in his three seasons with the school.

In his junior year, Pearl was named Most Outstanding Player of the 1986 Big East tournament.  Syracuse lost to St. John’s in the championship game.  It was the first time the award went to a player not from the winning team.

After guiding the Orangemen to a 71-24 record in his three seasons in upstate New York, Washington declared for the NBA draft.  The New Jersey Nets selected him with the 13th overall pick in 1986.  After two seasons in New Jersey, the Miami Heat picked Pearl with the 18th selection of the 1988 expansion draft.

He played 54 games for the Heat before being released, then played two seasons in the Continental Basketball Association.

In the summer of 2015, Washington was diagnosed with a malignant brain tumor.  He underwent surgery in August but succumbed to cancer in April 2016.  The Pearl was 52.

Despite playing in only 95 college games, Dwayne Alonzo Washington is SU’s fourth all-time assists leader.  He is sixth in steals.  While Washington was at Syracuse, tee shirts on campus read: “On the Eighth Day, God Created Pearl.”

On March 2, 1996, Syracuse University retired Washington’s number 31 uniform.  He is one of 14 players in school history to have received that honor.

Geno Auriemma
By The Numbers: Part II
The Wright Stuff