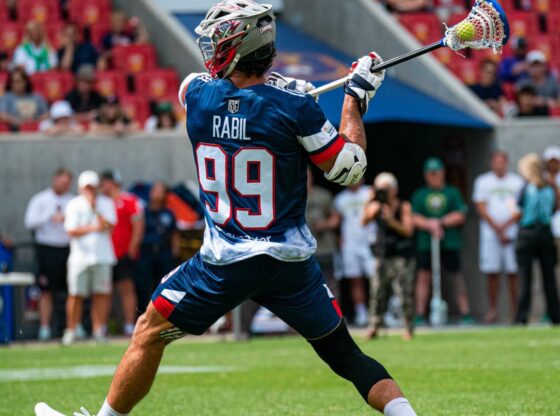 Paul Rabil is the face of American lacrosse.

A three-time First Team All-American at Johns Hopkins University, Rabil was the first pick of the 2008 Major Lacrosse League [MLL] draft.  That year, he made the first of ten consecutive MLL All-Star teams.  Rabil is the leading scorer in MLL history and was twice named league MVP.  A three-time Offensive Player of the Year, he earned First Team All-Pro honors nine straight times before retiring in 2017.

Born in Gaithersburg, Maryland, December 14, 1985, Paul is the second of Jean and Allan Rabil’s three children.  At 12, he was given a lacrosse stick by a neighbor.  Rabil improved quickly, and by 14 was a star.  He made varsity at Watkins Mill High School, then transferred to DeMatha Catholic prior to his sophomore year.  A prep powerhouse located 25 miles from Gaithersburg, DeMatha has sent dozens of players to the NFL, NBA and Major League Soccer.  Alumni include NFL Today host James Brown, basketball Hall of Famer Adrian Dantley and Olympic gold medal sprinter Derek Mills.

“After my freshman year I knew I was going to play Division I lacrosse and that I wanted to play at the highest level,” said Rabil.  “I wanted to be as prepared as I could.”

The 6’4” and 220-pound Rabil was a schoolboy standout, earning letters in basketball and track.  But he excelled most at lacrosse, where Rabil’s speed allowed him to create separation in the open field while his size and strength made him hard to defend near the goal.  Rabil was named High School All-America in 2003 and 2004.  As a senior, he was voted Maryland High School Player of the Year.  Rabil led DeMatha to three conference championships and scored 288 points in his high school career.  In his final two seasons, the rugged right-hander tallied 80 goals and 73 assists for the Stags.

According to Rabil, “Character is what you do when no one is watching.”

Despite being diagnosed with Auditory Processing Disorder, an affliction that makes reading comprehension difficult, Rabil earned a scholarship to Johns Hopkins, one of the world’s top academic universities and a perennial lacrosse powerhouse.  He earned a starting spot as a freshman, scoring four goals to fuel a stunning 12-11 come-from-behind win at Syracuse.  After tallying two goals against Duke to seal the 2005 national championship, Rabil was named Third Team All-American.

Paul Rabil is the best midfielder in Johns Hopkins history.  He led the Blue Jays in scoring in each of his final three seasons.  As a junior, Rabil earned the McLaughlin Award as the nation’s top midfielder.  The following year, he was one of five finalists for the Tewaarton Award, the lacrosse equivalent of the Heisman Trophy.  Rabil led Johns Hopkins to the NCAA championship game in three of his four years in Baltimore, helping the Jays to national titles in 2005 and 2007 [he scored six goals in a losing effort to Syracuse in the 2008 final].  A political science major, Rabil  finished as Johns Hopkins’ all-time leader in goals, assists and points in NCAA tournament games.

Founded in 2001, Major League Lacrosse is the top outdoor professional league in America.  The nine-team league plays June through September.  Meanwhile, the National Lacrosse League [NLL] is North America’s top indoor circuit.  The NLL has twelve teams [eight in the U.S. and four in Canada] and plays box lacrosse in winter and spring.  In 2008, Paul Rabil was the first overall pick of the MLL draft and second overall pick in the NLL.

“You can never spend too much time on the wall,” said Rabil.  “Never.”

Rabil was America’s lacrosse superstar.  Number 99 played ten MLL seasons: seven with the Boston Cannons and three with the New York Lizards.  Rabil played in the MLL All-Star Game every year he was in the league.  Perhaps the most talented lacrosse player of all time, Rabil set the world record for the fastest shot ever recorded when he fired a 111-mph rocket at the 2009 MLL Fastest Shot competition.  Two years later, he won the MLL Skills competition at the 2011 All-Star Game.

In 2011, Rabil led Boston to its first Steinfeld Cup as MLL champions.  After being traded to New York in 2015, he guided the Lizards to the league title.  In the 2015 final, Rabil had three goals and three assists and was named Steinfeld Cup MVP.

A fixture on the U.S. National team since 2009, Rabil has helped Team USA capture two golds and a silver at the ILF World Championships.  In 2010, he scored 16 goals with seven assists – including a hat trick to beat Canada in the championship game — to earn tournament MVP honors.  Rabil was named to the All-Tournament Team in each of the three ILF World Championships in which he competed.

Paul Rabil stepped away from the NLL following the 2013 season, as the scheduling overlap between the two pro leagues was too restrictive.  In January 2014, he married Kelly Berger, a former All-American midfielder for James Madison University and member of the 2017 U.S. Women’s National Team.

The social media-savvy former midfielder has more than 100,000 subscribers to his YouTube channel.  Rabil has 76,000 Twitter followers, plus a growing podcast entitled Suiting Up.  In 2018, Paul and his brother, Mike, announced the formation of the Premier Lacrosse League – a direct competitor to the MLL.  Launching this summer, the six-team circuit will play a 14-week tour-based schedule taking place in a dozen major market cities.  The PLL intends to feature the game’s best players competing at state-of-the-art venues.  The PLL will operate from June through September, avoiding overlap with the NLL and NCAA seasons.  Games will be played on weekends only, and the PLL has a media rights partnership with NBC.