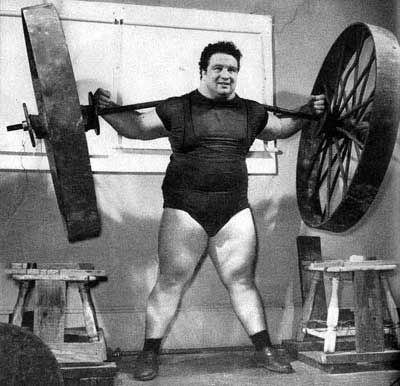 Paul Edward Anderson is the strongest man who ever lived.

Born in Toccoa, Georgia—90 miles northeast of Atlanta and hometown of singer James Brown—on this date in 1932, young Paul was the only son of Ethel Bennett and Robert Anderson.  In order to gain size and strength for football, he started weight training in his family’s back yard using homemade weights his father had poured out of concrete.  By 15, Anderson weighed 200 pounds.  As a senior running back for Toccoa High School, he had put 250 pounds on his 5’9” frame and earned a scholarship to Furman University in Greenville, South Carolina.  Anderson played one year for the Paladins before moving to Elizabethton, Tennessee, with his parents and older sister in 1951.  There, he met Bob Peoples, who competed in powerlifting competitions and taught Anderson the virtues of squat training and proper nutrition.  Peoples also introduced him to other lifters in the area and he began competing in area weightlifting competitions.  Anderson had an insatiable appetite for training but lacked sophisticated equipment, lifting old car axles, 50 gallon drums filled with concrete, and huge iron wheels in lieu of traditional barbells.

In 1955, Anderson won the USA National AAU Weightlifting Championship in the superheavyweight division.  Afterward, he traveled to an international competition in the Soviet Union, where weightlifting was a popular sport.  At the height of the Cold War, Anderson faced the Soviet champion, Alexey Medvedev, in the final of the overhead two-hand press.  After the Russian matched the Olympic record with a 330.5 pound press, Anderson hoisted an unheard-of 402.5 pounds over his head, astonishing the crowd in a show of American strength.  During the World Championships in Munich later that year, Anderson easily won his weight class after pressing 408 pounds and clearing a total weight of 1,130 pounds to take the gold medal.

After successfully defending his title at the 1956 AAU nationals, Anderson earned a spot on the U.S. Olympic team.  The 1956 Summer Games were held in Melbourne, Australia, in late November.  Anderson entered the final of the superheavyweight class suffering from a 104 degree fever and found himself in a long, tough duel with Argentina’s Humberto Selvetti.  The two athletes matched each other in every lift, resulting in a tie but, because Anderson was 12 pounds lighter [304 pounds verus 316] than Selvitti,  he was awarded the gold medal.

Mr. Anderson became one of the best known athletes of the time and his fame spread around the world.  He held world records in four events–more than any man in history—and performed exhibitions in Iran, Iraq, Lebanon and Egypt.  A devout Christian, he married Glenda Garland and they founded the Paul Anderson Youth Home for troubled children in Vidalia, Georgia.  Anderson helped build and support the home by conducting speaking engagements and strength exhibitions, averaging over 500 per year.  He became famous for stunts such as driving a nail through a board with his bare fist, lifting a car, and using his back to raise a table loaded with eight men.  Anderson was ruled ineligible for the 1960 Olympics for accepting money for some of his exhibitions.  In his absence, the gold medal from the Rome Games went to Soviet heavyweight Yury Vlasov, who bettered the records Anderson set in Melbourne in 1956.  Not to be outdone by the Russian and wanting to maintain his reputation as the world’s strongest man, Anderson arranged an exhibition.  Using the same amount of weight Vlasov lifted to win his gold medal.  Anderson hoisted the barbell three times in quick succession.  The extraordinary performance solidified his position as the most dominant lifter in the world and cemented his legacy as the strongest of the strong.

Paul Anderson played a big part in the growth of powerlifting as a competitive sport.  Weighing between 275 and 350 pounds while competing, he performed unequaled feats of strength.  Sporting a 58 inch chest, 22-inch biceps, and a 22 ½ inch neck, Anderson once jerk-pressed 565 pounds, a lift that has never been duplicated.  He bench-pressed 628 pounds, deadlifted 820, and regularly squatted 900 pounds for ten reps.  “I could do 310 pounds in a standing one-arm side press with a dumbbell,” said Chuck Ahrens, a strongman of the 1950s.  “Paul could press it with one arm ten times.”  His workouts were                   legendary:  full squat sets consisted of 20 reps with 600 pounds, followed by two reps each of 825, 845 and 900 pounds.  He would then half-squat 1.200 pounds and quarter-squat 1,800.  And he did this three times each week.  Anderson is the last American to win an Olympic gold medal in the superheavyweight division.  In 1985, the Guinness Book of World Records acknowledged him with a back-lift of 6,270 pounds, earning him the nickname, “World’s Strongest Man.”  Mr. Anderson set 18 American records and eight world records in powerlifting.  He suffered from chronic nephritis, a kidney disease, his entire life.  In 1983, Dorothy Anderson donated one of her kidneys to her younger brother, enabling him to live another 11 years.  The strongest man who ever lived died August 15, 1994.

The Paul Anderson Youth Home is still in existence.  In July 1996, Glenda Anderson carried the Olympic torch during its journey to Atlanta for the Summer Olympics.