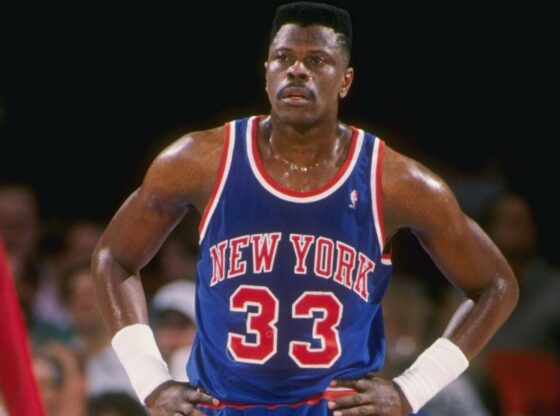 Patrick Aloysius Ewing, Sr. was born in Kingston, Jamaican on this date in 1962.  He excelled at cricket and soccer and moved to Cambridge, Massachusetts in 1975 at the age of 12 to join his mother and four of his siblings who had immigrated before him.  He learned to play basketball at Cambridge Rindge and Latin High School and, at 7 feet tall, was highly recruited by colleges throughout the country.  He was close to signing a letter of intent to play for North Carolina and their legendary coach, Dean Smith, but was put off after witnessing a rally for the KKK during his visit to Chapel Hill and decided not to attend.  Fans in Boston wanted him to sign with Boston College or Boston University but Ewing decided to accept a scholarship to Georgetown University to play for John Thompson.  His impact was felt immediately, as he starred as a freshman in 1981-82 and led the Hoyas to the NCAA final against North Carolina and fellow frosh, Michael Jordan.  Georgetown lost on Jordan’s game winning shot  but returned and won the title over University of Houston two years later, with Ewing being named Final Four Most Outstanding Player.  In his senior year of 1985, Georgetown made the NCAA championship game for the third time in four years but lost to Villanova, 66-64, in one of the biggest upsets in college basketball history.  Patrick Ewing was a three time All-American, 1985 National Player of the Year and two-time Big East Player of the Year during his four years at Georgetown.  He was named AP, Sporting News, NABC and Naismith Player of the Year as a senior; there would be no doubt as to who would be the first player selected in the 1985 NBA Draft.

As expected, Ewing was selected by the New York Knicks with the first pick of the ’85 draft and was named NBA Rookie of the Year and quickly became one of the premier centers in the league.  He became a force at both ends of the floor and turned the Knicks into a perennial winner, making the playoffs in 13 consecutive seasons, including three appearances in the Eastern Conference Finals. They won two of those, advancing to the NBA Finals in 1994 and 1999 but came up short both times, losing to the Houston Rockets and the San Antonio Spurs, respectively.  Mr. Ewing left the Knicks in a trade with the Seattle Supersonics in 2000.  After a year with the Sonics and another with the Orlando Magic, he announced his retirement on September 18, 2002.

In 2008, ESPN ranked Patrick Ewing as the 16th greatest college basketball player of all time.  He won Olympic gold medals as a member of the 1984  and 1992 U.S. men’s Olympic basketball team and was selected as one of the “50 Greatest Players in NBA History” in a 1996 poll.  He is the New York Knicks all-time leading scorer and the team retired his #33 in 2003.  He was inducted into the Naismith Basketball Hall of Fame as a player in 2008 and as a member of the ’92 Olympic team in 2010.  Ewing was an 11-time NBA All-Star and in 1999 became the 10th player in NBA history to record 22,000 points and 10,000 rebounds.  His biggest contribution to basketball, however, may be bringing the wearing of a tee shirt under a basketball jersey into vogue, something he did while playing for Georgetown.