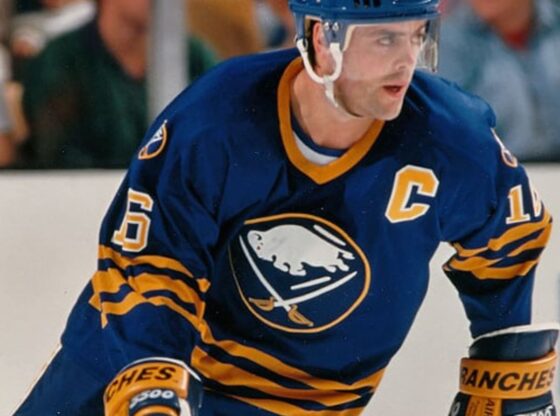 In his fifteen seasons in the National Hockey League, Patrick Michael LaFontaine played for three different teams in three separate cities.  Not once did he have to change license plates.

Born in St. Louis, Missouri, on February 22, 1965, his father was an executive with Chrysler and moved the family to the Detroit area in 1972.  LaFontaine attended Charles F. Kettering High School in Waterford, Michigan—alma mater of baseball player Kirk Gibson, who was eight years older.  At 16, he played for Detroit Compuware in the North American Hockey League, one of the top junior leagues in the United States.  Unlike most American-born players, LaFontaine passed on college hockey, declining scholarship offers from Michigan [Daily Dose, April 13] and Michigan State in order to play in the Quebec Major Junior Hockey League [QMJHL].  In 1982-83, LaFontaine began his career with the Verdun Juniors, where he enjoyed one of the most decorated seasons in QMJHL history.  The right-handed center scored 104 goals and had 130 assists, outdueling Mario Lemieux [Daily Dose, October 5] to win the Jean Beliveau Trophy as the league’s top scorer.  LaFontaine broke many records, including Guy Lafleur’s [Daily Dose, November 26] 40-game point-scoring streak and most goals by a rookie [70], formerly held by Mike Bossy.  The 18-year-old LaFontaine led Verdun to the Memorial Cup playoffs, where he was awarded playoff MVP despite losing in the semi-finals.  He was also named MVP of the regular season, Offensive Rookie of the Year, Best Professional Prospect and Most Sportsmanlike Player.  Not surprisingly, Pat LaFontaine was chosen 1982-83 Canadian Major Junior Player of the Year.

In June 1983, the Detroit Red Wings held the fourth pick in the NHL Entry Draft and coveted hometown hero Pat LaFontaine.  The New York Islanders liked him as well, taking LaFontaine with the third overall pick to make him the second American-born player [after Bobby Carpenter in 1981] to be selected in the first round.  It was an epic draft, with three future Hall of Famers going in the first round, including Steve Yzerman [Daily Dose, October 22], who Detroit “settled” for in the fourth spot, and future Boston Bruins legend Cam Neely.  After leading Team USA in scoring at the 1984 Winter Olympics, LaFontaine joined the Islanders in time for the Stanley Cup Finals.  It was a year that marked the passing of the torch in the NHL, as the aging Islanders lost to the Edmonton Oilers, ending New York’s run of four straight Stanley Cups, while Edmonton went on to win five of the next seven championships.   In the 1987 Patrick Division semifinals, LaFontaine scored the game-winning goal in the fourth overtime of game seven—the “Easter Epic”—to eliminate the Washington Capitals.  Three years later, in what would prove to be his final season on Long Island, he scored 50 goals for the one and only time in his career.  Following a contract dispute, the Islanders sent LaFontaine to Buffalo before the 1991-92 season.  The Sabres elected him captain, and the center responded with the best season of his career, recording 148 points.  Injuries plagued Mr. LaFontaine in Buffalo, as he missed significant time due to a broken jaw, knee injuries and concussions.  He continued to battle, earning the Bill Masterson Trophy in 1995 for perseverance, sportsmanship and dedication to hockey.  In 1997, LaFontaine was shipped downstate—to Manhattan, where he skated for the New York Rangers.  On March 16, 1998, LaFontaine collided with teammate Mike Keane, suffering what he estimates was the tenth concussion of his career.  After sitting out the remainder of the 1998 season and all of the next, he retired rather than risk further injury.

Patrick Michael LaFontaine is one of the best American-born hockey players ever to lace up a pair of skates.  He was one of the game’s best play-making forwards in the 1980s and early 90s and is one of the sports’ classiest people.  His father recalled a postgame scene at Nassau Coliseum in Pat’s early years.  “I waited for him like I always did, and when he finally came out of the dressing room, I was ready to get home.  But he said, ‘Dad, I have to greet the fans who have waited for me.  They pay my salary.’  That’s the way Pat always was.  He knew he was blessed and that it was important to thank people along the way.”  Pat LaFontaine went from Verdun to the Olympics to the NHL in one year.  He scored 40 or more goals in six straight seasons, amassed over 1,000 career points and played in five NHL All-Star Games.  He was a sensation from the time he arrived on Long Island, recalling, “I was 15 when Bobby Nystrom scored the overtime [Stanley Cup Finals] game winner in 1980, so to be playing with those guys four years later was incredible.”  LaFontaine led Team USA to the 1996 World Cup of Hockey title and played on two U.S. Olympic teams.  He was named NHL Performer of the Year in 1990, earned the USA Hockey Distinguished Achievement Award in 1993 and was elected to the Hockey Hall of Fame and United States Hockey Hall of Fame in 2003.

In 1997, Mr. LaFontaine founded the Companions in Courage Foundation, a charitable organization dedicated to building interactive playrooms in children’s hospitals throughout North America.  These playrooms use innovative communications tools that help extremely ill children replace the isolation of a hospital with a connection to family, friends and celebrities during their hospital stay.

On this date in 1987, Pat LaFontaine fired a slap shot from the blue line that Washington Capitals goaltender Bob Mason never saw to win game 7 of the Patrick Division semifinals, 3-2.  The game began at 7:30 Saturday night, April 18, but did not end until the early hours of Easter Sunday, earning it the nickname “Easter Epic.”  The winning goal came at 8:47 of the fourth overtime and remains the longest game in Islanders history.