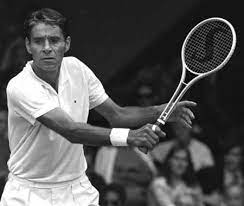 Pancho Gonzalez is the best tennis player to have never won Wimbledon.

Possessing speed, agility and grace, Pancho may have been the best of them all.  Largely self-taught, he moved like a jungle cat and his strokes were poetry.  Before Althea Gibson and Arthur Ashe, the son of Mexican immigrants smashed through tennis’ class and ethnic barriers.  Athletic and aggressive, Gonzalez’ game was beautiful to watch.  He hated to lose.  Moody, volatile and contentious, Gonzalez snarled at opponents and sometimes drilled balls at line judges.  He often went into fits of rage, and once rushed into the seats after a heckler.  At 6’3” and 187 pounds, Gonzalez paralyzed opponents with the most overpowering serve the game had ever seen.  With all-consuming bitterness, he verbally abused officials and dominated tennis as a pro in the 1950s and 60s.  Handsome and flamboyant, Gonzalez ushered in a new era of tennis.  He brought about “The beginning of professional tennis as we know it,” explained Ion Tiriac, a former player and manager of Boris Becker.  “The father of everything we have today.”

Born in Los Angeles on this date in 1928, Ricardo Alonso was one of seven children born to Manuel and Carmen Gonzalez.  At 12, Carmen Gonzalez bought her son a tennis racket for 50 cents and Pancho taught himself to play on the public courts of Exposition Park.  He quit high school after two years to play tennis full time, but was banned from Junior tournaments because he was a drop-out.  Busted for burglary at 15, Gonzalez spent a year in detention, then joined the Navy and swabbed decks in the Pacific.  One AWOL and a couple of late returns from leave earned him a bad-conduct discharge in 1947.

Gonzalez entered the 1948 U.S. National Championships [now U.S. Open] ranked 17th in the country and, to everyone’s shock, won.  Just 20, the happy-go-lucky youngster finished the year as the number one-ranked American player.  Gonzalez returned to Forest Hills the following year and, to the surprise of many, successfully defended his U.S. Championships title.  Between 1948 and 1949, he also won two U.S. Clay Court singles titles, a U.S. Indoor singles championship, and a U.S. Indoor Mixed Doubles title.  With six major amateur championship trophies on his mantle – and against the advice of his friends — Gonzalez turned pro in 1949.

Lacking maturity and discipline, the 21-year-old Gonzalez was badly beaten in his first year on the professional tour.  The reigning king of pro tennis, Jack Kramer, won 96 of the 123 matches they played together, and the once friendly, good-natured youngster became a bitter loner.  Losing changed him.  “He was always the unhappiest man in town,” observed 1949 Wimbledon champion Ted Schroeder.  Following a brief hiatus that included him owning and running the tennis shop at Exposition Park, Gonzalez returned to top form.  By 1954, he was the best player in the world and dominated the men’s game for the next eight years.  “From 1954 to 1962, he was the best player that walked on the court,” said Kramer.

Most of Gonzalez’ career took place before the start of the Open Era in 1968.  Prior to that, professionals were ineligible to compete in Grand Slam events.  Like Rod Laver, Gonzalez undoubtedly would have won several more major titles had he been eligible to compete between 1949 and 1968, at which time he was 40.  Competing against Laver, Ken Roswall, Lew Hoad, Kramer and the other top professionals of his day, Gonzalez won 12 Pro Slam singles titles and was runner-up six times.

In June 1969, two months past his 41st birthday and a grandfather in the twilight of his career, Gonzalez outlasted 25-year-old Charlie Pasarell in the longest match in Wimbledon history.  In a contest that led to the advent of tie break scoring, Gonzalez and the young Puerto Rican played 112 games over two days.  In one of the greatest matches ever played, Gonzalez walked off the court a winner following a five hour-plus epic.  Gonzalez advanced to the fourth round of the championship, where he was beaten by Arthur Ashe.  It was the closest Gonzalez – who finished the season ranked sixth in the world – would ever come to winning a Wimbledon singles title.

Pancho Gonzalez must be included in any discussion of “best tennis player of all time.”  His serve fell as straight and deadly and an executioner’s blade and he was as competitive as any athlete in history.  Long-time tennis commentator Bud Collins remarked in 2006, “If I had to choose someone to play for my life, it would be Pancho Gonzalez.”  In 1999, Sports Illustrated wrote, “If Earth was on the line in a tennis match, the man you would want serving to save humankind would be Ricardo Alonso Gonzalez.”  Gonzalez was one of the few who played better tennis when angry.  He once stormed into a locker room and smashed his second-place trophy against the wall.  “He gets meaner every time I play him,” said Laver.  “I was one of his friends,” said 1959 Wimbledon champion Alex Almedo, “and when I beat him, he wouldn’t talk to me for three months.”

A friend once joked that the nicest thing Pancho Gonzalez said to any of his wives was “Shut up.”  His mood swings cost him six marriages and alienated him from all but the last of his eight children.  Madelyn Gonzalez married Pancho in 1960.  The couple divorced in 1968, remarried two years later, divorced again in 1975, and nearly remarried in 1978.  “He was such a complex person,” said Madelyn.  “He really wanted to be a good guy, but he just couldn’t.  It wasn’t in him.”  Andre Agassi’s older sister, Rita, was a young tennis prodigy who took lessons from Gonzalez, a man 32 years her senior, in the 1970s.  A romance developed and the two married in March 1984 – he for the sixth time, she for the first.  The couple later divorced, but remained close.

Ricardo Alonso Gonzalez died of stomach cancer in a Las Vegas hospital in July 1995.  Broke and nearly friendless, his funeral was paid for by Andre Agassi.