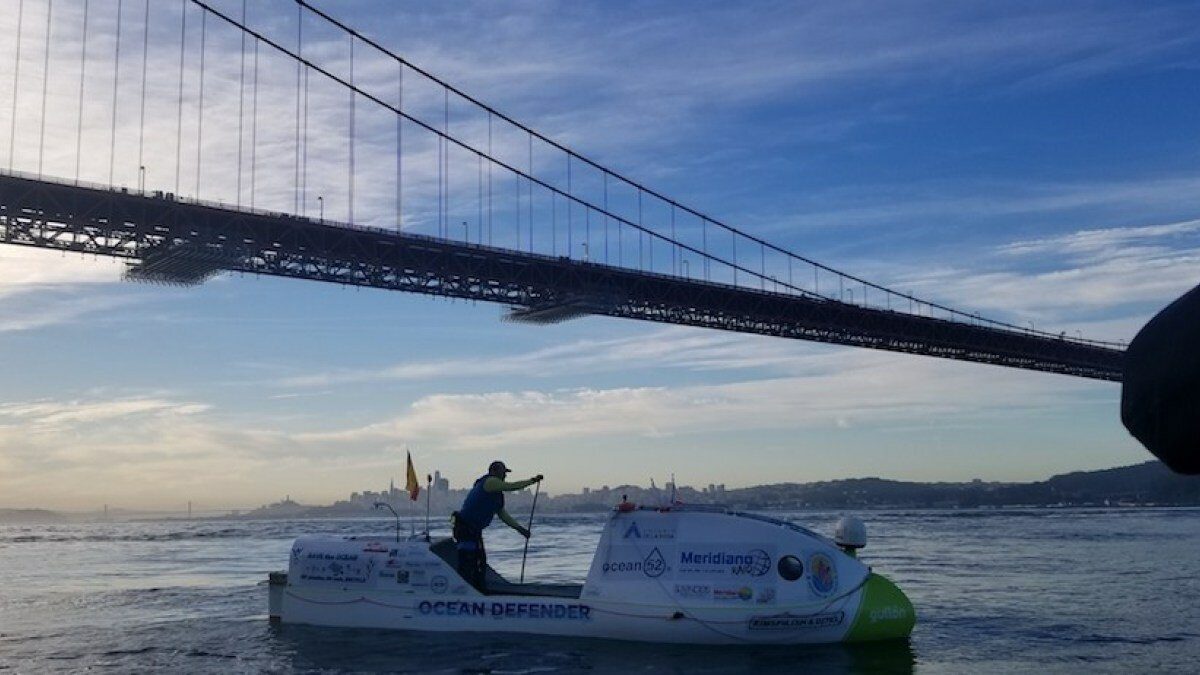 Antonio de la Rosa is the first person to paddle from California to Hawaii — standing. A Spanish adventurer from Madrid, de la Rosa paddled the Pacific in a stand-up paddle board [SUP] this past summer.  On June 9, 2019, he launched from a kayak shop in Sausalito – a charming village along the San Francisco Bay about three miles from the Golden Gate Bridge.  Seventy-six days, five hours and 22 minutes later, he stepped onto the dock of the Waikiki Yacht Club on the island of Oahu.  De la Rosa paddled 2,951 miles — solo and completely unsupported.  Along the way, the 50-year-old thrill-seeker survived storms and battled “absolute loneliness and self-sufficiency.”

Not once did he consider giving up.  A man of strong mind and unbreakable faith, de la Rosa’s positivity is infectious.

Antonio de la Rosa celebrated his 50th birthday at sea, treating himself to one small cookie.

The Pacific SUP Challenge cost $100,000 and took two years to plan.  It was an extraordinary journey.  The early part of the voyage saw Antonio get pushed south toward Mexico as ocean currents and strong winds tried to derail his quest.  Powered only by his own arms and legs, the Spaniard fought his way back on track and soon was heading straight toward Hawaii. De la Rosa’s goal was to raise awareness of man-made pollution in the ocean. Paddling the Ocean Defender, a specially-designed SUP painted with SAVE the OCEAN, NO plastics, and NO nets: RECYCLE along its side, he saw plastic at every turn.  “I kept seeing every day some plastic packaging and remains of fishing nets,” said de la Rosa.  “There is no day that I do not locate some plastic floating.”  And that was for 76 straight days. Born in Valladolid, Spain, July 24, 1969, de la Rosa became a Madrid firefighter at 18.  He soon discovered Quadrathlon, an endurance event that combines canoeing with swimming, cycling and running — and was hooked. Adventuresome, and with a love of sports and nature, de la Rosa and his sister own and operate an adventure tourism business and small hotel for athletes in Madrid.  In 2014, the fearless Spaniard won a 4,700-mile transatlantic rowing race despite never having rowed the ocean before.

I saw the curvature of the world.  Every year I think, ‘Okay. What do I do next year?’  I love this kind of life.

Not new to extreme endurance water sports, de la Rosa once circled the Iberian Peninsula while stand-up paddling — his favorite sport.  After rowing the Atlantic Ocean in 2014, he became determined to conquer the Pacific. Humble, funny and larger-than-life, Antonio de la Rosa is the first Spaniard to complete the Iditarod in Alaska.  He has circumvented the Arctic Circle in an inflatable SUP, covering more than 450 miles in 26 days.  Antonio has canoed across all eight Canary Islands and spent three weeks paddling the rivers across Spain and Portugal.  A man of boundless joy and endless vigor, he completed an Arctic 620-mile cross-country ski challenge in 2017. De la Rosa departed from San Francisco in early June in his custom-designed vessel.  Built in Spain by Kundaka, a SUP manufacturer, the 24-foot craft weighed 1,543 pounds fully loaded.  De la Rosa wanted a board he could not only live on for three months but also paddle from either side without adjusting his stance.  Gear and provisions filled the sealed tail compartment while sleeping quarters and electronic systems occupied a cabin in the nose.  The design produced a fat bow and stern but a relatively narrow standing area midship, resulting in a monstrous board that resembled a peanut. There were no engines on the Ocean Defender.  Solar panels kept the GPS, satellite phone and router charged, while a single, central 65-pound “fin” kept the craft stabilized and on course.  De la Rosa packed three months’ worth of food, a desalination system for drinking water, and other necessities.

While de la Rosa has a girlfriend back home and no children, he lovingly refers to his custom super-craft as his “nino.”

On a good weather day, de la Rosa paddled 40 or 50 miles.  If the current against him was strong, he maybe covered only ten.  He ate dehydrated food using heated water and sometimes fished.  The rugged rigger woke up hourly to check his gear, losing 25 pounds over the course of his 4,750 km journey. He struggled with sunburn, wind, and had to clear barnacles off the hull of his board three times during the trip.  The hardest part was the last day, when strong winds between the islands of Molokai and Oahu pushed de la Rosa dangerously close to the rocky coast.  “The last 24 hours were of concern and uncertainty,” he said. During his extraordinary journey, de la Rosa posted daily updates on Facebook and Instagram, including videos he shot on a GoPro camera.  Keeping in good spirits the entire crossing, the remarkable endurance athlete shared the daily grind of being alone at sea for almost three months straight. After becoming the first person to cross the Pacific on a stand-up paddle board, Antonio de la Rosa arrived in Oahu on August 24, exhausted and sporting a full grizzly beard.  It was 8:00 a.m. Saturday morning.  So, naturally, the first thing the brave Spaniard did upon entering the Waikiki Yacht Club was order a cold beer.