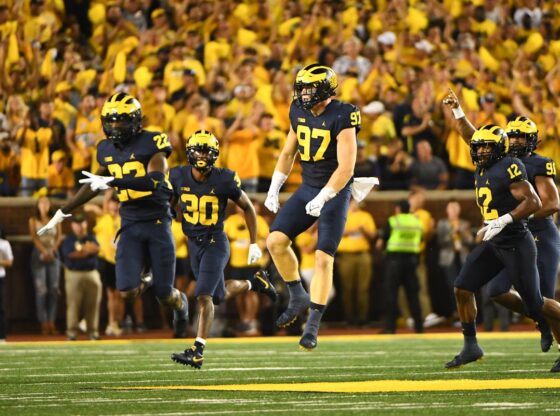 Overrated is defined as “having a higher opinion of [someone or something] than is deserved.”  Synonyms include overestimate, attach too much importance to, or praise too highly.

Here are ten of the most overrated things in the world of sports.

Michigan Wolverines football.  The school with the most wins in college football history is also the most overrated.  The last outright national championship the Wolverines won was in 1948.  While the Associated Press ranked Michigan number one at the end of the 1997 season, USA Today/ESPN saw things differently, awarding the national title to Nebraska.  How bad have things gotten in Ann Arbor?  The Wolverines have lost 13 of their last 14 games against Ohio State, and have only beaten Michigan State twice in the past decade.  Hardly worthy of calling themselves Victors.

Despite retiring with a record of 50-0, Floyd Mayweather is the most overhyped fighter in boxing history.  He ducked Manny Pacquiao [who, in his prime, would have crushed Pretty Boy handily] for a decade.  Of Mayweather’s 50 professional wins, only a dozen came against former or current lineal champions, while a mere two were over Hall of Famers.

Beginning in the mid-1980s, players began dumping a cooler full of Gatorade on their head coach following a big win.  The Chicago Bears drenched Mike Ditka upon clinching the NFC Central in 1984.  Two years later, the New York Giants doused Bill Parcells after winning the Super Bowl.  Unlike The Wave – which died a merciful death around the turn of the century – the tired Gatorade bath tradition continues.

Through the end of 2017, Joe Madden had won only 151 more games than he had lost as a big league manager.  In nine years in Tampa, he guided the Rays to one pennant.  Madden has taken the Chicago Cubs to one World Series.  Commonly dubbed a genius by the baseball press, Madden unnecessarily pitched Aroldis Chapman in Game 6 and nearly cost the Cubs the 2016 Fall Classic.  Solid manager?  Sure.  Genius?  Most definitely not.

The PGA Championship is golf’s fourth major – and a distant fourth at that.  Lacking the history of the Open Championship, traditions of the Masters, or prestige of the U.S. Open, the PGA is a bore.  Fact is, it isn’t really even golf’s fourth most important tournament.  That distinction belongs to the Player’s Championship.

Long, drawn-out, and having absolutely nothing to do with the game, the Super Bowl Halftime Show is completely overblown.  The NFL and media begin hyping the show months before the big game, trying to create a mega-event.  It never is, and has come to represent excess at its worst.

The Dallas Cowboys labeled themselves as America’s Team —  the people of the United States certainly didn’t.  It is hard to figure how the Cowboys have become the NFL’s most valuable franchise having not played in a Super Bowl in 22 years [and counting].  Overrated team, overrated popularity, overrated owner, and overvalued franchise.

One of actor Bill Murray’s lines in the 1981 comedy Stripes was, “It’s a little cute.”  Unfortunately for golf fans, Murray’s act at the AT&T Pebble Beach Pro-Am is no longer cute.  Since the early 1990s, the actor who played Carl Spackler has relied upon a shtick that has worn thin.  It’s time for Bill to go away.

Realizing its annual All-Star Game was becoming a snooze fest, Major League Baseball introduced the Home Run Derby in 1985.  Early versions of the Derby were entertaining, reminding older fans of the 1960 television show of the same name.  When Chris Berman began hosting the event for ESPN in 1993, the Home Run Derby became a bombastic nightmare.  And it has never recovered.

Sparkly tights, faux tans, and lots of makeup.  Sound like a Las Vegas chorus line?  How about WrestleMania: the WWE’s flagship event?  First held in Madison Square Garden in 1985, WrestleMania 34 took place in New Orleans April 8, 2018.  The event draws record crowds, is entirely fake, and involves grown men screaming at one another.  Only in America, right?

14 Most Memorable Monikers in Sports History
What the Hec?
John and Jobe