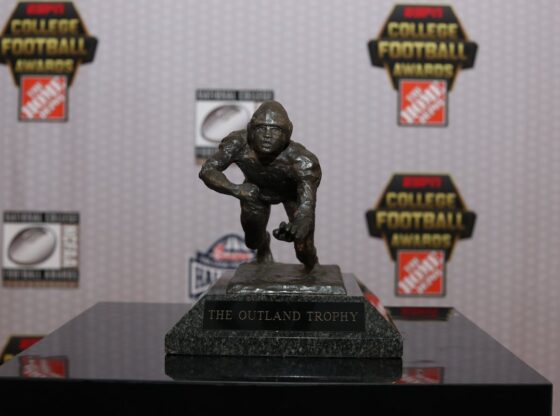 The Outland Trophy is awarded annually to the nation’s best interior lineman on offense or defense.

There is an old adage that says football games are won and lost in the trenches.  Nothing is more true.  Linemen – the guys that legendary broadcaster Keith Jackson referred to as the Big Uglies – are the backbone of a football team.   The group that controls the line of scrimmage – on both sides of the ball – wins the contest.

The Outland trophy is awarded by the Football Writers Association of America, which consists of men and women across America who cover college football for a living.  The 1,300-member FWAA is comprised of journalists, broadcasters, publicists and key executives in all areas of the college game.  Prior to each season, voters place 70 players on the Outland Trophy watch list.  In November, a list of eight semifinalists is unveiled from which three finalists are selected.  The winner is announced at the College Football Awards presentation on the first Thursday night in December.

The Heisman Trophy is college football’s most famous award.  Given to [allegedly] the best player in the nation, in actuality, it is a prize that goes to the best quarterback or running back from a major Division I program with a winning record.  Some would say the Heisman goes to a pretty boy, one who plays a glamour position.  The Outland Trophy, which goes to an interior lineman – players who put their hands in the dirt – is awarded to the antithesis of a pretty boy.

College football’s third-oldest award was created in 1946 by Dr. John Outland, an avid outdoorsman who believed lineman didn’t get the credit they deserved and wanted an award to recognize them.  A standout at Penn in the late 1890s, Outland is one of only a few players in football history to be named All-America at two positions.  In 1897, he earned the honor as a tackle.  The following year, he garnered All-America honors at halfback.  Dr. Outland coached collegiately for four seasons before establishing his medical practice in Lawrence, Kansas .  He later founded the Kansas Relays and was inducted into the College Football Hall of Fame as a player in 2001.

The original trophy was a three-foot-by-five-foot plaque.  After it was stolen from a ballroom of the Los Angeles Biltmore Hotel in 1967, the Outland Trophy was awarded in name — but not physically bestowed upon its recipient — for two decades.

In 1988, Jim Ridlon was commissioned to design and sculpt the Outland Trophy.  Ridlon had been a fine all-around football player.  At New York’s Nyack High School, he was an All-County quarterback.  Ridlon accepted a scholarship to Syracuse, where he was a backfield mate of the great Jim Brown, then played eight years in the NFL.  A tough-as-nails defender, Ridlon played every defensive backfield position for the San Francisco 49ers.  Following his retirement from the NFL in 1964, Mr. Ridlon returned to Syracuse to become an art professor.

The Outland Trophy is a magnificent sculpture.  A 50-pound bronze and black African granite figure, the trophy depicts a lineman in an ambiguous crouch.  One hand is open, representing defense, while the other is closed, representing offense.  The player wears the bulky uniform of the 1940s, when the trophy was first awarded.

The first Outland Trophy recipient was George Connor, in 1946.  An offensive tackle and one of football’s first linebackers, he was described by sportswriter Grantland Rice as “the closest thing to a Greek God since Apollo.”  Connor was a two-time All-American at Notre Dame, where he helped the Irish to national championships in 1946 and 1947.  A first-round pick of the Chicago Bears, George Connor was named First Team All-Pro in five of his eight NFL seasons and is a member of the NFL 1940s All-Decade Team.

Originally awarded to only guards and tackles, the Outland Trophy expanded to include offensive centers and defensive interior lineman.  Ends are not eligible [Ross Browner, a standout defensive end for Notre Dame, won the award in 1976 before ends were declared ineligible].  The first great defensive lineman to win the Outland was Alex Karras, a defensive tackle from Iowa.  Four years later, Merlin Olsen was named recipient.  Defensive tackles [24] have won the Outland Trophy more than any other position, followed closely by offensive tackles [22].  The prestigious trophy has gone to 15 guards and five centers.

Michael Oher, the subject of the 2009 Academy Award-winning film The Blind Side, was an Outland Trophy finalist in 2008.

Until the early 1960s, many Outland recipients played on both sides of the line of scrimmage, including Tommy Nobis.  Winner of the 1965 Outland Trophy as a guard for the University of Texas, Nobis was the first overall pick [and inaugural selection] of the expansion Atlanta Falcons in 1966, as a middle linebacker.  Nobis was the first Outland winner to be selected with the top pick of the NFL draft.  Five others have followed suit, including Ron Yary [1968], Lee Roy Selmon [1976], Bruce Smith [1985], Russell Maryland [1991] and Orlando Pace [1997].

Born on this date in 1946, Ron Yary was a two-time consensus All-American offensive tackle at USC.  The first overall pick of the 1968 NFL draft by the Minnesota Vikings, Yary was a six-time First Team All-Pro.  The greatest offensive lineman in Vikings history, Ron Yary is a member of the NFL’s 1970s All-Decade Team and has been enshrined in both the College and Pro Football Halls of Fame.

Not surprisingly, college football powerhouses are stacked with Outland Trophy winners.  Oklahoma, Alabama and Ohio State have each produced five Outland recipients, second only to Nebraska.  Four of Alabama’s winners have come since 2008.  The Crimson Tide have won five national championships during that span.

Leon Hart is one of two linemen ever to win the Heisman Trophy.  Hart, who was a three-time All-American offensive and defensive end, won the Heisman in 1949.  But Hart did not win the Outland Trophy; the 1949 award went to Michigan State guard Ed Bagdon.  Alex Karras [1957] and John Hicks [1973] are the only two linemen to finish runner-up in Heisman voting.  Today, it is inconceivable to imagine a lineman even making the Heisman ballot.

While perhaps not the best offensive lineman in college football history, Barrett Jones is arguably the most versatile.  As a sophomore, Jones was an All-American guard for Alabama.  He switched to tackle as a junior, where he was again named All-America and winner of the 2011 Outland Trophy.  When Nick Saban needed a center the following year, he moved Jones to the pivot, where he made his third All-America team and won the Rimington Trophy as college football’s best center.  An accounting major who graduated summa cum laude, Jones helped the Crimson Tide claim three national championships.  Barrett Jones is the only player to garner Outland and a Rimington honors at two different positions and in two different seasons.

The Daily Dose has featured six Outland Trophy recipients: Alex Karras, Merlin Olsen, Bobby Bell, Mike Reid, Bruce Smith and Orlando Pace.  To access these amazing stories, click on the “search” icon [hourglass in upper right of home page, inside red toolbar], then type in the name of the subject.

The Great Nolan Ryan
Johnny Most