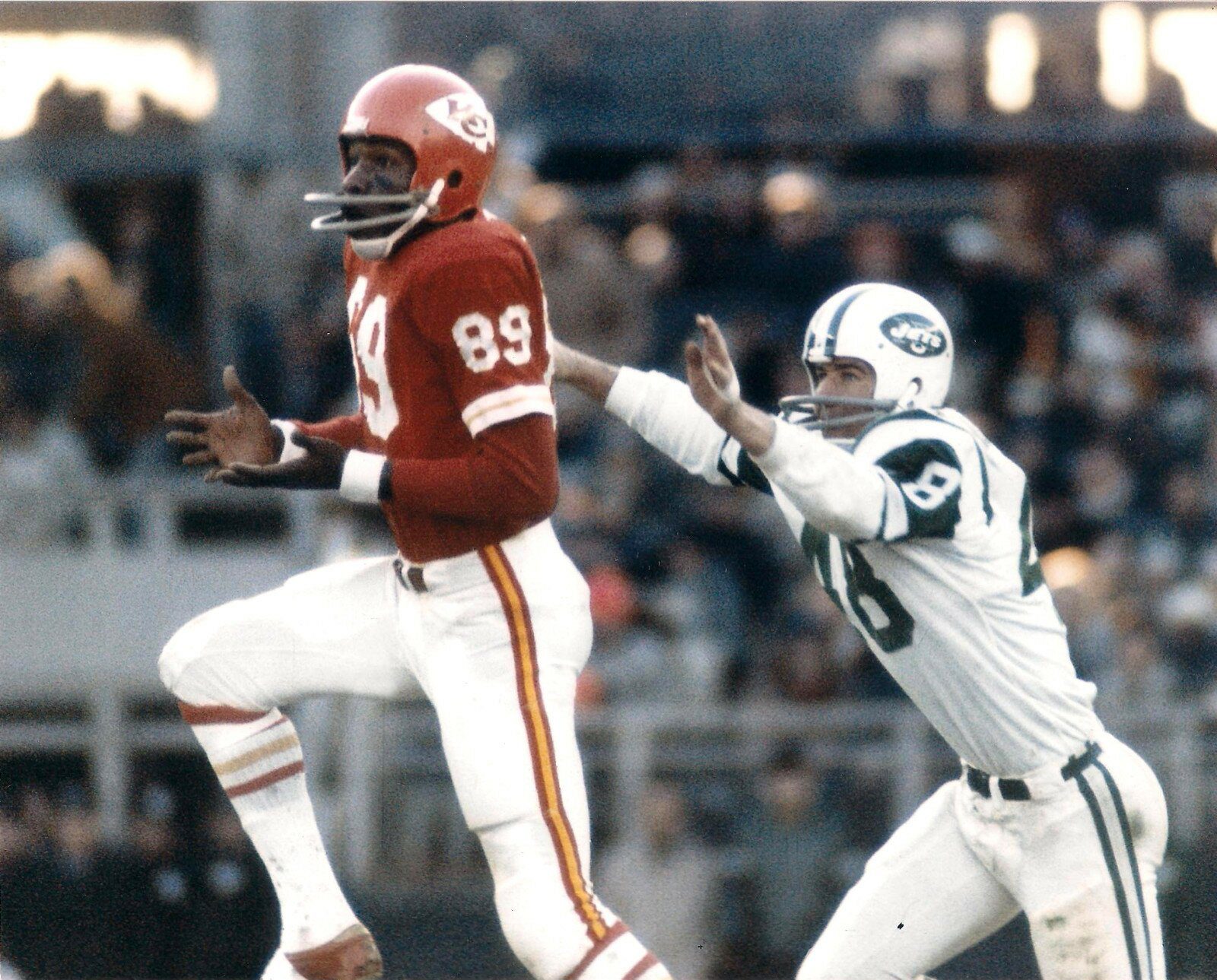 Otis Taylor is the greatest player not in the Pro Football Hall of Fame. Like LeBron James and Tiger Woods, you had to see Otis Taylor in person to truly appreciate how extraordinary he was.  The first big, physical wide receiver, he had great hands, fierce determination and was a devastating downfield blocker.  One of the most aggressive offensive players of all time, Taylor relished contact and would go out of his way to run defenders over.  And once Taylor caught the ball, he was a thing of beauty to watch. Otis was tough.  Otis was competitive.  Otis was ferocious.  In college, he once played future NBA Hall of Famer Willis Reed to a 13-13 stalemate in a game of one-on-one.  “Otis Taylor of the Kansas City Chiefs has no peer in receiving a football – left-handed, right-handed or with his hands behind his back,” wrote Sports Illustrated in November 1971.  The original big-body wide receiver, he paved the way for Terrell Owens, Randy Moss, A.J. Green and Julio Jones.

“Otis made my job easy,” said former Chiefs quarterback and Hall of Famer Len Dawson.  “If you got the pass to Otis, you knew he’d catch it.”

Taylor revolutionized the wide receiver position.  Playing in the era of bump-and-run coverage, pass catchers were assaulted at the line of scrimmage, then held, bumped and grabbed as they attempted to get open.  Those that dared come over the middle were met by head-hunters like Jack Tatum and Dick Butkus.  Taylor was a beast – and feared no one.  At 6’3” and 215 pounds, he ran the 40 in 4.4.  A fine route-runner with a long stride and strong, sure hands, Taylor set then-Chiefs records for catches, receiving yards and touchdowns.  Between 1965 and 1975, the fleet flanker amassed 7,467 yards from scrimmage. A three-time Pro Bowler, Taylor was twice named First Team All-Pro.  In his second season, he averaged a league-leading 22.4 yards per reception while leading the Chiefs to the first Super Bowl.  In 1971, he led the NFL with 1,110 receiving yards and averaged a league-best 73.9 yards per game.  Taylor played in 130 games over ten seasons, grabbing 410 passes for 7,306 yards and 57 touchdowns.  He also rushed 30 times for 161 yards and three scores. Taylor scored 60 touchdowns in ten pro seasons.  He finished in the top ten in the league in both receiving touchdowns and receiving yards per game five times and posted four top-ten seasons in receiving yards.  A two-time AFL champion, Taylor played in two of the first four Super Bowls.  He famously put the nail in the coffin of the Minnesota Vikings in Super Bowl IV, catching a Len Dawson hitch pass seven yards off the line of scrimmage then breaking an Earsell Mackbeetackle and sprinting down the sideline for a 46-yard score that sealed the game.  The 6’1, 195, Mackbee was big for a defensive back, but he crumpled as if hit by a stun gun when he tried to tackle the powerful Taylor, who was rarely brought down by just one defender. Born in Houston August 11, 1942, Taylor attended Evan E. Worthing High, alma mater of Mike Singletary, Cliff Branch and Larry Micheaux, who played in three Final Fours with the University of Houston’s Phi Slama Jama.  Taylor hunted rabbits as a boy, chasing them down and then whacking them with a stick.  A high school quarterback, he could throw a football 75 yards.

“The difference in us,” said Kansas City coach Hank Stram after winning the 1966 AFL title in Taylor’s second season, “is that we’re able to travel much faster.  In the past, it was like taking a bus.  Now it’s like taking a jet – mainly because of Otis Taylor.”

Taylor went to Prairie View on a basketball scholarship, but also excelled in football.  He played quarterback until his sophomore year, when he was replaced by Jim Kearney, who went on to play safety for the 1969 Kansas City Chiefs Super Bowl team.  The pair was unstoppable and led Prairie View to the 1963 NAIA national title game, where they lost 33-27 to St. John’s, coached by the legendary John Gagliardi.  Prairie View later retired his number 17.  Taylor was inducted into the Black College Hall of Fame in 2016. The Kansas City Chiefs selected Taylor in the fourth round of the 1965 AFL draft.  The Philadelphia Eagles also took him in the 15th round [203rd overall] of that season’s NFL draft.  At the height of the bidding wars between the two leagues, the NFL would hire “babysitters” to keep college talent hidden from AFL scouts.  The Eagles were hiding Taylor in Dallas when Chiefs scout Lloyd Wells discovered the brilliant burner stowed at the Continental Motel.  Wells posed as a newspaperman and helped Taylor escape to the Ft. Worth Airport.  The next day he signed with the Chiefs.  Otis Taylor was inducted into the Kansas City Chiefs Hall of Fame in 1982. On this date in 1971, the Chiefs played their final game at Municipal Stadium in Kansas City.  The Chiefs had won the AFC West and were playing host to the Miami Dolphins, who’d captured the first AFC East title in franchise history.  One season before the Dolphins would attain perfection and become pro football’s only undefeated team, Miami was a juggernaut in the making.  Their yet-to-be-dubbed No Name Defense stymied Otis Taylor, holding the fabulous flanker to 12 yards on three catches.  Miami would go on to win the longest game in pro football history 27-24 on a 37-yard Garo Yepremian field goal in the second overtime.  Don Shula’s Dolphins would then beat his former team, the Baltimore Colts, 21-0 in the AFC title game before falling to Dallas in the Super Bowl.

The Chiefs selected Gale Sayers in the first round of the 1965 AFL draft and linebacker Mike Curtis in the third.   They signed neither but picked up three receivers who helped KC to the only Super Bowl victory in franchise history.  In addition to Taylor, the Chiefs nabbed Frank Pitts and Gloster Richardson.

Otis Taylor belongs in the Pro Football Hall of Fame.  He was every bit as good as his AFL contemporaries, including Don Maynard and Lance Alworth, the starting receivers on the AFL All-Time Team.  Consider Taylor’s numbers against other hall of fame wideouts.  He has more receptions [410] than Lynn Swann, Tom Fears, Bob Hayes, Elroy Hirsh, Dante Lavelli or Pete Pihos.  He caught more touchdown passes [57] than Fears or Swann and amassed more receiving yards [7,306] than Fears, Swann, Hirsch, Lavelli or Pihos. The talented Taylor averaged a whopping 17.8 yards per reception, better than hall of famers Raymond Barry, Fred Biletnikoff, Michael Irvin, Charlie Joyner, Steve Largent, Bobby Mitchell, Art Monk, John Stallworth or Charlie Taylor.  Playing in an era when getting off the line of scrimmage was akin to surviving a mugging, his yards-per-reception average is higher than those of current NFL players Odell Beckham Jr., Amari Cooper, Julio Jones and JuJu Smith-Schuster, all of whom play under much more receiver-friendly rules. The brilliance of Otis Taylor cannot be overstated.  The only player from Hank Stram’s innovative Offense of the 70sin the Pro Football Hall of Fame is quarterback Len Dawson, who was inducted in 1987.  Isn’t it time that his favorite target – and one of the greatest flankers in football history – gets a bust alongside Dawson in Canton? Now 77, Otis Taylor has spent the last decade-plus bedridden and unable to walk or talk.  Ravaged by Parkinson’s disease and dementia caused by years of playing a violent game, he is dependent on a feeding tube to survive.  Mr. Taylor requires constant care and medical supervision.  He is looked after by his older sister, Florence Odell Taylor, a licensed vocational nurse who has sacrificed greatly to attend to her brother.  Yet the NFL has not contributed one dime to the medical needs of Otis Taylor, who continues to be overlooked by the game he gave his life to.