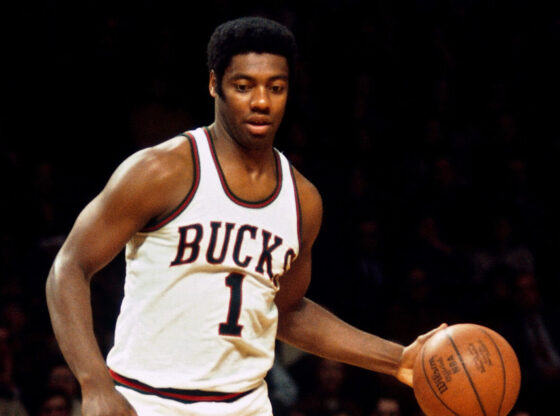 In basketball, a triple-double is achieved when a player records a double-digit total in points, rebounds, and assists. LeBron James has done it 37 times in his 11 year NBA career. Oscar Robertson had 41 triple doubles in one season.

Born in Charlotte, Tennessee on this date in 1938, his family moved to Indianapolis when Oscar was four years old. He grew up dirt poor, living in the segregated, government-subsidized Lockefield Gardens housing project northwest of downtown. Robertson began playing basketball against his two older brothers at age six. At 14, he entered Chrispus Attucks High School, an all-black school that opened in 1927 but, due to racial inequities, was not permitted to play in Indiana’s high school basketball tournament until 1942. Chrispus Attucks was a basketball powerhouse in the 1950s, going 179-20 between 1950 and 1957. In 1954, Robertson was a sophomore and led Attucks to the state semi-finals, where they lost to eventual state champions, Milan High School, whose story would later become the basis of the 1986 film Hoosiers. The following year, Attucks went 31-1 and won the state championship, a first for any all-black school in the nation. As a senior, Robertson led the “Flying Tigers” to a perfect 31-0 record while compiled a then-record 45 game win streak and successful defense of the state title. Robertson was named Indiana “Mr. Basketball” in 1956 and, after graduation, accepted a scholarship offer to the University of Cincinnati.

Oscar Robertson continued his brilliance on the basketball court at U of C, earning a starting position at guard as a sophomore [freshman were ineligible for varsity competition at that time] and winning the national scoring title. He was named All-American and was chosen College Player of the Year in 1958. The Bearcats advanced to the Final Four in Robertson’s junior and senior seasons but did not win a national championship. Oddly, Cincinnati won two straight NCAA titles after the best player in school history graduated in 1960. “Big O” won the national scoring title, was named All-American and was selected Player of the Year in both his junior and senior seasons. He set 14 NCAA records and 19 school records, including Cincinnati’s all-time leading scorer. After college, Robertson was selected to the 1960 U.S. Olympic basketball team, which he co-captained with Hall of Famer, Jerry West. Robertson led the U.S. to nine straight wins by an average margin of over 42 points in route to the gold medal. Three members of the 1960 team are enshrined in the Naismith Hall of Fame and ten [of twelve] later played in the NBA.

The Cincinnati Royals selected Oscar Robertson with the first pick of the 1960 NBA Draft. He was named Rookie of the Year, All-NBA First Team and was the MVP of the 1961 All-Star Game. The following season, he became the only player in NBA history to average a triple-double for an entire season, with 30.8 points, 12.5 rebounds and 11.4 assists. He played in 79 games, scoring over 30 points in 39 of them and on eight occasions scored over 40. Robertson dished out 899 assists to smash Bob Cousy’s single season record of 715 and recorded 41 triple-doubles in the 1961-62 season. He narrowly missed averaging a triple-double the following year, falling just short with an average of 9.5 assists per game. Robertson led the Royals to a 55-25 record in 1963-64, their best mark in his ten years with Cincinnati, and Big O was named league MVP, but they could not get past the Boston Celtics, who won ten championships in 11 seasons between 1958 and 1969. Cincinnati never advanced past the first round of the playoffs from 1964 to 1970. On April 21, 1970, the Royals stunned the basketball world by trading Oscar Robertson to the Milwaukee Bucks. Robertson teamed with Lew Alcindor [later Kareem Abdul-Jabbar] to compile a league best 66-16 regular season record and culminated a dominant post season by sweeping the Baltimore Bullets in the NBA Finals. Milwaukee won division titles the following two years and returned to the NBA Finals in 1974, losing to the Celtics in seven games. Robertson retired following the season and Milwaukee fell to last place in the season after his departure.

Oscar Robertson was 6’5”, 220 pounds and was the first “big guard” in NBA history, paving the way for players like Magic Johnson to follow. He had 181 career triple-doubles, 43 more than Magic, who is second on that list. Robertson could score inside, outside and was an outstanding playmaker. He is the only guard in NBA history to average more than ten rebounds per game, doing so three times. Big O played in the days before the three-point shot, yet became the first player in NBA history to lead the league in scoring and assists in the same year. At the time of his retirement, he was the NBA’s all-time leader in assists, free throws made and was the second all-time leading scorer. Oscar Robertson was enshrined in the Naismith Basketball Hall of Fame as an individual in 1980 and as part of the 1960 Olympic team in 2010. He was named Player of the Century by the National Association of Basketball Coaches in 2000 and one of the 50 Greatest Players in NBA History in 1996. In 1998, the USBWA renamed their college Player of the Year Award the Oscar Robertson Trophy in his honor.