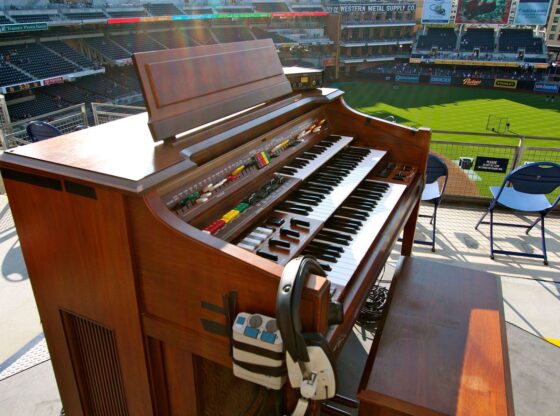 Not only is Chicago the City of Broad Shoulders, it is also the home of organ music in sports.

In the early decades of the twentieth century, organ music accompanied daily life.  Organs were in pizza parlors, town halls, shopping malls and movie theatres.  Organ music was a vital element of silent films but, with the advent of “talking pictures” in the late 1920s, the organ made its leap from movie theatres to sporting arenas.  Paddy Harmon helped finance and build Chicago Stadium, which opened in 1929.  He wanted organ music to liven up Blackhawks hockey games.  “Gentlemen, we are going to have the finest sports arena in the country and we want the organ to be one of its great features.”  The Stadium was the first sporting venue to feature an organ–a Barton pipe model that stood seven feet tall, held six keyboards and produced volume equal to 25 brass bands or a 2,500-piece orchestra.  Other venues followed, with Madison Square Garden installing an electric organ in 1936 and Boston Garden following suit three years later.

The summer of 1941 was an epic season in baseball.  Ted Williams hit .406 and remains the last major leaguer to average .400 for an entire season.  Joe DiMaggio hit in 56 straight games, a record that stands today.  In April 1941– less than eight months before the Japanese bombed Pearl Harbor–the first ballpark organ appeared at Wrigley Field in Chicago.  Prior to that year, the only music heard at ballparks was provided by infrequent performances by military bands.  On a Saturday afternoon in April, the St. Louis Cardinals were in town to play the Cubs and keyboardist Roy Nelson entertained the crowd with classic and soulful compositions before—but not during—the game.  After the performance, The Sporting News wrote, “What a joy!  A cushioned seat in a beautiful ballpark, delicious hamburgers with onions, a can of beer, victory and the restful, dulcet tone of a pipe organ.”  The following year, the first permanent baseball organ was installed at Ebbets Field [Daily Dose, October 30], home of the Brooklyn Dodgers.  Gladys Gooding, who also played at Madison Square Garden [Daily Dose, December 15], was hired as keyboardist, adding to the already-lively sounds provided by the Dodgers five-piece house band: the Dodgers Sym-Phony.  Gooding, who had played organ for silent films before talkies, decided to try her musical skills in sports venues, and pioneered the baseball organ, matching her musical selections to the game itself.  Mrs. Gooding entertained crowds at Ebbets until the Dodgers bolted for Los Angeles in 1957.

Because of its volume and the fact that its size was of no matter, the organ was a natural and became a tradition at ballparks.  John Kiley was the organist at Fenway Park from 1953 to 1984.  Red Sox Executive VP Charles Steinberg observed, “Baseball is personal, and music enhances that personal connection.  That’s why the organ plays a key role.”  Eddie Layton played organ at Yankee Stadium from 1967 to 2003.  Across town, Jane Jarvis entertained Mets fans for 15 seasons.  Pittsburgh Pirates manager Frankie Frisch once paused while hitting pre-game infield practice during a visit to Ebbets Field to listen to Gladys Gooding play.  “Gee, I like that organ.”  Not everyone was a fan of organ music, however.  In 1942, J. Reid Spencer, a 70-year-old resident of Flatbush, the neighborhood surrounding Ebbets Field, took the Dodgers to court, claiming the organ music interrupted his noon naps.  The case was dismissed when it was discovered Mr. Spencer was hard of hearing.  Lambert Bartak, once an accordion accompanist to Johnny Carson’s early magic shows, played organ at Rosenblatt Stadium in Omaha—home of the College World Series—for over 50 years.  He was once tossed by an umpire for playing the Mickey Mouse Club theme song after a controversial call.

The organ, like peanuts, Cracker Jack, the smell of hot dogs and chairs tacky from cotton candy, is part of the ballpark experience.  It’s part of baseball, just like the grass on the field.  Nancy Faust performed at Chicago White Sox games for 41 years and is the best ballpark organist in history.  She began her career perched in the centerfield bleachers at Comiskey Park and soon became a major entertainment force.  It was Faust who inaugurated the tradition of Sox broadcaster Harry Caray singing Take Me Out To The Ballgame during the seventh inning stretch.  Sports Illustrated called her baseball’s “MVO—Most Valuable Organist.”  She received a gold record from Mercury for popularizing Na Na Hey Hey Kiss Him Goodby by making it the White Sox theme song and is part of an exhibit in the Baseball Hall of Fame.  Good organists can be funny.  During the streaker craze of the 1970s, a naked man sprinted across the Veteran’s Stadium field in Philadelphia, prompting the Phillies’ keyboardist to play Peggy Lee’s Is That All There Is?  They can also capture the emotion of the moment.  During the Dodgers’ last game at Ebbets Field in 1957, Gooding played After You’re Gone, If I Had My Way, and, after the final out had been recorded, Auld Lang Syne.

On this date in 1941, the first organ appeared at a baseball park, when Roy Nelson entertained 8,499 Wrigley Field faithful before the Cubs lost to the St. Louis Cardinals, 6-2, in an afternoon contest.