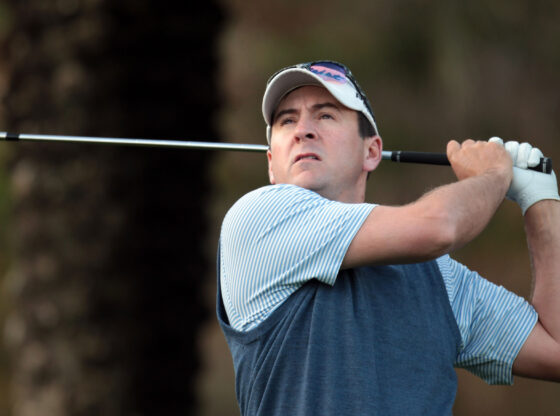 Golf is a difficult and cunning game.

One day you have it, the next day you don’t.  It can be the most rewarding — and at the same time most humbling –of sports.  Here are a dozen players who know the feeling, men who were on top of the golf world for one glorious day, only to fade into obscurity.  We bring you golf’s biggest One-Hit Wonders.

Bob May.  At the height of Tigermania, the 1991 Walker Cupper drew even with Woods during the final round of the 2000 PGA Championship at Valhalla.  The two wound up in a three-hole playoff, where Woods added to his legend by draining a 25-foot birdie putt on the first extra hole, chasing it to the cup and famously pointing at the ball.   The win gave Woods the fourth of his 15 career majors.  Bob May eventually lost both his PGA and Web.com Tour cards.

Jack Fleck.  Six months after joining the Tour full time, Fleck had his first win – on golf’s biggest stage – at the 1955 U.S. Open.  After birdieing the 72nd hole at Olympic Club to force an 18-hole playoff with his idol, Ben Hogan, Fleck pulled off one of the biggest upsets in golf history. The 32-year-old former club pro bested Hogan by three shots in the playoff and never won another major.

Len Mattiace.  At the 2003 Masters, this little-known American fired a final round 65 to force a playoff with Mike Weir.  Sadly, the Wake Forest grad completely unraveled on the first extra hole, allowing Weir to win with a bogey.  Mattiace went on win two Tour events in 2002 before joining the Champions Tour in 2018.

Mark Brooks.  In 1996, Brooks won three Tour events.  The last came at the PGA Championship, where the 35-year-old former Texas Longhorn held off Kenny Perry at Valhalla to claim his only major.  It was also the last win of his career.

Steve Jones.  Perhaps the most boring player in history, Jones went through sectional qualifying to earn a spot in the field for the 1996 US Open.  On Sunday, he withstood the charges of Davis Love and Tom Lehman to capture the fifth of eight career wins – and only major.

Ben Curtis.  In 2003, Curtis headed to Royal St. George’s to compete in his first major.  He was the only player in the field to finish under par, staving off Vijay Singh and Thomas Bjorn to win by one shot.  Curtis, who started the week as a 300-to-1 underdog, joined Francis Ouimet [1913] as the only players to win in their major debut.

Paul Lawrie.  While Jean Van de Velde famously collapsed on the 72nd hole of the 1999 Open Championship at Carnoustie, Lawrie fired a final round 67 to overcome a ten-shot deficit and put himself into a playoff.  The quiet Scot held off Van de Velde and Justin Leonard in the playoff to hoist the Claret Jug.

Shaun Micheel.  Nursing a one-shot lead on the final hole of the 2003 PGA Championship at Oak Hill, Micheel gouged a seven-iron out of the rough to within inches.  His tap-in birdie gave the Indiana University grad his first and only PGA Tour victory.

Rich Beem.  Seven years after quitting the game to become a salesman, Beem found himself in a Sunday afternoon shootout with Tiger Woods at the 2002 PGA Championship.  After Woods birdied the final four holes to grab the lead, Beem roared back with a final round 68 to claim the Wannamaker Trophy.

Todd Hamilton.  After winning 11 times on the Japan Tour, Hamilton finally earned his PGA Tour card in 2004.  He made the most of it during his rookie season, capturing the Honda Classic in his debut event and then beating Ernie Els in a four-hole playoff to become 2004 Champion Golfer of the Year.  Following his win at Royal Troon, Hamilton disappeared.

Michael Campbell.  Campbell went through sectional qualifying to earn a spot in the 2005 U.S. Open.  He entered the final round four shots back, then fired a 69 on Sunday to fend off Tiger Woods for a two-shot victory.  Campbell became the second New Zealander [Bob Charles] to win a major and the second and only qualifier since Steve Jones to win the U.S. Open.

Wayne Grady.  This Australian shot 72-67-72-71 at the 1990 PGA Championship at Shoal Creek to beat Fred Couples by three shots.  It was Grady’s second and final win on the PGA Tour.

15 of the Best Football Nicknames
Stickum