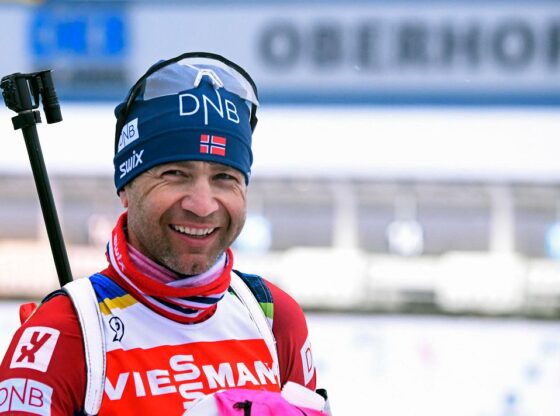 Ole Einar Bjorndalen is the most decorated winter Olympian of all time.

Biathlon is a winter sport that combines cross-country skiing with rifle shooting, and Ole Einar Bjorndalen [OH-lay EYE-nar bee-YORN-da-lin] is the greatest the sport has ever known.  He has competed in six Winter Olympics and has won 13 medals—eight of them gold—representing his home country of Norway.  Bjorndalen burst onto the international scene at 19 during the 1993 Junior World Championships, where he won gold medals in three of the four events he entered.  His 44 World Championships are double that of his nearest rival and his 95 World Cup victories are the most of all-time—and more than twice that of any other biathlete in history.  “The King of Biathlon” has finished in the top three in over half of his races.  In 483 career starts, Bjorndalen has won 132 times, finished second in 74, and claimed third in 43 biathlon competitions.

Rooted in the skiing traditions of Scandinavia, where inhabitants revered the Norse god Ullr as both the god of skiing and hunting, biathlon originated in Norway as a form of military training.  In the 18th century, military contests were organized that combined cross-country and downhill skiing with rifle shooting.  Later, a branch of the Norwegian government was established to promote civilian marksmanship in support of national defense.  Today, biathlon—which means ski shooting in Norwegian—enjoys its greatest popularity in Germany, Austria, Finland, Poland, Sweden and Russia.

The three most important international biathlon competitions include the Winter Olympics, World Championships, and World Cup.  Originally called Military Patrol, biathlon was first contested at the 1924 Winter Games.  It was relegated to a demonstration sport until 1960, when it was added permanently to the Olympic program.

Biathlon requires contestants to ski through a cross-country trail system that includes either two or four shooting rounds, half in the prone position, the other half standing.  For each shooting round, the biathlete must hit five targets and receives a penalty for each missed target.  The contestant with the fastest overall time wins.  Skiers carry small-bore bolt-action rifles during the race.  Weighing just under eight pounds, the .22-caliber guns must be with the skiers at all times during the race, and biathletes must propel themselves along the track using only skis and poles.  There are five circular targets—each 50 meters away—to be hit in each shooting round.  The target diameter is 45 millimeters [1.8 inches] when shooting in the prone position, which is considered easier than the standing position.  When standing, the target’s diameter is 115 millimeters [4.5 inches].  Targets flip from black to white when hit, giving the biathlete and spectators instant visual feedback for each shot fired.

The sport is governed by the International Biathlon Union [IBU] in Salzburg, Austria, and competitions are comprised of five events.  The 20 kilometer Individual race is the oldest biathlon event.  Skied over five laps, the biathlete shoots four times each lap, alternating between prone and standing, for a total of 20 targets.  For each missed target, a penalty time—usually one minute—is added to the skier’s total time. The Sprint is an individual race covering 10 kilometers, raced over three laps.  The athlete shoots twice ten different times, five prone and five standing.  For each miss, a biathlete must ski a penalty loop of 150 meters before continuing.  In the Pursuit event, biathletes starts are separated by their time differential from the Sprint competition.  The 12.5 kilometer course is skied over five laps and includes four shooting rounds with each miss requiring a penalty loop of 150 meters.  The contestant crossing the finish line first is the winner.  For safety reasons, only the top 60 contenders are allowed in the Pursuit race and shooting is done in lanes on a first-come, first-served basis.  Mass Start has all biathletes starting at the same time and the first across the finish line wins.  This 15 kilometer race involves five laps and four rounds of shooting, with skiers shooting in the lane number that corresponds to their bib number.  Each miss requires a penalty loop of 150 meters and the field is comprised of the top 30 ranked athletes.  In Relay, four biathletes each ski three laps covering a total of 7.5 kilometers, with two shooting rounds.  For each round of five targets, there are eight bullets available.  If after eight bullets there are still misses, one 150 meter penalty loop must be taken for each missed target remaining.

Born in Drammen, a port and river city in the eastern part of Norway, on this date in 1974, Ole Einar Bjorndalen made his World Cup debut in March 1993 with three gold medals.  The following year, he made the Olympic team as a 20-year-old.  Bjorndalen won his first Olympic medals at the 1998 Nagano Games, claiming gold in Sprint and silver in Relay.  Four years later in Salt Lake City—at 28 and in his prime–“The Cannibal” swept all four events he entered, becoming the only biathlete ever to win every race in the same Olympic Games.  In 2006, he earned two silver medals and one bronze in the Turin Games.  At the 2010 Vancouver Games, Bjorndalen won his ninth Olympic medal—a silver in Individual–to became the most successful biathlete in Winter Olympic history.  He capped off the competition by leading Norway to gold in the relay, tying legendary countryman Bjorn Daehlie for the most gold medals [8] in the history of the Winter Games.  The 40-year-old Bjorndalen added to his medal count four years later in Sochi, claiming first place in the Sprint event.

Bjordalen is a solid shooter but not one of the top marksman in the world.  His record for both prone and standing are nearly identical, yet it is his superb conditioning and athleticism [he won the Beach Volleyball Championship in Laguna Beach in 2001] that sets him apart.  Cross-country skiing is one of the most aerobically-challenging activities in the world.  In 2006, Mr. Bjorndalen won a World Cup cross-country race in Sweden, becoming the first biathlete to win a cross country competition.  Superb marksmanship requires slow, relaxed breathing and heartrate control, while cross-country ski racing demands the highest level of fitness.  The combination of the two make biathlon a difficult and unique event.  Mr. Bjorndalen’s two decades of dominance is unparalleled in the history of winter sports.

Ole Einar Bjorndalen was voted Best Male Athlete at the 2014 Winter Olympics in Sochi and has twice been voted Norwegian Sportsman of the Year.  In 2008, a bronze statue of Ole was erected in his hometown of Simonstrada, Norway and he intends to compete in the 2018 Games in Pyeongchang, South Korea.