Notre Dame’s Finest – 11 Of The Best Players In History

In honor of St. Patrick’s Day, here are our top ten Fighting Irish football players of all time [in no particular order].

The most clutch player in school history, Joe Montana led the Irish to the 1977 national championship.

The last of only two lineman ever to win the Heisman Trophy, Leon Hart was a three-time All-American who led Notre Dame to three national titles.  The first pick of the 1950 NFL Draft guided the Detroit Lions to three league championships in eight years.

The first player to win the Heisman while playing for a losing team, Paul Hornung played halfback, fullback and quarterback for the Fighting Irish in the mid-1950s.  He later starred for Vince Lombardi’s Green Bay Packers.

As a sophomore, Jerome Bettis scored a school-record 23 touchdowns, which still stands.  The Bus was a six-time Pro Bowler in 13 NFL seasons, driving him to the Pro Football Hall of Fame.

The legendary Grantland Rice wrote that George Connor was “the closest thing to a Greek God since Apollo.”  A two-time All-American and first winner of the Outland Trophy as college football’s best lineman, Connor never lost a game during his time in South Bend.

As a wide receiver and kick returner, Tim Brown gained the most all-purpose yards in school history.  In 1987, Touchdown Timmy became the first wideout to win the Heisman Trophy and is a member of both the college and pro football halls of fame.

An All-American defensive tackle who led the Irish to the 1966 national championship, Alan Page is one of only two defensive players ever named NFL MVP.  A member of both the college and pro football halls of fame, Page served as a Minnesota Supreme Court justice for over 20 years.

Possibly the best all-around player in school history, John Lujack quarterbacked Notre Dame to the 1943 national championship as a sophomore.  After serving two years in the Navy during World War II, the real-life John Wayne returned to guide N.D. to two more titles while winning the 1947 Heisman Trophy.  Lujack lettered in four sports at Notre Dame and later led the NFL in rushing and passing.

Ross Browner may be the finest defensive player Notre Dame has ever produced.  A four-year starter at defensive end, he was twice named All-American.  In 1977, Browner swept the Outland, Maxwell, Lombardi awards while being named UPI Lineman of the Year.

A track and football star, Raghib Ismail is the most feared player ever to wear the Golden Helmet.  A 1990 consensus All-American and Walter Camp Award winner, the Rocket was an electrifying wide receiver and kick returner, earning him a spot on the Top 100 Greatest College Football Players of All-Time team. 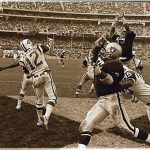