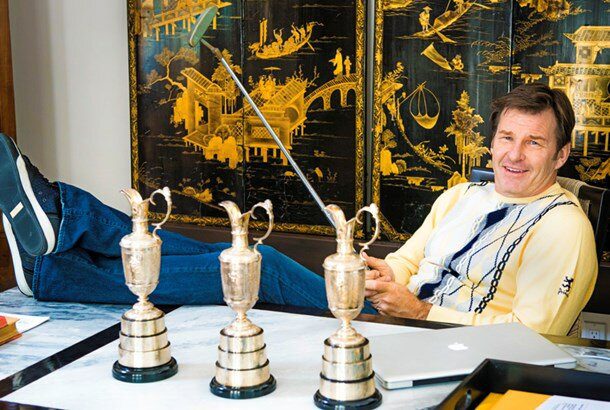 Nicholas Alexander Faldo is the most successful golfer Britain has ever produced.  A top player of his era,  and renowned for his gritty determination and unrelenting work ethic, Faldo spent 98 weeks as the top-ranked player in the world.  The 6’3” Harrison Ford look-alike was at his best in the biggest moments.  Composed under pressure, Faldo captured three Masters and three Open Championship titles in seven years. A hallmark of consistency, Faldo displayed a single-minded dedication to the game.   A brilliant tactician, he was a superb ball striker with a strong competitive mind.  Although tall and broad-shouldered, his was never a power game, relying instead on distance control and accuracy.  In his first Open Championship win — at Muirfield in 1987 — Faldo famously made 18 straight pars to beat Paul Azinger and Rodger Davis by a single shot. Winner of six major championships and with 40 professional wins, Faldo is the most accomplished Ryder Cup player in history.  After becoming the youngest ever to make the European team in 1977, the rugged Brit went on to play in the biennial competition 11 straight times.  Between 1977 and 1997, Faldo collected a record 25 Ryder Cup points for the Europeans, including four at the 1983 event.  At the 2008 matches in Valhalla, Sir Nick captained the European side. Born outside London on this date in 1957, Faldo was a gifted all-around athlete who had the makings of a first-class cyclist.  He took up golf at 14 after watching the 1971 Masters on television. “I was just absolutely mesmerized when I saw the Masters that year, particularly by Jack Nicklaus striding across Augusta’s impossibly green fairways.  I marched downstairs and announced to my Mum that I was going to take up golf.  ‘You’re having a haircut first,’ she said, which seemed like a fair enough deal at the time – even if Augusta was waiting.” By 17, Faldo was a successful British amateur.  In 1975, he won ten titles and earned a golf scholarship to the University of Houston.  Faldo attended for ten weeks, then returned home and joined the European Tour the following year.  Faldo’s first pro win came in Scotland in 1977, when he won the Skol Lager Individual in a playoff.  In his second season as a professional, the 20-year-old Faldo made his first Ryder Cup team. In 1984, with ten European Tour titles [but no grand slam wins] to his credit, Faldo enlisted swing coach David Ledbetter to overhaul his game.  He emerged with a move which emphasized the large muscles of the body, employing Ledbetter’s tenet that “the dog wags the tail.”  The risky mid-career change took time, but Faldo emerged a different player.  The payoff came in 1987, when Faldo won the Peugeot Spanish Open to claim his first victory in three years. An intimidating presence who unnerved his opponents, Faldo was the best player in the world in the late 1980s and early 1990s.  He won two majors three times each, and finished second at the 1988 U.S. Open after losing in an 18-hole playoff to Curtis Strange.  At the PGA Championship at Bellerive four years later, he finished runner-up to Nick Price. Perhaps no player since Ben Hogan was as fastidious about his golf swing as Faldo.  Seeking perfection, he honed his game for hours, attending to every detail in his swing.  Faldo’s six major championship titles ties him with Lee Trevino.  Only 11 players in history have won more.  While the hours spent on the practice range paid dividends on the golf course, they took a toll at home, resulting in three failed marriages. Faldo’s final win came at the 1997 Nissan Open in Los Angeles.  In October 2006, he signed with CBS to serve as lead golf analyst. While never considered charismatic, Sir Nick has surprised many with his dry wit and insightful commentary.  A father of four, Faldo operates a golf course design company, opened several teaching schools and has written a series of golf instructional books. In June 2009, Faldo was knighted by Queen Elizabeth II, becoming the only British golfer to have received that honor in his own lifetime.  Sir Henry Cotton accepted the honor of knighthood in 1987 but died later that year and the honor was bestowed posthumously.

Faldo was inducted into the World Golf Hall of Fame in 1998.  In 2014, Britain’s greatest golfer received the Payne Stewart Award, presented annually to a player whose “values align with the character, charity and sportsmanship that Stewart showed.”  In two decades of professional golf, Mr. Faldo earned over €8 million on the European Tour and more than $ 5 million playing the PGA Tour.

The 147th Open Championship gets underway at Carnoustie tomorrow.  Quite fitting that one of the tournament’s greatest champions celebrates a birthday on the eve of golf’s oldest major championship