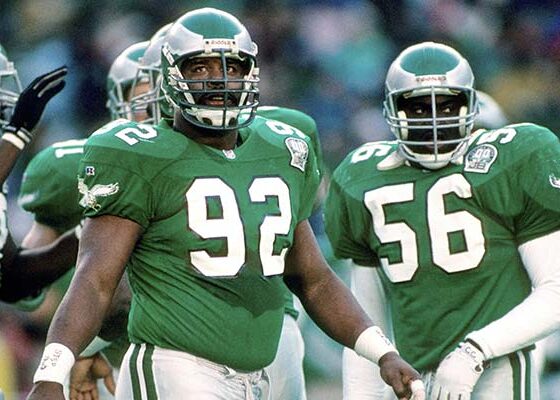 While offense is glamorous, defense wins championships.  From the Purple People Eaters to Doomsday, and from No Name to the Killer B’s, pro football has produced some great ones

When the 1991 Philadelphia Eagles lost quarterback Randall Cunningham for the season with a knee injury in Week One, the defense banded together and led the league in both passing and rushing yards allowed.  A late-season loss to Dallas kept Philly out of the playoffs, otherwise they would be ranked higher.  Led by Reggie White, Seth Joyner and Clyde Simmons, the Eagles lost defensive tackle Jerome Brown in a car accident in the off-season and the unit was never the same.

The 1962 Green Bay Packers had a rock-solid defense front to back.  Vince Lombardi’s greatest defense featured five future Hall of Famers and held opposing quarterbacks to a 43.5 passer rating.  The Packers allowed just 14 touchdowns in 14 games, with four of them coming in the fourth quarter of blowout games.  The nearly 20-point differential between the Packers and their opponents is the best of any team from the 1960s.

Led by the Legion of Boom, the 2013 Seattle Seahawks were dominant.  They became the first team since the 1985 Chicago Bears to lead the league in points allowed, yards allowed and takeaways. The Seahawks secondary, which sent three players to the Pro Bowl, recorded 28 interceptions.  In Super Bowl XLVIII, Seattle completely shut down Peyton Manning – who was having the best season of his career – and Denver’s record-setting offense, winning 43-8.

Although Jon Gruden was their coach, the 2002 Tampa Bay Buccaneers were built by Tony Dungy, whom the Bucs fired in 2001.  Led by linebacker Derrick Brooks, the Bucs flew to the football, and were the NFL’s top-ranked defense. They snatched 31 regular season interceptions and nine in the playoffs.  In Super Bowl XXXVII, Tampa Bay faced the explosive Oakland Raiders, who featured the league’s number-one rated offense.  The game was no contest, as the Bucs intercepted quarterback Rich Gannon a record five times, returning three for touchdowns.  Behind defensive lineman Warren Sapp and Simeon Rice, Tampa Bay also sacked Gannon five times in a 48-21 rout.

While head coach Hank Stram’s offense was innovative, the defense was the backbone of the 1969 Kansas City Chiefs.  The massive front four lined up in the “Triple Stack,” allowing one of the best linebacking corps in history room to roam.  When regular season injuries forced Stram to go to third-string QB Mike Livingston, the defense responded with a league-leading 32 interceptions, 48 sacks and two shutouts.  Led by six future Hall of Famers, the Chiefs fashioned a late-game goal line stand to beat Joe Namath and the defending Super Bowl champion Jets, 13-6, in the AFL playoff game.  They then traveled to Oakland, where they limited the high-octane Raiders to a lone touchdown and advance to Super Bowl IV.  In the title game, Kansas City held the heavily-favored Minnesota Vikings to just two rushing first downs and forced five turnovers in a convincing 23-7 victory.

The 1986 New York Giants – the Big Blue Wrecking Crew – dismantled the league.  Led by consensus NFL MVP Lawrence Taylor, the Giants posted a 14-2 regular season record.  In the divisional playoffs, they knocked Joe Montana out of the game en route to a 49-3 drubbing of San Francisco, then held the Redskins Jay Schroeder to 20-of-50 passing in a 17-0 shutout in the NFC Championship game.  New York capped the year off by throttling Denver in the Super Bowl, 39-20.  Defensive coordinator Bill Billichick’s unit recorded 59 sacks on the season and held three postseason opponents to 23 points.

If ever a team won a Super Bowl on the backs of its defense, it was the 2000 Baltimore Ravens.  This fast and nasty unit allowed fewer than ten points per game in 20 games: 16 regular-season and four playoff contests.  Led by Ray Lewis and Rod Woodson, the Ravens allowed a measly 2.7 yards per rushing attempt and gave up the fewest points in the league.

The Pittsburgh Steelers won four Super Bowls in six years between 1974 and 1980.  While the 1976 Steelers did not win it all, they featured the best defense in Pittsburgh history, and the second-greatest of all time.  The Steel Curtain picked up the slack for an injury-riddled offense, pitching five shutouts.  The Steelers did not allow a touchdown for 22 straight quarters and surrendered only 28 points in the last nine games of the season, yet lost to Oakland in the AFC Championship game.  Pittsburgh had several great defensive units in their dynasty years and the ’76 group was their best-ever.

The 1985 Chicago Bears had the finest defense in football history.  The “46” defense of Buddy Ryan was relentless, savage and fun to watch.  The ’85 Bears led the league in fewest yards, points and first downs while generating the most turnovers en route to a 15-1 regular season.  The postseason brought distilled mayhem, as the Bears shut out both the New York Giants and Los Angeles Rams in the playoffs and did not allow a touchdown for eleven quarters.  Behind the best front seven ever assembled, Ryan’s wrecking crew capped things off with a 46-10 thrashing of the New England Patriots in Super Bowl XX.