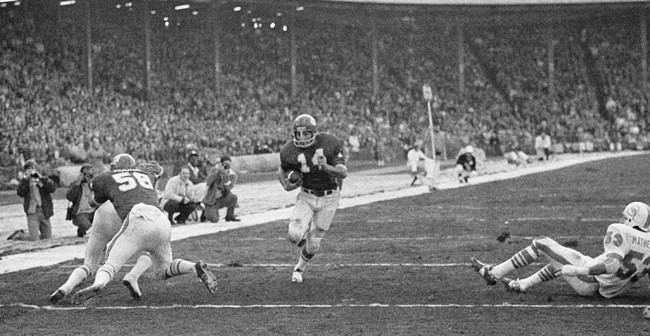 The longest game in National Football League history was played 44 years ago today.

On Christmas Day, 1971, the Kansas City Chiefs played host to the Miami Dolphins at Kansas City Municipal Stadium in a Divisional playoff game. Both teams came into the contest with identical 10-3-1 records and each had won their respective divisions. The Dolphins, who had joined the AFL six seasons earlier as an expansion team, were coached by Don Shula [Daily Dose, September 22], who was in his second season in Miami, while the Chiefs were American Football League royalty, having compiled a 87-43-3 record—best in league history—as an original AFL franchise. Kansas City was coached by Hank Stram, the only head coach in the team’s 12 year history. Miami was making its second straight playoff appearance, having lost to the Oakland Raiders in the first round the previous season, while K.C. was looking to cement their dynasty, having played in two of the first four Super Bowls, including an upset of the heavily favored Minnesota Vikings in Super Bowl IV just two seasons earlier.

45,822 fans crammed into Municipal Stadium on an unseasonably warm Christmas Day in Missouri. Game-time temperature was 62 degrees and skies were partly cloudy when the game kicked off at 3:00 pm and NBC’s top crew of Curt Gowdy [Daily Dose, July 31] and Al DeRogatis broadcast the game which, under blackout rules of that time, was preempted in Kansas City for reruns of “Hee Haw.” Prior to this day, the longest game in pro football history was the 1962 AFL Championship Game, when Stram’s Dallas Texans beat the Houston Oilers, 20-17. Following that game, which lasted 77 minutes and 54 seconds, the Texans moved to Kansas City, became the Chiefs and moved into Municipal Stadium.

Kansas City opened the scoring on a first quarter, 24- yard field goal by All-Pro kicker Jan Stenerud. Halfback Ed Podolak, who was in his third season and had replaced Mike Garrett, who had been traded to San Diego the previous year, scored on a seven yard run to make it 10-0 at the end of the period. In the second quarter, Larry Csonka– Miami’s bruising fullback– scored on a one-yard plunge. After Miami recovered a Podolak fumble deep in K.C. territory, Gary Yepremian kicked 14-yard field goal to even the score at halftime. Kansas City opened the second half with a 15-play, 75-yard drive that took ten minutes off the clock and culminated with a one-yard touchdown run by fullback Jim Otis. Miami responded with a drive of their own and a one-yard run by Jim Kiick to knot the score at 17. K.C. linebacker Jim Lynch thwarted a fourth quarter drive by intercepting a Bob Griese pass on the Chiefs nine yard line, sparking a 91-yard drive by the home team that ended with a three-yard burst by Podolak to make it 24-17, Kansas City. Miami came roaring back, tying the game on a five yard pass from Griese to tight end Marv Fleming with 1:25 left in the fourth quarter. Podolak, who was having the best game of his nine-year NFL career, took Yepremian’s kickoff at the goal line and returned it 78 yards to Miami’s 22 yard line. Following three runs into the middle of the line, Stenrud entered the game with 35 seconds left to attempt a 31-yard field goal to win the game. The normally-reliable Stenerud pushed the chip shot wide right to send the game into overtime. Podolak returned the overtime kickoff to midfield, setting up another field goal chance for Stenerud. The 42-yard attempt was blocked, keeping Miami alive. The game went into a second overtime period after Yepremian missed a 52-yarder and, following a 29-yard dash by Csonka on a play called, “Roll Right, Trap Left,” the left-footer from Cyprus ended a game that had lasted 82 minutes, 40 seconds with a 37-yard field goal, sending Miami to the AFC Championship game to face the defending world-champion Baltimore Colts and the Chiefs home for the Holidays.

The football fortunes of two franchises went in opposite directions as Yepremian’s kick sailed through the uprights to end football’s longest game, as Miami went on to face the Dallas Cowboys in Super Bowl VI just 22 days later. The Dolphins would lose the game but begin their dynasty, as they beat the Washington Redskins in Super Bowl VII to finish the only perfect season [17-0] in NFL history before repeating as Super Bowl champions in 1973. Kansas City did not win another division title until 1993 and has not appeared in a Super Bowl since the 1969 season. Pro football’s longest game featured a dozen future hall of famers, including Dolphins linebacker Nick Buoniconti, who had 20 tackles, and Jan Stenerud, who only made one field goal in four attempts despite being the only pure placekicker ever enshrined into Canton. Podolak finished the game with 350 all-purpose yards [85 rushing, 110 receiving, 153 kick return]–still a NFL playoff record. One of the stipulations of the NFL-AFL merger that began in 1970 was that all stadiums would seat at least 50,000 fans, and Municipal Stadium did not meet that requirement. In the spring of 1972, Ed Podolak ceremoniously pushed the button to start the wrecking ball that demolished Municipal Stadium– and the Chiefs moved into Arrowhead Stadium, which featured a huge electronic scoreboard, synthetic turf playing surface and seating for 78,000 patrons. The Kansas City Chiefs still call Arrowhead their home today. 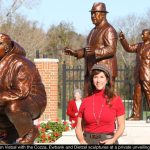