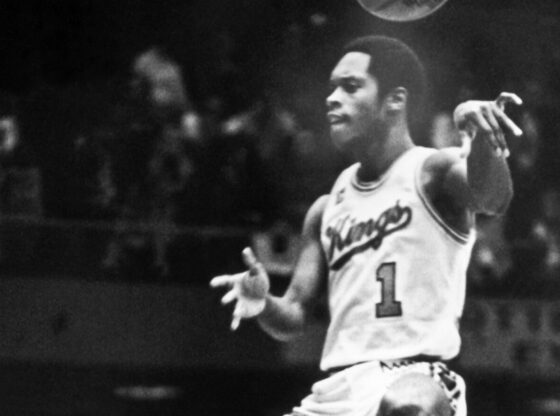 Nate “Tiny” Archibald is the only player in NBA history to lead the league in scoring and assists in the same season.

Shy and diminutive, the mercurial point guard was unstoppable in the lane.  A potent mix of penetration, shooting and passing, Tiny proved the small man had a place in a game dominated by giants.  The consummate floor leader, Archibald was a pinpoint passer who saw the entire court.  A solid midrange shooter, his quickness, speed and shiftiness made him nearly impossible to guard.  Archibald made seven All-Star teams during his 14-year NBA career and was MVP of the 1981 mid-season classic.  The 6’1”, 160 left-hander was named All-NBA First Team three times and won an NBA championship in 1981.  Voted as one of the 50 Greatest Players in NBA history, Archibald was elected to the Naismith Hall of Fame in 1991.

Born September 2, 1948, in the South Bronx, Nathanial Archibald was raised in the Patterson housing projects, one of America’s most ravaged neighborhoods.  He attended DeWitt Clinton High School, alma mater of actor Don Adams of TV’s Get Smart, film legend Burt Lancaster and boxing’s Sugar Ray Robinson.  Archibald failed to make the basketball team as a sophomore and nearly dropped out of high school, but made the squad the following year.  As a senior, he was named All-City.  When poor grades made a college scholarship out of the question, Tiny left The Bronx for the desert.  After playing one year at Western Arizona Community College in Yuma, he landed at the University of Texas-El Paso.  Despite averaging over 20 points per game over three seasons at UTEP, the waif-like playmaker failed to garner much national attention.  That changed quickly after he scored 51 points in the Aloha Classic and averaged nearly 40 per contest in five other postseason showcases.

The 1970 NBA Draft included future hall-of-famers “Pistol” Pete Maravich, Bob Lanier, Dave Cowens and Calvin Murphy.  After choosing Sam Lacey with their first pick, the Cincinnati Royals selected Archibald in the second round [19th overall].  He was also selected by the Dallas Chaparrals of the ABA.  He earned a starting spot as a rookie on a team that went 33-49.  In 1972, the Royals moved to Kansas City and became the Kings in order to avoid confusion with the city’s new baseball team [the franchise shared a market with Omaha until 1975, then moved to Sacramento in 1985].  It was a season for the ages, as Tiny had one of the most amazing years in league history.

In 1974-75, Archibald led the Kings to the franchise’s first winning record since 1966 and inaugural playoff appearance since arriving in Kansas City.  The success was short-lived, as the Kings fell to 31-51 the following year.  Tiny was shipped to the New York Nets in 1976, where a foot injury hampered him for much of the year.  The Nets traded him to the Buffalo Braves but he tore an Achilles tendon in preseason and never played a game for the Braves.  Archibald was dealt to Boston as part of a seven-player deal in 1978.  Not so Tiny after showing up in Boston 20 pounds overweight, Archibald struggled early before rounding back into playing shape.  No longer needing to carry the scoring load, Archibald became the Celtics’ floor leader, teaming with Larry Bird to win the 1981 NBA title.  In 1983, he was traded to the Milwaukee Bucks — his fifth and final NBA franchise —  but appeared in only 46 games before retiring following the season.

Nate Archibald rose from desperate surroundings to extraordinary heights.  He played in 876 NBA games in his 14-year career, averaging 18.8 points and 7.4 assists per contest.  Archibald completed his bachelor’s degree while playing in the NBA, then attended night school at Fordham and obtained his Master’s.  Mr. Archibald became the pride of Patterson, counseling at-risk kids, helping to run community programs and homeless shelters in his boyhood neighborhood.  He has coached with Tim Hardaway at UTEP as well as in the USBL and Developmental League.  In 2002, Archibald accepted a position with the NBA’s community relations department.