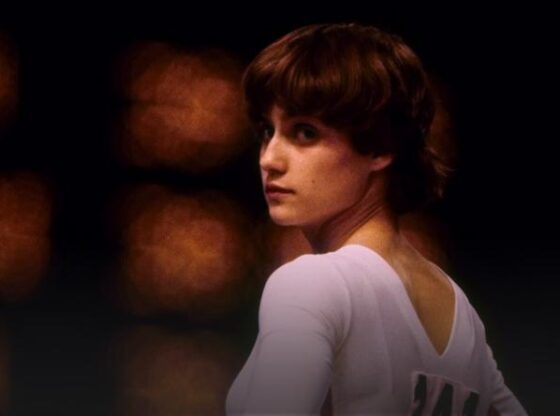 Born in Onesti, Romania—a factory town in the Carpathian Mountains—November 12, 1961, Nadia Elena Comaneci is the older of two children who lived with their parents in a small apartment.  Her mother, Alexandria, worked in a local factory and her father Gheorghe was an auto mechanic.  Nadia was active as a child.  “I had a lot of energy, and my mom decided to look for a place where I can spend the energy,” Comaneci recalled, “because I was jumping on the couch and furniture and things in the house.”  She began gymnastics in kindergarten, where she was discovered by Bela Karolyi—who would later become the Romanian national coach–while turning cartwheels in the schoolyard.  The stern Karolyi, a former junior boxing champion and member of the 1956 Hungarian Olympic hammer throwing team, invited the six-year-old Comaneci to attend his experimental gymnastics school.  Comaneci trained four hours a day, six days a week—with Sunday being her only day off.  At seven, she placed 13th at the Romanian Junior Gymnastics Championships.  She returned one year later and placed first.  In 1971, Comaneci made the Romanian National Team, winning two gold medals at the Friendship Cup meet in Bulgaria.  The following year, she captured her third straight national junior championship and three more golds at the Friendship Cup.  Miss Comaneci entered the 1975 European Championships at 13.  She won one silver and four gold medals, including the all-around, becoming the youngest champion in the history of that discipline.  In early 1976, she took the all-around title at the inaugural American Cup meet in New York City’s Madison Square Garden [Daily Dose, December 15].

The Omega Company is a Swiss manufacturer of electronic scoreboards and has been making and installing scoring and timing systems for the Olympics since 1932.  Prior to the 1976 Summer Games in Montreal, Omega asked whether to install a three-digit or four-digit scoreboard for the gymnastics competition at the Montreal Forum.  They were directed to install a three-digit clock, as “a 10.00 is not possible.”  Nadia Comaneci was entered in four disciplines during the Olympic meet.  The first was the uneven bars, where during the team compulsory portion of the competition, it appeared to one judge that the 4’1”, 86 pound Romanian was “swimming in an ocean of air” during a flawless performance.  Upon dismount, the Omega scoreboard read 1.00—sending Romanian coach Bela Karolyi into a rage—before one of the judges calmed him by holding up ten fingers.  Comaneci had earned a 10.00, the first perfect score in Olympic gymnastics history.  It was the first of seven perfect scores she would receive en route to claiming gold medals in bars, beam and all-around.  In addition, the 14-year-old Comaneci took bronze on the floor exercise and earned silver in the team competition.  In a single week, Miss Comaneci graced the covers of Newsweek, Sports Illustrated, and Time, the latter proclaiming “She’s Perfect!” on its cover.  She was an international sensation; BBC named her “Sports Personality of the Year,”  AP awarded her “Female Athlete of the Year,” and she earned her second straight “Female Athlete of the Year” title from UPI.  After earning two gold medals at the 1977 European Championships and three more at that meet in 1979—including the all-around—Miss Comaneci entered the 1980 Moscow Olympics four inches taller and 20 pounds heavier than she had been in Montreal.  Despite suffering from sciatica, she successfully defended her Olympic title on the balance beam, tied for the gold medal in the floor exercise and placed, second by a narrow margin, to Russia’s Yelena Davydova in the all-around.  She retired from competition in 1981 after capturing five gold medals at the Summer Universiade Games.

In 1972, Russian Ogla Korbut had thrust gymnastics out of the Olympic shadows; in 1976, Nadia Comaneci stepped into that spotlight and created a legend.  She redefined her sport and audiences’ expectations of female athletes.  Following her Olympic glory, she was awarded the “Sickle and Hammer Gold Medal” and named “Hero of Socialist Labor” in Romania.  A few years later, she was forbidden from leaving the country.  “Life…” she wrote in her autobiography, “…took on a new bleakness.”  After helping coach the Romanian gymnastics team, Comaneci defected Romania in November 1989, leaving behind her parents and younger brother.  She settled in Montreal before marrying former American gymnast Bart Conner,, whom she had met for the first time at the 1976 American Cup.  They married in 1996 and now reside in Norman, Oklahoma.  Nadia Comaneci received the Olympic Order in 1984 and 2004, making her the youngest winner and only two-time recipient of the highest award given by the IOC.  Bela Karoyli, who later coached—among others–American gold medal winners Mary Lou Retton and Kerri Strug, said of Comaneci, “She has three qualities.  The physical qualities of strength, speed and agility.  The intellectual qualities of intelligence and concentration.  And above everything, Nadia has courage.”  Nadia Comaneci was named as one of the Athletes of the Century by the Laureous World Sports Academy in 2000 and was inducted into the International Gymnastics Hall of Fame in 1993.

On this day in 1976, Nadia Comaneci earned a perfect score of 10.00 following her performance on the uneven bars in the Summer Olympics in Montreal.  It was the first time in modern Olympic gymnastics history that the score had ever been awarded.
View here: https://youtu.be/Yi_5xbd5xdE