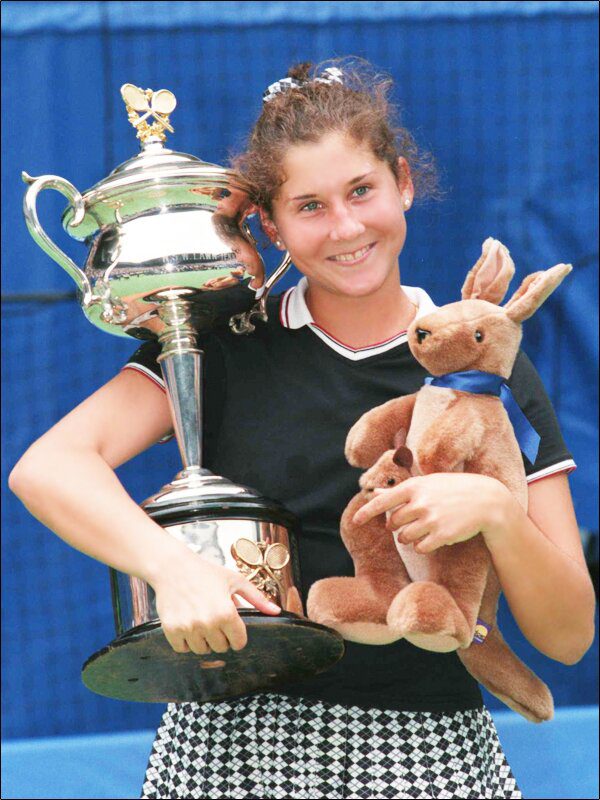 Monica Seles is the greatest teenage tennis player in history.

Born in Novi Sad, Yugoslavia [current-day Serbia] December 2, 1973, she is the younger of two children born to Hungarian parents Karolj, a professional cartoonist, and Eszter, a homemaker.  Karolj was an avid tennis player, teaching the game to his children in the parking lot of their apartment complex, as Novi Sad only had four clay courts.  Monica began playing at five, aspiring to beat her brother Zoltan, who was eight years older and the top-ranked junior player in the world.  At eight, she was the best player in Yugoslavia and by ten was the number one junior player in the world.  In 1985, Seles [SELL-ess] was spotted by tennis coach Nick Bolletteri while playing in a tournament in Florida.  The following year, he offered her a scholarship to attend his well-respected tennis academy and Seles moved to Bradenton, Florida.  After rising to become the top-ranked junior player in the world, Seles entered her first professional tournament in March 1988 as a 14-year-old amateur.  She won her first match, went 5-3 on the year, and decided after the season to play professionally.

Monica Seles turned pro February 13, 1989.  Eleven weeks later, she beat Hall of Famer Chris Evert [Daily Dose, December 23] for her first win, at the Virginia Slims of Houston.  Seles won 8 times in 1990, including the French Open, where she beat top-ranked Steffi Graf [Daily Dose, October 2] in straight sets to become, at 16, the youngest winner in the event’s history.  In 1991, the 5’10”, 135 pound left-hander completely dominated women’s tennis, winning all three of the Grand Slam events she entered [Seles did not play Wimbledon due to injury] and 33 tournaments worldwide while rising to World No. 1.  Seles was equally dominant the following year, defending her three Grand Slam singles titles while retaining her number-one ranking.  In her first four years as a pro, she had won 90 percent of her matches and collected 30 titles. In January 1993, Monica Seles won her third straight Australian Open, beating Graf in the final.  Three months later, her life would be changed forever when an obsessed Graf fan stabbed Seles behind her left shoulder blade during a break between games of a match in Hamburg, Germany.  Seles was rushed to a hospital and her injuries healed quickly but her mind did not, as she suffered severe emotional trauma and did not return to competitive tennis for more than two years.  In August 1995, Seles won her first comeback tournament, the Canadian Open, and was reinstated by the WTA—the governing body of tennis–as joint number-one player in the world, alongside Graf.  Seles won her eighth and final Grand Slam title at the Australian Open the following year before injuries and personal issues kept her away from the game.

At the height of her career, Monica Seles was virtually unbeatable. In 1990, she went on a 36-match winning streak and won six consecutive tournaments.   Between January 1991 and February 1993, she won 33 of the 34 tournaments she entered.  Miss Seles played in eleven Grand Slam singles finals from 1990 to 1993 and won eight of them.  Seles turned pro at 15.  Three months later, she beat Chris Evert and was the top-ranked player in the world 25 months after joining the Tour.  She broke into the World Top Ten in her first nine months as a pro, going 33-8 to finish her rookie campaign ranked sixth in the world.  She is the youngest winner in French Open history [16] and won eight Grand Slam titles before her 20th birthday, giving her the record for most Grand Slam singles titles won as a teenager in the Open Era.  Seles has the longest win streak in Australian Open history [33-0] and is the first female tennis player to win her first six Grand Slam singles finals.  Although she did win the Australian Open in 1996 and Olympic bronze medal in Sydney in 2000, she suffered Post-Traumatic Stress Disorder following her stabbing and never returned to form.  Seles was 595-122 [82.98%] in singles matches and won 53 career titles, totals that would have been significantly higher had she not been struck down at the height of her career.  She played in her last professional match at the 2003 French Open but did not officially retire until February 2008.  Monica Seles was inducted into the International Tennis Hall of Fame in 2009 and was listed as the 13th greatest player of all time by Tennis magazine.

On this date in 1991, Monica Seles became the youngest player in history to become World No. 1, overtaking Steffi Graf.  Seles was 17 years, 9 months old.

“Yet, transformed from champion to tragedienne, Seles became far more popular than she was while winning all those titles.  It became impossible to root against her…when she quietly announced her retirement, she exited as perhaps the most adored figure in sport’s history.”
– Jon Wertheim of Sports Illustrated