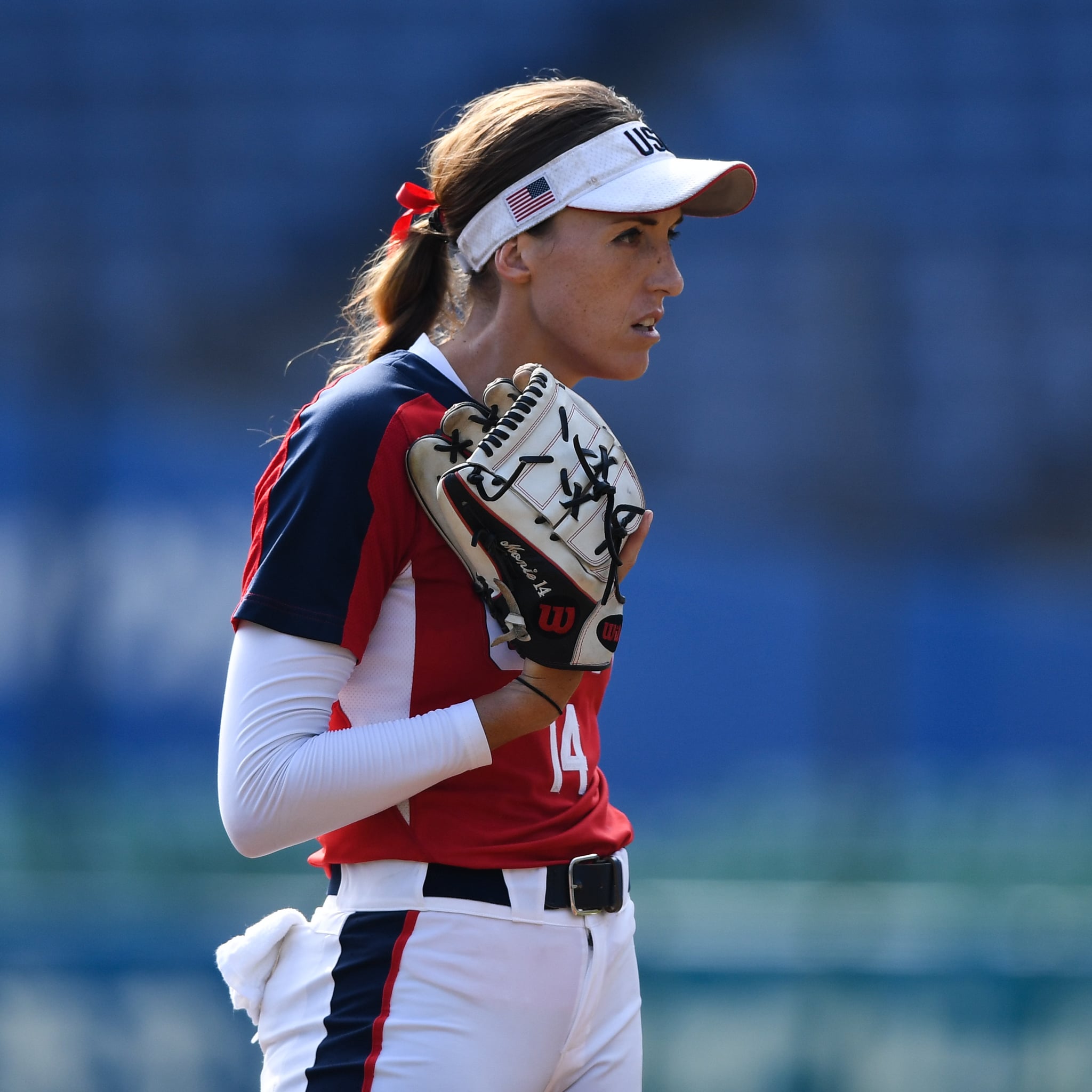 Happy 32nd birthday to the most feared pitcher in women’s softball history.

Monica Abbott is the most dominant pitcher in softball history.  The 6’3” left-hander features a variety of pitches that keep hitters off guard.  Her fastball is untouchable.  Throwing from 43 feet away, Abbott’s rising heater reaches over 75 mph, which is the equivalent of 107 for a baseball pitcher.  Nobody, including the great Nolan Ryan, ever threw that hard.  During her four seasons at Tennessee, Abbott went 189-32 and posted an ERA of 0.79.  She threw 23 career no-hitters and six perfect games [Ryan threw a record seven no-hitters and no perfect games in his brilliant 27-year career].  Abbott hurled 112 shutouts and struck out 2,440 batters.  As a senior, she set the Division I record for most strikeouts in a season and became college softball’s all-time leader in wins, strikeouts, shutouts, innings pitched and games pitched.
The powerful portsider led Division I in wins all four years at UT.  She struck out 20 of 21 batters in a single game her freshman year and recorded at least 17 strikeouts [college plays seven-inning games] six times.  B.A. [Before Abbott], no pitcher in college history had ever won 50 games in a season.  Monica did it twice.  The four-time All-American was named 2007 College Player of the Year and earned the 2007 Honda Award as the nation’s top college softball athlete.

Born in Santa Cruz, California, on this date in 1985, Monica Cecilia Abbott is the second of Bruce and Julie’s five children.  She attended North Salinas High School, located about 45 miles south of the world-famous Mavericks surfing mecca, where she became the most decorated athlete in school history.  Abbott was a four-time team MVP and was voted All-League, All-County, and All-Section in each of her four seasons at North Salinas.  Following her senior season, the two-time California Player of the Year accepted a scholarship to the University of Tennessee.

When Monica Abbott arrived in Knoxville in 2003, only two pitchers in NCAA  history had ever struck out 500 batters in a season.  Monica – who was voted SEC Freshman of the Year and three-time SEC Pitcher of the Year — did it four straight years.  As a sophomore, she recorded 603 strikeouts.  In her senior year, she whiffed an unfathomable 724.  Pre-Abbott, the Lady Volunteers had appeared in one NCAA tournament and had never reached the College World Series.  In her four seasons at UT, Monica led the Lady Vols to four straight NCAA tournaments and three College World Series.  She was named to the CWS All-Tournament Team in each of her three appearances.  As a senior in 2007, she guided UT to its first SEC title and a berth in the CWS championship, where they lost to top-ranked Arizona in the best-of-three series final.

Abbott enjoyed tremendous success internationally between 2005 and 2010.  She led Team USA to four World Cup of Softball championships, three Canada Cup titles, and gold medals at both the 2006 and 2010 ISF Women’s World Championships.  Abbott pitched the United States to a gold medal at the 2007 Pan Am Games in Rio and threw the first perfect game in Olympic history, against The Netherlands in the 2008 Beijing Games.

National Pro Fastpitch [NPF] is the only professional women’s softball league in the United States.  Founded in 2004, the NPF currently features six teams, including a club in Beijing.  Now in its 14th year, the NPF plays a 50-game regular season, followed by a post-season tournament in which teams vie for the coveted Cowles Cup.  Women’s professional softball players earn most of their income competing in Japan.  In 2010, Abbott joined the Japan league.  In her first season abroad, she led the circuit in strikeouts, ERA and was named league MVP while leading her Toyota Motor Company team to the Japan Softball League title.  She pitched a perfect game in the final, then threw a no-hitter in the championship game the following year to lead Toyota to back-to-back titles.  Abbott played with the NPF Tennessee Diamonds in 2010 and was with the Chicago Bandits from 2011 to 2015.  She has won three NPF championships in her seven seasons in the league.

Monica Abbott is the most valuable softball player in the world.  Not arguably the best pitcher in the sport, she is empirically the best.  And it’s not close.  Abbott went 13-1 with an infinitesimal 0.31 ERA in 2015.  In softball and baseball, walks plus hits per innings pitched [WHIP] is a sabermetric that reflects a pitcher’s propensity for allowing batters to reach base.  New York Yankee closer Mariano Rivera has the lowest WHIP [1.00] among pitchers in the live-ball era [post 1920].  In 2015, Monica posted a 0.59 WHIP while recording 149 strikeouts in 90 innings of work for the Chicago Bandits.

Nolan Ryan was baseball’s first million-dollar player.  In May 2016, Monica Abbott signed the first million-dollar contract in softball history, inking a six-year deal with the NPF’s expansion Houston Scrap Yard Dogs.  In a league where few players earn five-figure incomes and 18-woman rosters must fit within a $ 150,000 salary cap, Abbott’s contract is jaw-dropping.  College softball has never been more popular, drawing record crowds and strong television ratings, but with the Olympics dropping softball [the sport was last played at the 2008 Beijing Games but will return in 2020], the post-college game has struggled to gain a foothold.  The NPF hopes Monica Abbott will do for their league what Joe Namath did for the American Football League in the 1960s – save it from extinction.