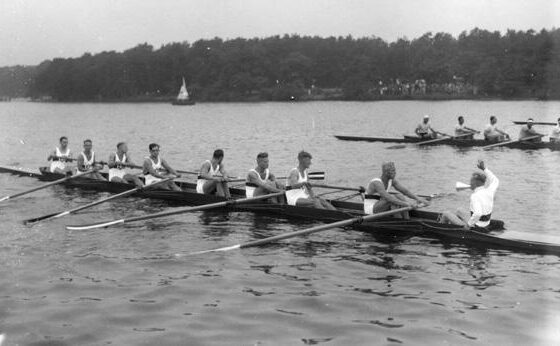 The 1936 Olympic Games in Berlin are best remembered for Jesse Owens’ four gold medals in track and field.  The lesser known story is that of nine American rowers.

In the summer of 1936, the world was on the verge of war.  Just three years before Nazi dictator Adolph Hitler invaded Poland and set off World War II, Germany hosted the tenth modern Olympiad.  Berlin had been awarded the 1916 Summer Games but the event was cancelled due to World War I.  Two decades later, the Olympics returned to Germany’s capital city, and Hitler intended these Olympics to be a showcase for German supremacy and his Aryan Nation.

A couple hundred boys showed up on the banks of Seattle’s Lake Washington to try out for the University of Washington’s rowing team in 1936.  Hard-driving coach Al Ulbrickson was seeking to return the program to prominence, as the Huskies had won three national titles in the 1920s.  The stoic Ulbrickson combed the Pacific Northwest for talent, regularly attending high school basketball and volleyball games looking for rugged, determined personalities that he could mold into rowers.  What he coveted most were competitors with a strong work ethic; what he found was a collection of eight varsity rowers and a coxswain that would compete in the greatest boat race in American history.  The rowing powerhouses of the day included Penn, Cornell and Cal.  These teams were made up of the privileged—sons of bankers and lawyers.  Conversely, Ulbrickson’s team was made up of Westerners, the sons of farmers, loggers, fisherman and shipyard workers.  Steeled by the Great Depression, the Huskies were no strangers to hard work.  Many swept floors after basketball games, sold tickets or ushered to earn lunch money, while others spent summer weeks building the mammoth Grand Coulee Dam on the Columbia River in Eastern Washington.  They formed a comradery, with strong trust and determination, after spending long hours on Lake Washington in a shell—designed and built by the legendary George Pocock—dubbed Husky Clipper.  Roger Morris was the bowman, Gordon Adam rowed in the third seat, Jim “Stub” McMillan sat in the five seat and Donald Hume set the pace.  Chuck Day, George “Shorty” Hunt, John White and sophomore Joe Rantz—a former high school gymnast and last man to make the team—rounded out the eight-man crew.  Robert Moch served as coxswain.  All of the boys were from Western Washington, and none had rowed until arriving at UW.

In June 1936, the Husky varsity eight arrived in Poughkeepsie, New York, for the collegiate championships.  Competitors included archrival Cal—who had won the last three titles in a row along with the last two Olympic championships–Navy, Penn and Cornell.  Following a slow start, the Huskies’ shell glided over the Hudson River to collect Ulbrickson’s first college title.  From Poughkeepsie, the men travelled to Princeton, New Jersey, where two weeks later they rowed to victory over Cal, Penn and the New York Athletic Club crews in the Olympic Trials.  For the first time in history, a team from the West would be representing the U.S. in the Olympics. Or not.  Days after the victory in Princeton, the USOC told the team it could not afford to pay for their trip to Germany and they had one week to come up with $ 5,000 to cover the costs or the Committee would send second-place Penn.  Within two days, the folks back home had raised the cash and locked down the berth.  After loading the Husky Clipper onto the steamship S.S. Manhattan, the men set out for the eight day trip to Germany.

On the Olympic Stadium track in August 1936, the American men won the 100, 200, 400, 800, one relay race, two hurdles events, the high jump, pole vault and decathlon.  The German oarsman, however, dominated in the water, capturing five gold and one silver medal in the six races preceding the eight oared final.  The rowing competition took place on Lake Grunau, 20 miles south of Berlin.  On August 14, over 70,000 people—including the Nazi dictator—lined the 2,000 meter-long course, while another 300 million listened on global radio.  The Germans were in Lane One, the Italians started in Lane Three and the U.S. team was in Lane Six.  At six o’clock on a blustery evening, the Americans—furthest away, with the wind blowing and crowd cheering—missed the starting signal.  Notoriously slow starters, the U.S. shell was dead last at the halfway mark.  Led by Hume, who had taken ill during the Atlantic crossing, the college kids zoomed to 44 strokes per minute, faster than they had ever rowed.  Knifing through rough water, the Husky Clipper caught the Germans then passed the stunned Italians in the race’s final ten strokes.  As they crossed the line together, the rowers couldn’t tell who had won.  “Nobody said a word,” Moch recalled.  “God, we were out of gas at the end,” McMillan remembered. “How I struggled through that last 20 [strokes] I don’t know.”  The Huskies had stolen gold from Hitler, finishing in 6:25.4 to set a new Olympic and world record.  USA finished six-tenths of a second ahead of Italy—less than the length of an oar—and one second clear of the Germans.

Jesse Owens made headlines by defeating the vaunted German athletes in front of Adolph Hitler.  Improbably, nine athletes from UW did the same in a rowing competition.  It was Chariots of Fire with oars.  Bill Henry, who called the race for CBS Radio, said the event was, “The outstanding victory of the Olympic Games.”  Legendary sportswriter Grantland Rice called it the “high spot” of the Summer Games and Jim McMillan later called the medal ceremony inside Berlin’s Olympic Stadium the most emotional moment of his life.  The American team was inducted into the USA National Rowing Hall of Fame in 1970 and the University of Washington’s Husky Hall of Fame in 1979.  Three members lived into their 90s.  The first of the Huskies to cross the Olympic finish line, bowman Roger Morris, was the last to die.  He passed away in 2009.  The 1936 Varsity Eight Olympic final was voted Seattle’s greatest sports moment of the 20th century.