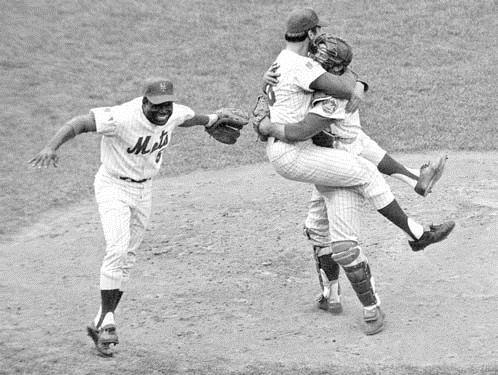 New York dominated Baltimore in sports in 1969.  In January, Joe Namath and the Jets stunned the Colts in Super Bowl III.  In late spring, the Knicks swept the Bullets in the first round of the NBA playoffs.  And as summer gave way to fall, the Mets pulled off a miracle over the Orioles.

The New York Metropolitans began in 1962 as part of the National League’s first expansion of the 20th century, joining the Houston Colt .45s as the NL’s ninth and tenth teams.  The club set a record for futility in their inaugural season, losing a still-MLB record 120 games under former Yankees manager Casey Stengel, who was hired out of retirement.  The Mets were the laughingstock of baseball for much of the 1960s, losing an average of 108 games in their first six seasons.  Determined to shed their image as loveable losers as the decade wore on, General Manager Johnny Murphy engineered a series of moves aimed at making the Mets competitive.

In November 1967, Murphy traded pitcher Bill Denehy and $100,000 to the Washington Senators in exchange for manager Gil Hodges, who was a New York baseball legend with the Brooklyn Dodgers of the 1950s.  Murphy brought in a new wave of young talent.  He built a dominant pitching staff, drafting Nolan Ryan, Tom Seaver, Jerry Koosman and Tug McGraw.  The Mets added shortstop Bud Harrelson and obtained catcher Jerry Grote and outfielder Tommie Agee in trades.  Under Hodges, the 1968 team finished 73-89 and climbed out of the cellar for the first time since joining the NL.

The National League went to a divisional format when the San Diego Padres and Montreal Expos joined the circuit as expansion teams in 1969.  The Mets were part of the six-team NL East that season, where many expected them to finish last.  They lost their home opener to Montreal, 11-10.  New York entered June below .500, then quietly reeled off 11 straight wins.  Not many noticed, as all eyes were on Leo Durocher’s front-running Chicago Cubs.  Led by Ernie Banks, Ron Santo, Billy Williams and Fergie Jenkins, the Cubs appeared to be the class of the league.  By mid-August, Chicago held a commanding 9 ½ game lead on the Mets.

In late summer, the Mets went on a tear, winning 38 of their final 49 games, including two over the Cubs in early September, to ignite a ten-game win streak and overtake Chicago.  New York won both ends of a September 12 doubleheader against the Pittsburgh Pirates, 1-0.  Three days later, St. Louis Cardinals left-hander Steve Carlton struck out 19 Mets – a major league record – but New York still beat him, 4-3.  As the Amazin’ Mets rolled, the Cubbies choked, going 16-25 down the stretch to finish eight games back of New York.  The Mets clinched the NL East in their final home game before finishing the regular season with a week-long road trip.  They won their 100th game of the campaign on the next-to-last day of the season, over the Cubs at Wrigley Field.

Employing a heavily-platooned lineup, the Mets finished 100-62.  Eleven players appeared in 100 or more games, but only two – outfielders Cleon Jones and Agee – played in over 125.  Pitching was the strength of the team.  Seaver – dubbed Tom Terrific – won his last ten decisions to finish 25-7 with a 2.21 ERA.  The left-handed Koosman won his last five games to end the year at 17-9, and the bullpen was anchored by McGraw and Ron Taylor.  Nolan Ryan, a 22-year-old fireballer from Texas, won six of nine decisions while striking out 92 batters in 89 innings.

The Mets’ opponent in the first-ever National League Championship Series were the Atlanta Braves.  New York had won eight of 12 over Atlanta during the regular season, but the Braves came into the series red-hot.  Atlanta took 17 of their last 21 games to edge the San Francisco Giants for the NL West title.  The Mets put on a power display in the NLCS, hitting .327 with six homers to sweep the Braves.  The New Yorkers scored 27 runs in three games to become the first National League team from Gotham to earn a trip to the World Series since the 1956 Brooklyn Dodgers.

The Mets faced the Baltimore Orioles in the World Series.  Under second-year skipper Earl Weaver, the Orioles were a juggernaut.  The Birds won a big league-best 109 games to outpace the Detroit Tigers by a whopping 19 games in the AL East.  Led by sluggers Frank Robinson and Boog Powell, Baltimore swept the Minnesota Twins in the ALCS.  The O’s featured one of the greatest pitching staffs in baseball history.  Starters Dave McNally, Mike Cuellar and Jim Palmer combined for 59 wins while pitching 740 innings during the regular season.

The World Series opened at Memorial Stadium in Baltimore, where 50,000 fans saw Orioles left-fielder Don Buford send Tom Seaver’s second pitch of the game over the wall to pace a 4-1 Birds victory.  With their ace unavailable until Game 4, things looked bleak for New York.  But in Game 2, Jerry Koosman held Baltimore in check to win, 2-1.  Tommie Agee was the story in Game 3.  The fleet centerfielder led off the game for the Mets with a home run off Palmer, then saved at least five runs with his defense in a 5-0 Mets victory.  Seaver was sensational in Game 4, going the distance in a tense affair, won by New York when Baltimore committed a throwing error in the bottom of the tenth inning.

In Game 5, Baltimore jumped out to a 3-0 lead.  The Mets tied it in the seventh when light-hitting Al Weis — who hit only seven home runs in 800 big league games – took McNally deep to ignite the Shea Stadium crowd.  Thanks to two Baltimore errors, the Mets tacked on two more in the bottom of the eighth to make it 5-3.  In the ninth, Koosman retired Robinson, Powell and Davey Johnson in order, blindsiding the Orioles while capturing the ’69 World Series in five games.  Weis batted a Series-best .455 with three RBI, while Mets first baseman Donn Clendenon, who belted three homers, was named World Series MVP.

The 1969 Miracle Mets gave New York the first winning season in franchise history while helping heal the pain of the Giants and Dodgers migration to the West Coast in 1958.  In only their eighth year of existence, the Metropolitans became the first expansion team to win a division title, pennant and the World Series.  In their sixth season playing at Shea Stadium in Queens [the team played in the dilapidated Polo Grounds in 1962 and 1963], the Mets led the National League in attendance, drawing over two million fans, who witnessed one of baseball’s most rapid and dramatic turnarounds.

On this date in 1969, the Mets beat the St. Louis Cardinals, 6-0, to clinch the NL East division title.  Right-hander Gary Gentry went the distance for New York, allowing just four hits in nine innings of work.