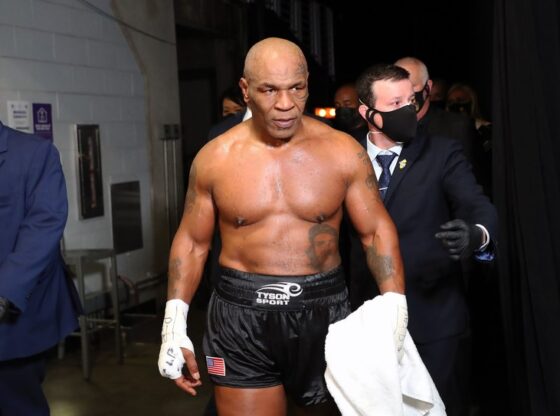 Michael Gerard Tyson was born in Brooklyn, New York on this date in 1966.  He won the gold medal in the Junior Olympics as a heavyweight in 1981 and 1982 and was National Golden Gloves heavyweight champion in 1984.  Tyson once knocked an opponent out in 8 seconds, the quickest KO in Junior Olympic history.   He made his professional debut in March of 1985 with a TKO of Hector Mercedes and was voted Ring magazine’s “Prospect of the Year” later that year.  He won 26 of his first 28 bouts by knockout; 16 of them in the first round, and fought 18 times in his first year as a professional.

He became WBC champion by beating Trevor Berbick by TKO in two rounds in 1986 to become the youngest heavyweight champion in history at age 20.  Less than four months later, he won the WBA belt and the IBF title came five months after that.  In boxing, a lineal champion is “the man who beat the man who beat the man” and, in 1988, Michael Spinks was considered the lineal champion for having beaten Larry Holmes for the Ring title.  Spinks was 31-0 and Tyson 34-0.  “Iron Mike” hit Spinks eight times and knocked him out in 91 seconds, the sixth shortest heavyweight title fight in history, to become the undisputed champion.  Spinks would never fight professionally again.

“Kid Dynamite” successfully defended his title nine times but lost the heavyweight title to James “Buster” Douglas in February of 1990 in what is one of the most shocking upsets in sports history.  Douglas lost to Evander Holyfield in his first title defense later that year and Tyson was arrested one year later for rape.  He was convicted in 1992 and sentenced to six years in prison but was released after three years.  He resumed his boxing career and easily won his first two comeback bouts before beating Frank Bruno for the WBC title in March of 1996.  He regained the WBA belt six months later and faced Evander Holyfield in November of that year.  Holyfield won by TKO in the 11th round and the two fought in a rematch 7 months later, when Tyson was disqualified at the end of three rounds for biting both of Holyfield’s ears.

“The Baddest Man on the Planet” would never be champion again.  Of his final 12 bouts, he lost 5 and had two end in “no decision”.

Mike Tyson finished his career 50-6-2, 44 by KO.  He was voted Fighter of the Year by Ring magazine in 1986 and 1988 and was elected to the International Boxing and World Boxing Halls of Fame.  in 2010, ESPN.com rated him first on its list of “Hardest Hitters in Heavyweight History.”