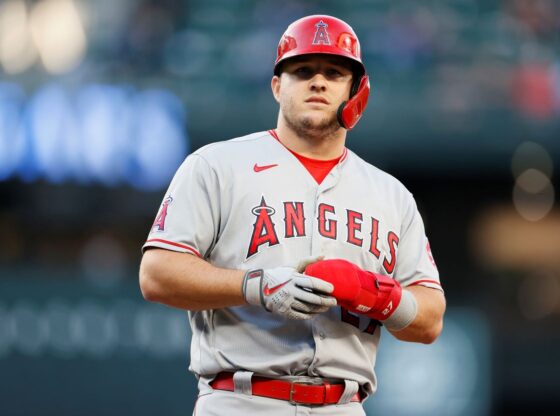 Mantle was known as The Commerce Comet.  Trout has been dubbed The Millville Meteor.

In 2009, 21 teams inexplicably passed on drafting the most transcendent talent Major League Baseball has seen since Mickey Mantle in the early 1950s.  Like The Mick, Trout exploded onto the big league stage with blistering speed and prodigious power that made major league parks look small.

Michael Nelson Trout is the best baseball player in the world, and has been since he broke into the big leagues in 2012.

The biggest fish in the sport’s largest pond, Trout is the quietest superstar in sports.  The New York Times called him, “baseball’s best, without the brand.”

Trout keeps a low profile.  Unlike Javy Baez of the Chicago Cubs, he does not take the field dressed like Mr. T, doesn’t call out reporters like Bryce Harper, and avoids getting into Twitter fights like Curt Schilling.

Like his idol, Derek Jeter, Trout stays out of the limelight.  “He does it the right way every single day,” says Harper, who shared an outfield with Trout for the Scottsdale Scorpions in the Arizona Fall League in 2011.  “He’s one of the best in the game at being himself and never changing.”

An argument can be made that Trout has had the greatest season ever, for a player his age, in each of his first six seasons in the league.

In his first season, “The Kiiiid” was named Rookie of the Year.  In his third and fifth campaigns, he earned AL MVP honors.  In every year has not won MVP, the Millville Meteor has finished second.

Wins Above Replacement [WAR] is a baseball statistic that measures a player’s total contributions to his team.  A player’s WAR value is the number of additional wins his team gains over the contribution that would be made by a replacement-level player.

Over the course of the 2017 season, Trout passed 30 Hall of Famers in WAR, and his 1.071 OPS [on-base plus slugging percentage] was the best in the majors.  Just 26, he has already put up more value than Sandy Koufax, Lou Brock, and Whitey Ford did over their entire careers.

Trout has made the All-Star team in each of his six seasons and won the Silver Slugger Award as the best hitter at his position in five of them.  He has led the AL in each of the following offensive categories at least once:  OPS, walks, extra-base hits, RBI, runs, slugging, stolen bases, on-base percentage, and total bases.

Why is the best player in our national pastime not as well-known as Lebron, Tom Brady or Steph Curry?  Is it because he is on a team full of past-prime stars and fill-ins?  That he plays in a sterile ballpark only a stone’s throw from Disneyland?  Or that the Angels have been in only one playoff series [2014 ALDS] in Trout’s six seasons?

All are likely contributing factors, as is the fact that Angels’ home games start when half the country is getting ready for bed.  The anti-Peyton Manning, the humble Trout limits his media exposure and endorsements.

Born in Vineland, New Jersey, August 7, 1991, Michael is the youngest of Jeff and Debbie’s three children.  Jeff Trout played in the Twins farm system after being drafted by Minnesota in the fifth round out of the University of Delaware before becoming a high school football coach.

At Millville High School, Trout was an All-Conference basketball player and played quarterback and safety in football.  A shortstop and pitcher, he threw a no-hitter against Egg Harbor Township his junior year before switching to center field as a senior.

A two-time All-Stater, Trout was named New Jersey Player of the Year in 2009.

After blasting a record-18 homers as a senior, the 6’2”, 235-pound right-hander accepted a scholarship to East Carolina University.  In June 2009, the Los Angeles Angels drafted Trout with the 25th overall pick of the MLB draft –eight spots behind A.J. Pollock – and he turned pro.

Angels scout Greg Morhardt, who played in the minors with Trout’s father, claimed Mike was the fastest and strongest 17-year-old he had ever seen.

Before the 2010 season, Baseball America rated Trout the 85th-best prospect in the minor leagues.  By July, the esteemed publication upgraded him to second-best.  After the 2010 season, the 19-year-old Trout was named Minor League Player of the Year, the youngest recipient in history.

Mike Trout made his major league debut in July 2011, playing 40 games for the Angels.  He also played 91 games for the Double-A Arkansas Travelers in the Texas League, where he was again named Minor League Player of the Year.

The consummate five-tool player, Trout became the Angels’ everyday center fielder in 2012.  Displaying offense, defense and speed not seen since Mantle, he took the major leagues by storm, earning a spot on the All-Star team, leading the league in stolen bases, and being named 2012 Rookie of the Year.

The last player a pitcher wants to see at the plate, Mike Trout can beat you in so many ways.  With a rare blend of power and patience, he gets on, gets over and gets in.  In nearly 3,400 big league at-bats, Trout has already amassed 1,040 hits, belted 201 homers, and driven in 569 runs.

Trout takes over games with his offense, defense and speed.  Like Mantle, he blasts gargantuan home runs.  Like Griffey he scales outfield walls to rob opponents of extra-base hits.  Like Mays he seems to chase down every ball hit to center field.

If he stays healthy, Mike Trout may well end up being the greatest all-around baseball player in history.  In 2017, he became the first player in history to finish in the top two in MVP voting for the sixth straight season.

Wake up and pay attention, America.  Mickey Mantle is alive and well.  The greatest talent in a generation is playing center field in Anaheim and many of you are missing it. 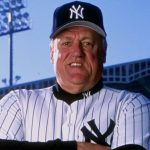 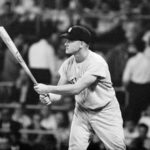 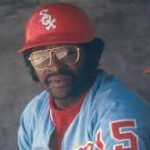