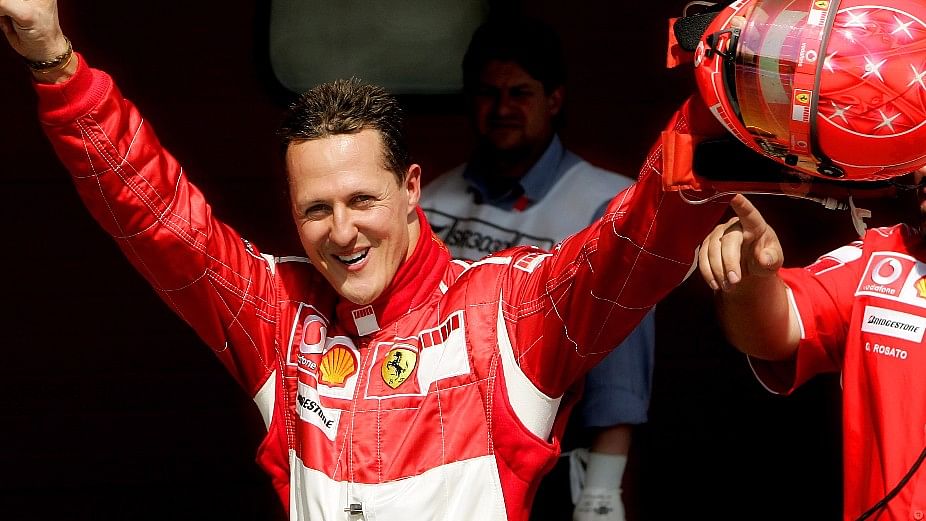 Michael Schumacher is, statistically, the greatest driver the sport of Formula One has ever seen.

Formula One, also known as F1, is the highest class of single-seat auto racing in the world.  An F1 race—also known as a Grand Prix—is an event that takes place over three days [usually Friday to Sunday], with a series of practice and qualifying sessions occurring on Friday and Saturday.  The race is generally held on Sunday afternoon.  Points are awarded to drivers and teams based on finishing position.  The team earning the most points over the course of the season is deemed champion.  Due to extremely high cornering speeds and tremendous aerodynamic downforce, Formula One cars are the fastest road course racing machines in the world.  Traditionally based in Europe, which hosts about half of each year’s races, F1 has expanded significantly and an increasing number of Grand Prix are held on other continents.  The 2014 season attracted over 425 million television viewers throughout the world.

Born in Hurth, a small town in western Germany about 50 miles from Belgium, January 3, 1969, Michael is the eldest of Rolf and Elisabeth Schumacher’s three sons.  As a child, he showed an interest in racing, so his bricklayer father built young Michael his own kart.  Schumacher entered and won several karting races.  At 13, he won the German Junior Kart Championship.  The following year, he earned his driver license.  Schumacher raced in entry-level championships on the F3 circuit and won the 1988 Formula Konig event.  He made his Formula One debut at the 1991 Belgian Grand Prix, which he did not finish due to a clutch problem.  The following year, he won the event to collect the first of 91 career Grand Prix wins.

Schumacher claimed his first F1 world title in 1994 before repeating as champion the following year.  Between 2000 and 2004, he won five straight F1 season championships while never winning fewer than six races in any of those campaigns.

Noted motor sports author Christopher Hilton observed in 2003 that a “measure of a driver’s capabilities is his performance in wet races, because the most delicate car control and sensitively are needed.”  Through the end of the 2003 season, “Regenkonig”—German for “Rain King,”–won 17 of 30 wet races in which he had competed.  Committed to fitness and preparation, Schumacher was relentless.  He would not leave a track until he was absolutely sure he had left no stone unturned.  Schumacher’s capacity for concentration was unmatched.  While being interviewed by a German journalist during a testing day, Schumacher was interrupted midway through an answer by a team engineer, who asked him to run three laps immediately to correct a mechanical issue they were working on.  He got up, completed the laps, and came back five minutes later to finish the sentence.  Even the interviewer did not recall what question she had asked.

Nicknamed “Red Baron” because of his red Ferrari and in reference to Manfred von Richthofen, the great German World War I flying ace, Schumacher helped popularize F1 in Germany, where it was a fringe sport.  His sixth World Championship title in 2003 beat Juan Manuel Fangio’s long-standing record of five championships during the 1950s.  In 2005, Eurobusiness proclaimed Schumacher the “world’s first billionaire athlete.”  One of the nicest champions in Formula One is also one of the most generous, as the Red Baron has contributed millions of Euros to various causes aimed at helping children, the poor and victims of natural disasters.

Mr. Schumacher retired from competitive racing in 2006.  Four years later, he returned to F1 before retiring permanently in October 2012.  In December 2013, Schumacher suffered a traumatic head injury while skiing with his son in the French Alps.  Despite wearing a helmet, his head hit a rock in a massive fall.  Schumacher was placed in a medically-induced coma, from which he has since emerged, but the most successful Grand Prix driver in history is paralyzed and in a wheelchair, unable to speak and suffering memory problems.

Michael Schumacher is the most decorated driver in the history of his sport.  He set new standards for Formula One.  Ross Brawn, who was with Schumacher for almost all of his career, said, “Michael changed the landscape of F1 drivers.  He raised the bar.”  Schumacher won seven world titles—most of all time—including a record five in a row between 2000 and 2004.  He has the most wins in a single season [13 in 2004] and is the only driver in F1 history to finish in the top three in every race of the season.  Schumacher has 91 Grand Prix wins—40 more than Alain Prost, who is second on the list.  He led 5,114 laps, over 2,000 more than Ayrton Senna, who is second.  “Schuey” has more poles [68] and podiums [155] than any driver in F1 history and was twice named Laureus World Sportsman of the Year.  Michael Schumacher is still the yardstick for measuring Formula One success.

On this date in 1994, Michael Schumacher beat Damon Hill by a single point to win the World Championship at the Australian Grand Prix.  It was the first of a record seven Driver’s titles Schuey would win in his hall of fame career.

“Just being a mediocre driver has never been my ambition.  That’s not my style.” – Michael Schumacher, seven-time F1 World Champion