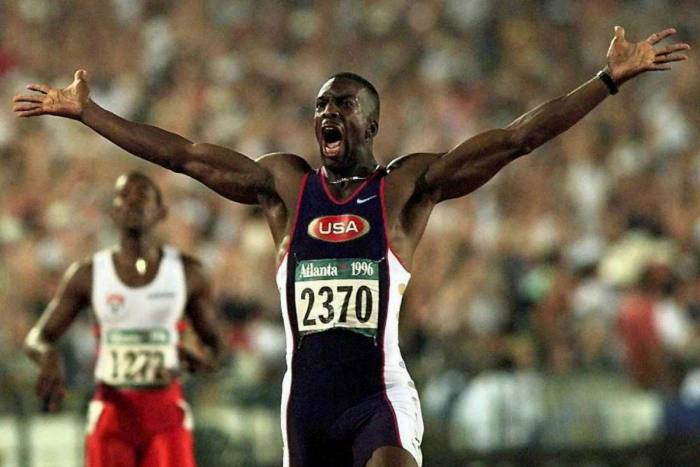 Happy 49th birthday to the only man in track & field history ever to win the 200 and 400 meter dashes in the same meet.

Michael Duane Johnson was born in Dallas, Texas, on this date in 1967.  He was the youngest of five children raised by a father who was a truck driver and mother who taught school.  As a child, Johnson wore black horn-rimmed glasses, attended classes for gifted children and wanted to be an architect.  He was teased for being a “nerd” and avoided team sports.  “MJ” attended Dallas’ Skyline High School, where he was one grade ahead of Larry “Grandmama” Johnson, who would go on to win the 1991 Wooden Award and become the first pick of the NBA Draft.  After not participating in athletics during his first two years at Skyline, Johnson landed a spot on the track team in his junior year, running the 200 and sprint relays.  As a senior, he won a district title and caught the eye of legendary Baylor track coach Clyde Hart, who liked Johnson’s intelligence, character and work ethic.

Johnson arrived at Baylor in late summer 1986.  In his very first 200 meter race, he ran 20.41 to break the school record.  Johnson went on to win several NCAA titles in both indoor and outdoor sprints and relays.  As he prepared for the 1988 Summer Olympics, Johnson developed a stress fracture of his left fibula and failed to qualify for the U.S. team.  After winning indoor and outdoor titles in his senior year, Johnson graduated from Baylor in 1990 with an accounting degree.

At the 1991 World Championships in Tokyo, Johnson won his first world title in the 200.  The following year, he entered the 1992 Barcelona Games as the favorite at that distance, but contracted food poisoning before the Games.  Dehydrated and weak, Johnson failed to reach the 200 meter final but recovered in time to win a gold medal as part of the 4 x 400 relay team.  Less than a year later, he ran the second leg of the 4 x 400 meter relay at the 1993 World Championships in 42.91, which remains the fastest 400 meters in history.  At the 1995 World Championships in Gothenburg, Johnson won gold in the 200 and 400 meters to become the first male athlete in history to win at those distances in the same meet.  In the 200 meter final at the 1996 Olympic Trials, Johnson ran 19.66 to break Pietro Mennea’s 17-year-old record of 19.72.  He also won the 400, qualifying him for two individual events and a relay in the Atlanta Games six weeks later.

Michael Johnson ran in the 1996 Olympics wearing custom-made gold shoes.  Weighing three ounces each, the left shoe was size 10 ½, while the right one was an 11 to account for his shorter left foot.  On the evening of July 29, “The Man With the Golden Shoes” breezed to the 400 meter title while setting a new Olympic Record.  Three days later, he lowered his own world record in the 200 meters by more than three-tenths of a second, the largest improvement ever on the 200 meter record.  Experts compared the performance to Bob Beamon’s record-shattering long jump at the 1968 Mexico City Games and his mark of 19.32 stood for a dozen years, until Usain Bolt broke it in 2008.  Following the Games, Johnson won the 1996 Sullivan Award as best amateur athlete in America and was named ABC’s Wide World of Sports [Daily Dose, 7/8/15] Athlete of the Year.

Johnson won his third straight 400 meter world championship in 1997.  Two years later in Seville, he captured his fourth with a new world record time of 43.18, which still remains unbeaten.  Johnson successfully defended his 400 meter title at the 2000 Sydney Olympics while becoming–at 33 years 12 days–the oldest gold medalist in any track event shorter than 5,000 meters in Olympic history.  He also anchored the winning 4 x 400 relay team, only to have the gold medal stripped eight years later after three of the members—excluding Johnson—were found guilty of having used PEDs.  Mr. Johnson retired following the 2000 Games.

Michael Johnson is one of the greatest sprinters in the history of track & field.  He is the only man to win the 200 and 400 meter races in the same Olympics and is the only man to successfully defend a 400 meter Olympic title.  Has there ever been a greater 400 meter sprinter than MJ?  Between 1993 and 2000, he won 58 straight races.  Johnson broke 44 seconds for 400 meters 22 times, more than twice as many times as any other athlete.  His 43.18 world record stood for nearly 17 years until it was lowered to 43.03 by South African’s Wayde van Niekerk in the 2016 Rio Games.  Johnson is the only sprinter ever to be ranked number one in the world at 200 and 400 meters in the same year, and he did it four times.  He is the only man to break 20 seconds in the 200 and 44 seconds in the 400 at the same meet [1999 World Championships].  Johnson ran 200 meters in under 20 seconds 23 times in his career.  He won eight world championship titles and captured four Olympic gold medals, second only to Bolt for most-ever by a sprinter.  In 2008, Michael Johnson voluntarily returned the gold medal he earned as part of the U.S. team that won the 4 x 400 meter relay at the 2000 Olympics, saying he felt, “cheated, betrayed and let down” by his teammates who had cheated.  He was elected to the U.S. Track & Field Hall of Fame in 2004, where his 200 meter performance at the 1996 Olympics was named the greatest track and field performance of the last 25 years.