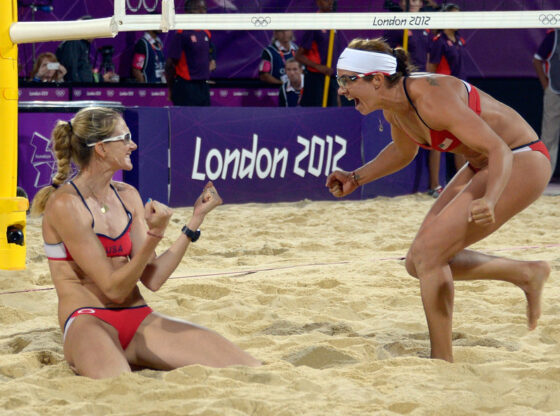 Misty May-Treanor and Kerri Walsh-Jennings are the greatest tandem in beach volleyball history.

Born in Los Angeles, California, on July 30, 1977, Misty Elizabeth May grew up in an athletic family. Her father, Bob “Butch” May, played on the 1968 U.S. Men’s National Volleyball Team and her mother, Barbara, was a nationally-ranked tennis player. May first played volleyball at Santa Monica Pier Beach at eight and also competed in soccer and tennis. Her childhood babysitter was Olympic volleyball player Karch Kiraly, a family friend. May attended Newport Harbor High School in Costa Mesa, where she finished second in the high jump at the California state championships. She also led the Sailors to state indoor volleyball titles in 1992 and 1994. May was named Division I All-CIF High School Player of the Year in 1993 and, as a senior, was named best player in the nation by USA Today. May headed up the coast to play indoor volleyball for Long Beach State. In 1998, she captained the 49ers to the national championship and first undefeated season [36-0] in the history of NCAA women’s volleyball. The 5’-9” setter was named Most Outstanding Player of the 1998 NCAAs, Player of the Year in both 1997 and 1998 and was a three-time All-American. Upon graduation from LBSU, “The Turtle” competed in the 1999 Pan Am Games as part of the U.S National indoor team but quit shortly thereafter to try her hand at the beach game. May teamed with 1996 Olympian Holly McPeak to qualify for the Sydney Games in 2000, where they finished fifth after losing in the quarterfinals.

Kerri Lee Walsh was born in Santa Clara, California, on August 15, 1978. Her mother was a two-time MVP of the varsity volleyball team at Santa Clara University and her father was a former minor league baseball and semi-pro basketball player. She grew up in nearby Saratoga before returning to San Jose to attend Archbishop Mitty High School, alma mater of Brandi Chastain [Daily Dose, October 8], star of the U.S. Women’s National Soccer Team. Walsh led Archbishop Mitty to three indoor volleyball state titles between 1993 and 1995 and led the Monarchs to a state basketball crown in 1995. After being named 1996 National Volleyball Player of the Year, Walsh enrolled at Stanford University, where she won national titles in 1996 and 1997. She was a four-time All-American, Final Four MVP in 1996 and co-National Player of the Year in 1999 before graduating from Stanford with a degree in American studies in 2000. Later that summer, she played for the U.S. women’s indoor volleyball team in the Sydney Games, finishing fourth.

Misty May and Kerri Walsh competed against each other in college and were reunited in Sydney in 2000. The following year, May decided to split with Holly McPeak and approached Walsh about teaming up with her in the sand. Walsh agreed, and the duo played the 2001 season in Europe, finishing number five in the world on the Federation Internationale de Volleyball [FIDV] tour. By 2002, they won the FIVB tour championship and became the top-ranked team in the world. The “Dynamic Duo” joined the U.S.-based Association of Volleyball Professionals [AVP] tour in 2003, going 39-0 and winning eight tournaments, including an upset of Brazil to capture the gold medal at the World Championships in Rio. Riding a 90-match win streak, May and Walsh continued their domination at the 2004 Olympics in Athens, winning all seven matches without losing a single game en route to the gold medal. May was named Most Outstanding Player of the tournament before marrying Matt Treanor, a major league baseball catcher, in November. The following December, Walsh married pro beach volleyball player Casey Jennings. Misty and Kerri went on to successfully defend their FIVA world titles in 2005 and 2007. In the 2008 Beijing Games, they became the only beach volleyball team to repeat as gold medalists, going undefeated and beating the top-seeded Chinese team. In 2009, May-Treanor ruptured her Achilles tendon while rehearsing for Dancing With the Stars. After taking a year off to recuperate, she reunited with Walsh Jennings and qualified for the 2012 London Olympics, where they three-peated as beach volleyball gold medalists. May-Treanor retired following the medal ceremony.

Misty May-Treanor and Kerri Walsh Jennings are the first American team to win an Olympic gold medal in beach volleyball, first to repeat as gold medalists and first tandem to win three consecutive Olympic golds in the history of the sport. During their 11-year run together, they won 112 straight matches and three world championships. In Olympic competition, they won three gold medals, 21 consecutive matches and 34 of 35 sets. May-Treanor was named Most Outstanding Player at both the 2004 and 2008 Olympics, where she sprinkled her late mother’s ashes on the courts following the tournaments. She was inducted into the Long Beach State Athletic Hall of Fame in 2004, gave birth to a daughter in June 2014 and is currently an assistant volleyball coach at USC. Walsh Jennings continues to compete on the pro tour, where she is a 6’3” “kill machine.” She was five weeks pregnant with her third child—a daughter—during the 2012 London Games and is a member of the Stanford Athletics Hall of Fame. The Women’s Sports Federation named Misty May-Treanor and Kerri Walsh Jennings co-Sportswomen of the Year in both 2004 and 2006.