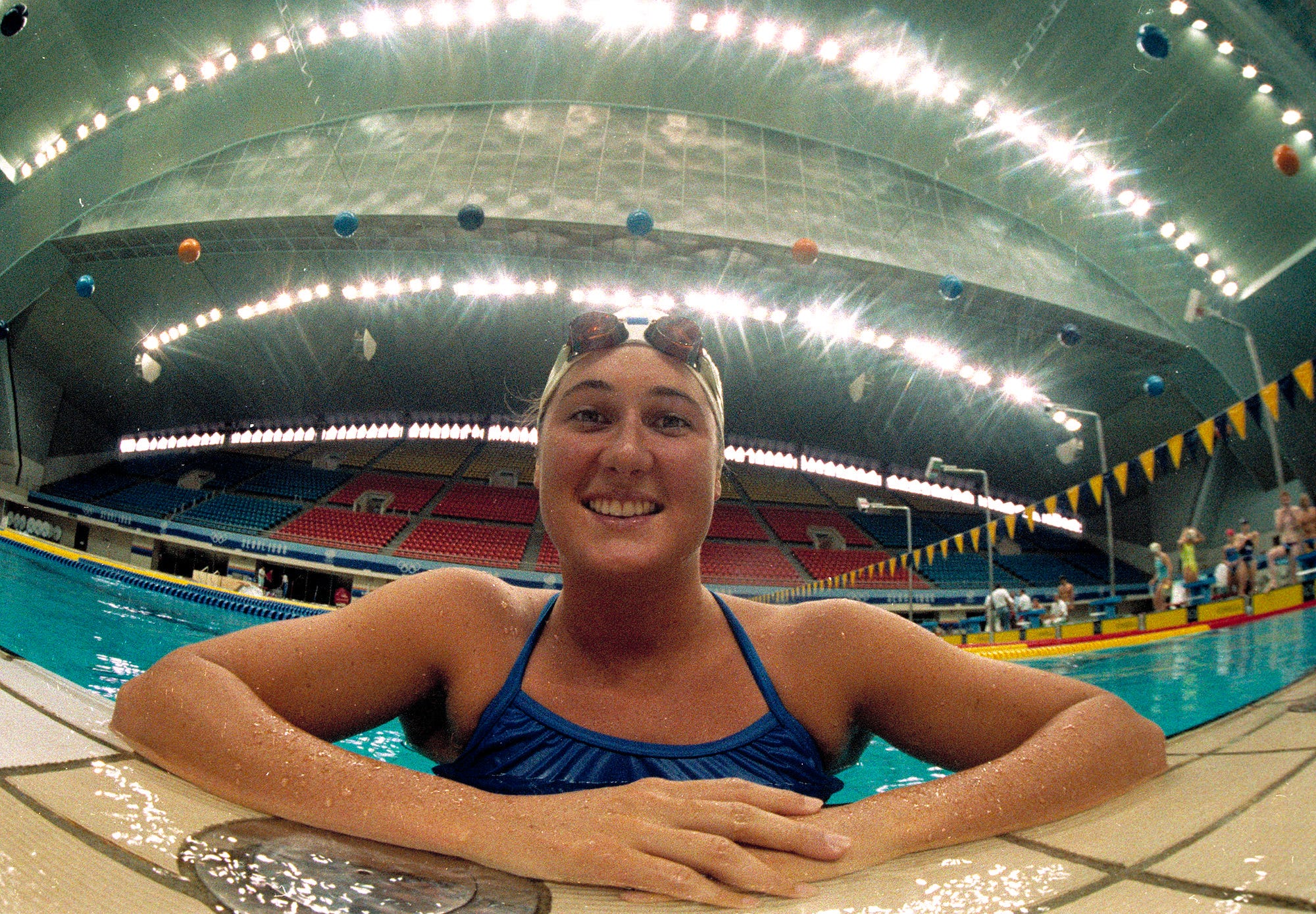 Mary T. Meagher is the greatest butterfly swimmer ever.

“Madame Butterfly” competed in two Olympic Games, winning three gold medals in Los Angeles in 1984 and claiming a bronze and a silver in Seoul four years later.  She would likely have won both butterfly events [100 and 200 meter] in 1980 had the U.S. not boycotted the Moscow Games.  Meagher [MAW-her] exuded a level of unprecedented dominance, putting together a string of untouchable record-breaking swims that have only been matched by Katie Ledecky.  She took butterfly to the stratosphere and her impact is still felt in the sport today.  A 24-time national champion, Meagher set seven world records.  She won two World Championships and was twice voted Female World Swimmer of the Year.  Meagher won an NCAA title in each of her four years at Cal, and was a two-time Honda Award winner as the nation’s most outstanding college female swimmer.

In July 1979, 14-year-old Mary T. Meagher – nicknamed “Fishy” by her friends — traveled to San Juan, Puerto Rico, to compete in the Pan Am Games.  She was accompanied by a stuffed green frog named Bubbles.  Just an eighth-grader, she went 2:09.77 in the 200m butterfly to break the great Tracy Caulkins’ world record, then lowered her own world mark four times over the next 25 months.  Her Pan Am Games time [2:09.77] still stands as the 13-14 national age group record 38 years later.

Swimming records fall faster than those in other sports, often lasting only until the next heat.  At the 2012 London Olympics, nine new world records were set in the pool.  In the first four days of the 2016 Rio Games, six world marks were broken.  Since 1972, roughly ten percent of Olympic track and field events resulted in a world record.  In swimming, the number of new world records is close to 40 percent.  Improvements in technology, stroke mechanics, diet and training has led to faster times in the pool.  Since 1912, the world record in the men’s 100m freestyle has improved by nearly 24 percent.  In track, the record for the men’s 100 meters has dropped less than ten percent in that same period.

One of the most enduring world records ever set – and arguably the most dominant in the history of swimming – was by Mary T. Meagher in August 1981, when she swam the 200m butterfly in 2:05.96.  Her effort was Beamonesque [see: Bob Beamon, 1968 Olympic long jump] and was voted the fifth- greatest single event performance of all time by Sports Illustrated.  The record stood until May 2000 – nearly 19 years – when it was broken by Susie O’Neill of Australia.  It remained the American record until 2009.  Meagher’s mark still stands as the 15-16 national age group record and is the second-fastest time ever for an American woman in the event.  Thirty-five years later, the time would easily have qualified for the 2016 U.S. Olympic team and would have just missed out on a medal in Rio.

Meagher’s epic swim came at the 1981 U.S. Nationals in Brown Deer, Wisconsin.  At the same meet, Mary T. set a world record of 57.93 in the 100m butterfly, lowering her own world mark by over a second.  It stood for 18 years until Jenny Thompson eclipsed it in 1999.  “I didn’t think they would last so long,” Meagher said of her records years later, “especially as I always swam in a natural way.”

Born in Louisville, Kentucky, October 27, 1964, Mary Terstegge Meagher is the 10th of 11 children born to Jim, a two-time basketball letterman at Notre Dame, and Floy.  She began swimming at five, competing for the Lakeside swim team in Louisville and later trained under coach Dennis Pursley with the highly-regarded Cincinnati Marlins Swim Club.  After graduating Sacred Heart Academy, an all-girls Catholic high school in Louisville, the 5’8”, 140-pound butterflyer accepted a swim scholarship to the University of California-Berkeley, where she had a decorated collegiate career.

Madame Butterfly spent a decade as the best butterfly swimmer in the world.  She is the best butterflyer in  history, setting remarkable records in a grueling discipline.  Combining speed and stamina never before seen in her event, she dominated the way Katie Ledecky does today.  With five Olympic medals, nine World Championship medals, and 24 U.S. titles, she set records that were so unreachable they stood for nearly two decades.

Meagher finished third in the 200m butterfly at the 1988 Seoul Games, but her 2:09.13 at the U.S. Olympic Trials that year was faster than the gold medal-winning time of Germany’s Kathleen Nord.  Meagher, whose sister Anne Northup was a U.S. Congresswoman, is married to former speed skater Mike Plant and lives in Peachtree City, Georgia.  The Mary T. Meagher swim complex is named in her honor in Louisville, and a street is named in her honor in Elizabethtown, Kentucky.

“Every athlete I’ve ever known had some form of weakness, but Mary was the exception.”
– Dennis Pursley, voted one of the 25 most influential people in history of USA Swimming