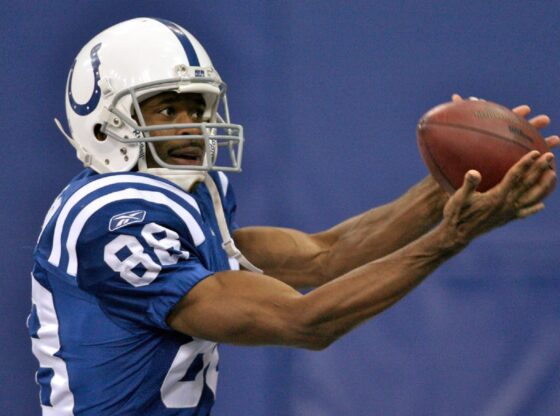 The greatest receiver in the history of the Baltimore/Indianapolis Colts celebrates his 43rd birthday today.

Marvin Daniel Harrison was born in Philadelphia, Pennsylvania on this date in 1972. He attended Roman Catholic High School in Philly’s inner city, where he only missed one day of school in his life, and played football and basketball there. He was heavily recruited by Penn State and Notre Dame but chose Syracuse University, where he played from 1992-95. He was a three year starter at wide receiver and played with quarterback Donovan McNabb in his senior season. Harrison had 2,718 career receiving yards, a school record, and ranked second in Orange history in receiving touchdowns with 20. Harrison was the fourth receiver taken in the first round of the 1996 NFL Draft, one that is considered amongst the richest in history at the wide receiver position, where Keyshawn Johnson, Terry Glenn, Eric Moulds, Terrell Owens, Jermaine Lewis and Amani Toomer were all selected. Each has made at least one Pro Bowl and the group has a total of 26 appearances. Harrison was selected by the Indianapolis Colts with the 19th overall pick.

As a rookie, he started in 15 of 16 games and caught 64 passes for 836 yards and 8 touchdowns. He led the NFL in receiving yards [1,663] and caught 115 passes while making First-Team All Pro in his fourth season. The following year, he tied for the league-lead in receptions and scored 14 touchdowns. In 2002, he broke Herman Moore’s single season receptions record by 20 catches, led the league in receiving yards and was voted First-Team All Pro and NFL Alumni Wide Receiver of the Year. The Colts made the playoffs in five of Harrison’s first eight years in the league before breaking through and winning Super Bowl XLI in 2006, a year in which Harrison caught 95 passes for nearly 1,400 yards and 12 touchdowns. He was durable, only missing two games in his first 13 years in the NFL. In 2008, he passed Tim Brown for third on the all-time NFL receptions list and, in late December of that year, passed Chris Carter for second on the list. He asked the Colts for his release following the 2008 season and, after sitting out the entire 2009 campaign, retired from football.

Marvin Harrison played in eight Pro Bowls, twice led the NFL in receptions, twice led in receiving yards and holds numerous NFL records. He is the Colts’ all-time leader in receptions, receiving yards and touchdowns and was inducted into the club’s Ring of Honor in 2011. He is currently in third place on the NFL’s list for career receptions [behind Jerry Rice and Tony Gonzalez]. He spent his entire 13 year career with the Colts and was a finalist for the Pro Football Hall of Fame class of 2014.