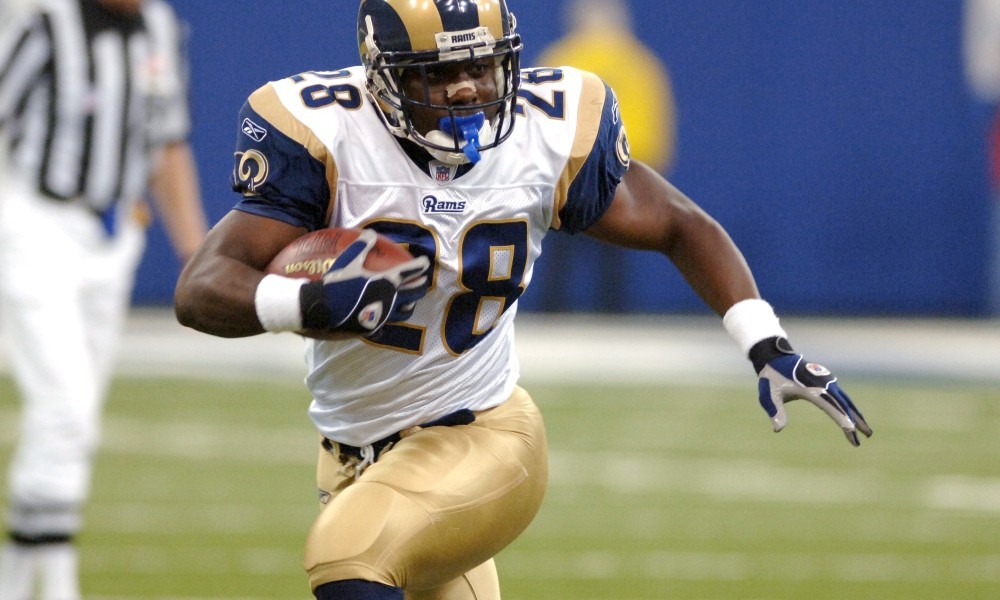 On this date in 1991, a freshman playing in just the second game of his career set a new NCAA single game rushing record.

Marshall William Faulk was the youngest of Cecile and Roosevelt Faulk’s six boys.  Born in New Orleans February 26, 1973, his parents divorced when Marshall was four.  Cecile moved with her sons to the Desire Housing Projects, one of the most crime-ridden projects in the U.S.  “All I knew was that I had clothes on my back, shoes on my feet, food to eat and a roof over my head,” recalled Faulk.  He started playing football at seven and was a standout player at multiple positions by the time he enrolled at George Washington Carver High School in New Orleans’ Ninth Ward, the area most severely ravaged by Hurricane Katrina in 2005.  Faulk starred as an All-American defensive back at Carver and also ran track, where he was timed at 10.3 seconds in the 100 meters, 21.74 over 200 and 49.4 in the 400 meters.  He also played running back.

In autumn 1990, Curtis Johnson, wide receivers coach at San Diego State University, discovered Faulk while in town recruiting another player.  Johnson returned to campus and showed game tape to SDSU head coach Al Luginbill, who said, “We need to have this kid.”  While several colleges offered Faulk a scholarship as a defensive back, only San Diego State offered him the chance to play running back, the position he wanted to play.  “Why did I choose San Diego State?” said Faulk.  “San Diego State chose me.”  In summer 1991, 17-year-old Marshall Faulk left the gang-infested projects of New Orleans for the sunny beaches of Southern California.

Entering the 1991 season, senior T.C. Wright was the starter in San Diego State’s single-back offense.  Little was expected of Faulk, and Wright got most of the reps in practice.  Faulk didn’t even run with the scout team.  After thumping Long Beach State in the season opener, the Aztecs hosted the University of Pacific Tigers in week two.  With 3:55 remaining in the first quarter, Wright injured his thigh and was replaced by the freshman Faulk, who treated the 24,408 fans at Jack Murphy Stadium to the one of the greatest single-game performances in college football history.

In 1981, Florida State’s Greg Allen rushed for 322 yards against Western Carolina to set, what was then, college football’s single-game mark.  Against Pacific, Marshall Faulk surpassed Allen’s total before the end of the third quarter.  Faulk—who had never scored more than five touchdowns in high school–scored on runs of 9, 5, 61, 7, 47, 2 and 25 yards—seven touchdowns in all—along with a two-point conversion, giving him a single-game freshman record 44 points.  He finished the night with 386 yards, surpassing the NCAA record that Indiana’s Anthony Thompson set against Wisconsin in 1989, when he carried 52 times for 377 yards.  Faulk ran 37 times to get his record.  “I didn’t sense it until the third touchdown,” said Faulk.  “I was like, ‘Golly, this kind of stuff doesn’t happen much to freshmen.” Following SDSU’s 55-34 victory, Faulk was made the starter, while T. C. Wright was relegated to returning punts.  Pacific, which had given up 264 rushing yards to West Texas State’s Eugene “Mercury” Morris in 1967, dropped football following the 1995 season, citing budgetary reasons.

Marshall Faulk rushed for 1,429 yards and scored 23 touchdowns as a freshman.  No freshman in history broke the 1,000-yard barrior faster: Faulk gained 1,157 yards in just seven games, surpassing Emmitt Smith’s freshman mark of 1,011 in the same number of games.  Faulk averaged 159 rushing yards per game, eclipsing Hershel Walker’s freshman record of 147 per contest.  Mr. Faulk became the first freshman in history to lead the nation in rushing and scoring and joined Tony Dorsett [Daily Dose, 4/7/16] and Hershel Walker as the only frosh ever to be named first-team All-American.  In a 2012, Athlonsports.com rated Faulk the second-best freshman in college football history, behind Walker and ahead of Johnny Manzel.

In three seasons at San Diego State, Faulk gained over 5,500 all-purpose yards and scored 62 touchdowns, eighth most in NCAA history.  In 1992, he finished second to Gino Torretta in Heisman Trophy balloting despite being the finest player in college football.  Gino Torretta!!  After being selected by the Indianapolis Colts with the second overall pick in the 1994 NFL Draft, Mr. Faulk went on to become NFL Offensive Rookie of the Year.  He was twice named NFL MVP, played in seven Pro Bowls, and won a Super Bowl with the St. Louis Rams.  Faulk is the only player in NFL history to amass 12,000 yards rushing and 6,000 yards receiving.  Marshall Faulk had his jersey number retired by San Diego State and the St. Louis [now Los Angeles] Rams and has been enshrined in the Indianapolis Colts Ring of Honor.  He was elected to the Pro Football Hall of Fame in 2011.

“Marshall Faulk is the best college running back in the country, by far.  I’d vote for him right now for the Heisman Trophy.”-  Dallas Cowboys running back Emmitt Smith, in 1991