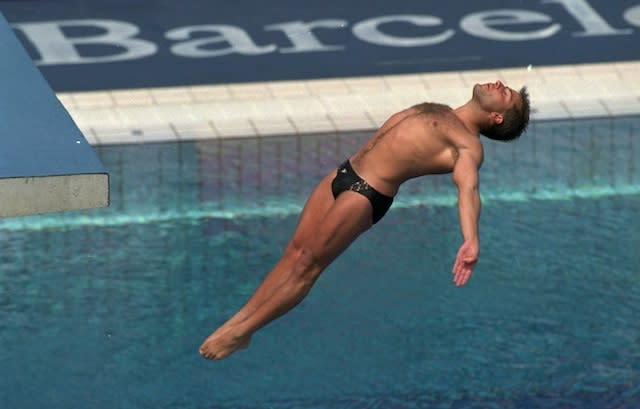 Like the United States of America, Mark Lenzi sought freedom, independence and the pursuit of happiness.

Mark Edward Lenzi was born in Huntsville, Alabama, on this date in 1968.  Bill and Ellie moved their four children to Fredericksburg, Virginia, where Mark became a superb wrestler.  He enjoyed the competition but did not enjoy starving himself to make weight.  While watching the 1984 Olympics on television, he became inspired by Greg Louganis [Daily Dose, January 29, 2016] and decided to take up diving, creating a messy conflict with his father.  “My dad wanted me to wrestle because he thought I could get a college scholarship.  We argued so bad that I left home for two weeks and stayed with a friend.  Then my dad compromised and said I could do both.”  Lenzi attended Stafford High School in Falmouth, Virginia, alma mater of Jeff Rouse, an Olympic gold medalist and former owner of three swimming world records.  At 16, he joined the Indians swim & dive team.  Lenzi entered his first diving competition, won, and received five college scholarship offers. “My dad said, ‘OK, you’re diving, not wrestling.”  Lenzi never wrestled again.  Supremely talented, with an even greater determination, he made a rapid climb up the diving ladder.

In 1986, Lenzi accepted a scholarship to Indiana University, where he trained under the legendary Hobie Billingsley, who coached six Olympic medalists.  In 1989, he swept the Big Ten diving events, winning the one-meter, three-meter and platform competitions.  After winning the one-meter national title, Lenzi was named 1989 NCAA Diver of the Year.  He also won a gold medal in one-meter springboard at the 1989 FINA Diving World Cup.  Billingsley, who is one of the most influential figures in the history of diving, said, “The tougher the competition, the better he would dive.”  The 5’5”, 146 pound Lenzi repeated as Big Ten and NCAA champion the following year, and was named 1990 NCAA Diver of the Year after winning the one-meter springboard title.  He made his first U.S. National Team in 1989 and graduated IU the following year.  “No one has ever learned that quick and done so much,” Billingsley marveled.  In 1991, Lenzi began diving under Dick Kimball, who had coached Louganis to gold at the 1984 Los Angeles Olympics.  After claiming silver in the one-meter springboard competition at the World Championships in January 1991, Lenzi took gold at the FINA World Cup.  In August, won the one-meter title at the Pan Am Games in Havana.  Less than one year later, the “Tasmanian Devil” won the gold medal in three-meter springboard at the 1992 Barcelona Olympics.  Bill Lenzi, who was sitting in the stands that day, said, “Sometimes, maybe parents don’t know what is best for their kids.”  Lenzi returned to the Olympics in 1996, earning a bronze medal in the three-meter.  He retired following the Atlanta Games and coached diving at Indiana, Clemson and East Carolina.

Mark Lenzi started diving at 16, far later than most who excel at the sport.  Former high school and Olympic teammate Jeff Rouse said, “He was the essence of the Cinderella story.  In a sport like diving, where they start so young, it says a lot for how talented he was and how hard he worked.”  Olympic teammate Scott Donie observed, “The diving world has never seen anything like him.  He came out of nowhere and in three years he was World Cup champion.  That’s unheard of.  Within six years, he won the Olympics.  Unbelievable.”  Lenzi won five Big Ten titles and eight national championships.  He earned two Olympic medals—including one gold–and 18 international springboard championships.  At the 1991 U.S Indoor Championships, Lenzi successfully completed a 3 ½ reverse tuck [307C] to become the first diver in history to score over 100 points on a single dive.  He is the first American to successfully complete a forward, 4 ½ somersault [109C] in competition and is the first diver to score more than 700 points in an eleven-dive competition on the three-meter board.  In March 2012, Mr. Lenzi suffered fainting spells and a severe drop in blood pressure.  He was taken to a hospital in his hometown of Greenville, North Carolina, where he lost consciousness and never regained it.  He died April 9, 2012.  Mark Lenzi was 43 and is survived by his wife, Dorothy.  Mr. Lenzi was inducted into Indiana University’s Athletics Hall of Fame and joined his former coaches Hobie Billingsley and Dick Kimball in the International Swimming Hall of Fame in 2003.

“My umbilical cord was tied in a knot, so I was doing somersaults in my mother’s stomach.  I was born to be a diver.”- Mark Lenzi 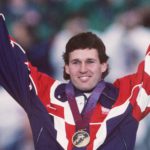