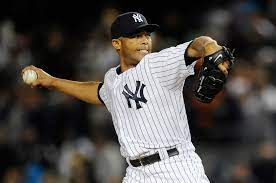 Happy 47th birthday to the greatest closer in the history of Major League Baseball.

Mariano Rivera played 19 seasons, all for the New York Yankees.  He appeared in 13 All-Star Games and is baseball’s all-time leader in saves [652] and games finished [952].  Rivera led the majors in saves three times and won five Rolaids Relief Man awards as the best relief pitcher in baseball.  Along with Derek Jeter, Jorge Posada, and Andy Pettite—the “Core Four”—Rivera came up through the Yankees minor league system and made his big league debut in 1995.  The Core Four were key contributors to the Yankee dynasty that won four World Series titles in five years and made 15 postseason appearances in 16 seasons.

Born in Panama City, Panama, on this date in 1969, Mariano was the second of Mariano Sr. and Delia Rivera’s four children.  His father was captain of a fishing boat and the family lived in Puerto Caimito, a poor fishing village along the southern coast of Panama.  As a child, Rivera’s first love was soccer and Pele [Daily Dose, 10/3/16] was his idol.  At 12, his father bought him his first leather baseball glove.  Rivera dropped out of high school in ninth grade and started working six days a week fishing for sardines on his father’s boat.  After falling overboard he gave up fishing and, in 1988, joined Panama Oeste, a local amateur baseball team, as a hobby.  Originally a shortstop, he was moved to pitcher, where he attracted the attention of a scout for the New York Yankees.  Impressed with his athleticism and fluid motion, the Yankees signed him to a $ 3,000 contract in February 1990.  Rivera weighed 155 pounds, threw 85 miles per hour and, by his own account, was “not even a pitcher.”  He had never been out of Panama and spoke no English when he flew to the U.S. to report to the Yankees rookie team in the Gulf Coast League.

Hoyt Wilhelm—the first relief pitcher ever elected to the Baseball Hall of Fame—was Rivera’s first pitching coach.  Pitching primarily in relief in his first year in the Rookie League, Rivera recorded 58 strikeouts with only seven walks in 52 innings of work.  His 0.17 ERA led the league.  By 1994, he had reached Triple-A Columbus, where the Core Four were united for the first time.  Rivera, who primarily threw fastballs, was considered the ninth-best prospect in the Yankees organization when he made his major league debut in May 1995.  After four starts, his ERA was 10.20, and he was sent back down to Columbus, where he somehow gained six miles per hour on his fastball.  Rivera, who attributed the inexplicable improvement “to God,” returned to the big leagues in July 1995, appearing in 19 games his rookie season.

After spending the 1996 season as set-up man to John Wetteland, the Yanks made Rivera their closer in 1997.  It would be a role he fulfilled for 17 seasons.

The “cutter” is a fastball that breaks toward a pitcher’s glove side as it reaches home plate.  Thrown faster than a slider and with more movement than a fastball, it can be a devastating pitch for a batter to handle.  Rivera discovered the cutter while playing catch with a teammate in June 1997.  After initially trying to straighten it out, he learned to embrace the pitch that would dominate baseball for the next decade-and-a-half.  “Super Mario” threw the best cutter of any pitcher in history.  It moved away from right-handed hitters, resulting in weak ground balls or pop-ups if contact was made at all, and bore in on the hands of lefties, often breaking their bats.  Jim Thome [Daily Dose, 8/27/15] called it “the single best pitch ever in the game,” while ESPN’s Buster Olney described it as “the most dominant pitch of a generation.”  Opposing managers would often eschew conventional wisdom and send right-handed hitters to face the right-handed Rivera, believing lefties had no chance.  Rivera’s cutter—ranked “the best out pitch in baseball” by ESPN.com—was so nasty that opposing hitters chose to face him with batting practice bats rather than risk their best bats being shattered.

Armed with his cutter, “Mo” led the Yanks to World Series titles in 1996, 1998, 1999, 2000 and 2009.  He finished in the top three in voting for the Cy Young Award [Daily Dose, 7/6/16] four times.  Rivera was the most dominant reliever of all time, pitching with a consistency and longevity uncharacteristic of a closer.  WHIP—walks and hits per innings pitched—is a baseball metric used to reflect a pitcher’s propensity for allowing batters to reach base .  In 19 big league seasons, Super Mario posted a WHIP of 1.00, the best ranking of the live ball [post 1920] era.  Another telling statistic is strikeout-to-walk ratio, which measures a pitcher’s ability to control pitches.  The average major league pitcher records two strikeouts for every walk allowed.  Mariano Rivera—who combined an unhittable pitch with pinpoint control—had the sixth-best strikeout-to-walk ratio in history.  In 96 career postseason games, Rivera struck out 110 batters while only issuing 21 bases on balls and allowing only 11 earned runs.

Rivera hinted at retirement during spring training in 2012 but reversed his decision after tearing the ACL and meniscus in his knee while shagging fly balls during batting practice in early May.  Many feared his injury would be career-ending, but Mo vowed to return, promising, “I am not going down like this.”  He returned the following year, earning All-Star Game MVP and Comeback Player of the Year honors in 2013.  The greatest relief pitcher in MLB history retired following the 2013 season.

Mariano Rivera has more saves than Hall of Famers Rollie Fingers and Goose Gossage combined.  A five-time World Series champion, he was especially wicked in the postseason.  Mo recorded the final out of four World Series, twice as many as any other pitcher.  He pitched in a record 96 postseason games [Jeff Nelson is next on the list with 55], recorded 42 saves [two dozen more than Brad Lidge, who is second on the list with 18] and has a career ERA of 0.70—lowest in postseason history.  In 17 seasons as the Yankees ace reliever, Rivera closed out 16 postseason series.  Metallica’s “Enter Sandman” blared over the Yankee Stadium PA system whenever Rivera took the field, and when “Sandman” entered, it was over.  Jeter called him the most mentally tough teammate he ever played with.  Mr. Rivera is the only player in major league history to be named MVP of a World Series, League Championship Series, and All-Star Game.  He was virtually unhittable, recording 30 or more saves in 15 seasons.  When asked to describe his job, the unflappable Panamanian replied, “I get the ball, throw the ball, and then I take a shower.”

In 2013, the Yankees retired Rivera’s Number 42.  He was the last major league player to wear the number following its league-wide retirement in honor of Jackie Robinson.